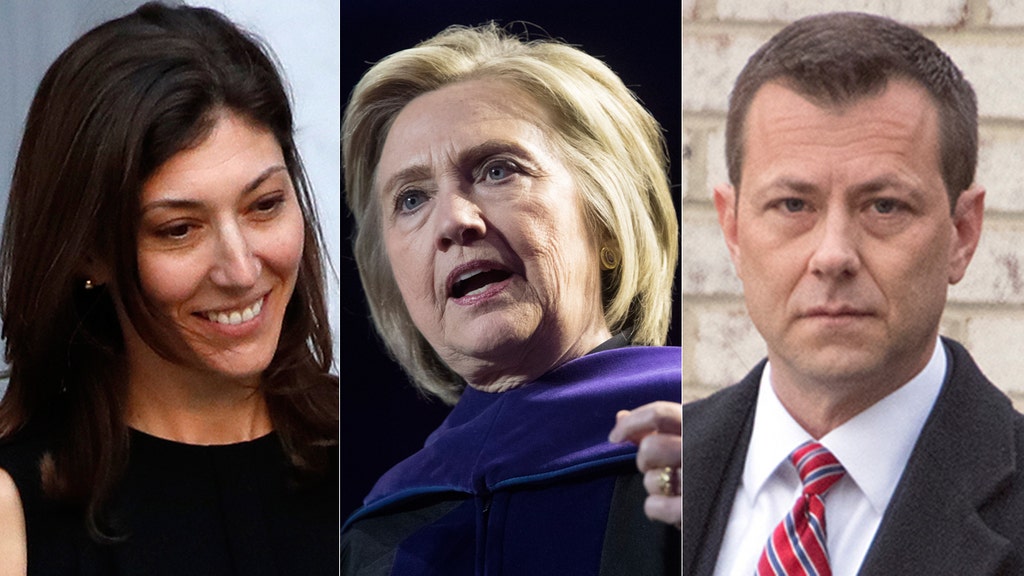 
Internal FBI emails released Monday show FBI officials in 2016 sought to “expeditiously” accommodate a request for information from then-Democratic presidential candidate Hillary Clinton’s lawyer, in what a conservative watchdog group claimed is evidence of “special treatment.”
Judicial Watch – a group that routinely sues for government records – obtained and released 218 pages of emails between former FBI officials Peter Strzok and Lisa Page. Many of the emails have to do with the bureau’s investigation into whether Clinton improperly used a private email server as secretary of state to discuss classified information.
FBI SCRAMBLED TO RESPOND TO HILLARY CLINTON LAWYER AMID WEINER LAPTOP REVIEW, NEWLY RELEASED EMAILS SHOW
The emails involve discussions about so-called “302s” – reports written by the FBI after witness interviews. In one email, Page curiously acknowledged that four such 302 reports relating to the Clinton investigation “had never been written.” She didn't go into detail about why the reports weren’t written, or say which witnesses the 302s would have been about.
There have been previous concerns about missing investigative material related to the Clinton case. In 2016, Fox News reported that two “bankers boxes” of Clinton’s emails went missing during the investigation.
The emails released Monday, meanwhile, show then-FBI General Counsel James Baker writing that he spoke with Clinton’s lawyer, David Kendall, in August 2016 and promised that the FBI would work to hand over a copy of the 302 from Clinton’s interview “expeditiously.”

Republican senators seek probe of intel agencies in Russia leaks; chief intelligence correspondent Catherine Herridge reports from Washington.
On August 16, 2016, he wrote: “I just spoke with David Kendall … I conveyed our view that in order to obtain the documents they are seeking they need to submit a request pursuant to the Privacy Act and FOIA.”
Baker added, “David asked us to focus first on the Secretary’s 302. I said OK," noting that they would "get the 302 out the door as soon as possible."
The emails show officials discussing how to appropriately handle the request, with one official suggesting the FBI process it in a way “consistent” with other requests. In an Aug. 21, 2016 email, Baker acknowledged that he planned to give Kendall a heads up before they posted the Clinton interview 302 publicly online.
“I said we would alert him shortly before it appeared on our website,” Baker wrote.
Several days later, before the 302 went public, the FBI’s FOIA unit chief said he approved of the plan, writing, “I don’t see a problem with giving a Kendall a heads up.”
On Sept. 2, 2016, the bureau released Clinton’s 302 report to the public on its website, explaining it was doing so in an effort to be transparent.
“We are making these materials available to the public in the interest of transparency and in response to numerous Freedom of Information Act (FOIA) requests,” the FBI wrote on its site at the time.

Still, Judicial Watch, in a statement, said the emails show the FBI gave “special treatment” to Clinton just before the election.
“These incredible documents show the leadership of the FBI rushed to give Hillary Clinton her FBI interview report shortly before the election,” Judicial Watch president Tom Fitton said in a statement. “And the documents also show the FBI failed to timely document interviews in the Clinton email ‘matter’ – further confirming the whole investigation was a joke.”
The FBI has faced accusations of giving special treatment to Clinton's team before.
Internal FBI emails released by Judicial Watch earlier this year showed the agency's highest-ranking officials scrambling to answer Kendall in the days prior to the 2016 presidential election, on the same day then-FBI Director James Comey sent a bombshell letter to Congress announcing a new review of hundreds of thousands of potentially classified emails found on former Rep. Anthony Weiner's laptop.
Fox News’ Gregg Re contributed to this report.
Source>https://www.foxnews.com/politics/strzok-page-emails-show-gaps-in-clinton-probe-files-alleged-special-treatment-for-her-lawyer
Posted by theodore miraldi at 5:06 PM