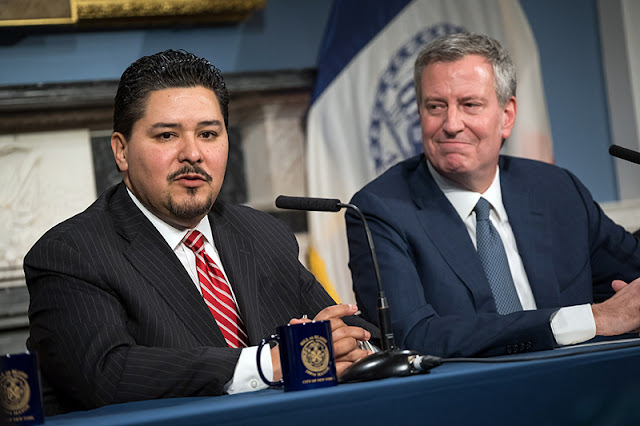 It’s blatantly illegal under federal and state anti-discrimination law, but a job listing on Indeed.com sought only “teachers of color for the 2019-2020 school year” for work in Community School District 1. Sure sounds like the Carranza Department of Education.
Yes, the DOE denies direct responsibility for the post, which linked to a job fair invitation from Irene Sanchez, the principal at PS 15 Roberto Clemente. And her invite hinted in the same direction: “We are committed to diversifying our teaching staff.”
Chancellor Richard Carranza is too experienced to put out a “no whites (or Asians) need apply” sign. But he told the DOE brass to “get on board with my equity platform or leave” when he arrived last June.
Then he demoted top white officials, replacing them with blacks and some Hispanics. And some of those new aides spent millions on “implicit bias” training for educrats and teachers. Training that warns managers against “white supremacy culture” and reportedly instructs teachers to pay more attention to black students than to white ones.
Meanwhile, Carranza routinely charges that anyone opposing his plans for racial re-engineering of school admissions is “racist.”
In short, the new chancellor is setting an unmistakable tone, and it’s clearly filtering down. Bias and bigotry will rule the day as long as he’s in charge.
Source>https://nypost.com/2019/06/04/the-tone-for-this-illegal-ad-came-from-the-top-of-doe/
Posted by theodore miraldi at 7:48 AM