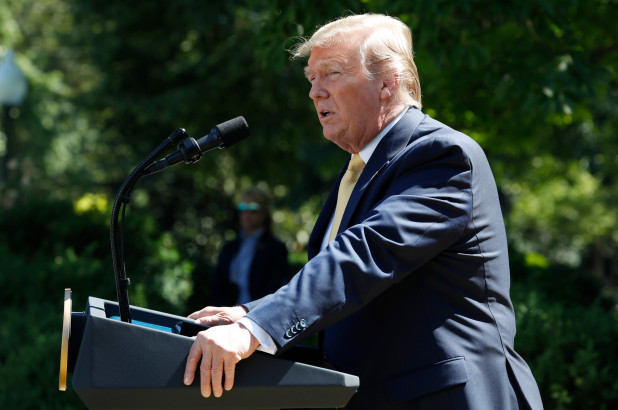 
President Trump said on Monday that the Immigration and Customs Enforcement Agency will start to remove from the United States millions of immigrants who have entered the country illegally.
“Next week ICE will begin the process of removing the millions of illegal aliens who have illicitly found their way into the United States,” the president tweeted on Monday night.
“They will be removed as fast as they come in.”
Trump said that Mexico uses “strong immigration laws” to stop Central American migrants from entering the US. He also claimed “Guatemala is getting ready to sign a Safe-Third Agreement.”
An administration official, who spoke on the condition of anonymity, said the effort would focus on the more than 1 million people who have been given final deportation orders, but remain in the country.
It was not clear on Monday night whether Trump was referring to the existing deportation process or whether ICE would implement a new “removal” policy.
The “Safe-Third Agreement” would require Guatemala to accept refugees from neighboring Honduras and El Salvador. US rights group Human Rights First called the idea “simply ludicrous.”
Trump also implored the opposition party to help him confront the immigration crisis.
“The only ones who won’t do anything are the Democrats in Congress,” Trump wrote.
“They must vote to get rid of the loopholes, and fix asylum! If so, Border Crisis will end quickly!”
With Post Wires
Source>https://nypost.com/2019/06/17/trump-ice-to-start-removing-millions-of-illegal-aliens/
Posted by theodore miraldi at 7:58 AM