This Fourth of July, WHY Have We LOST Our PATRIOTISM 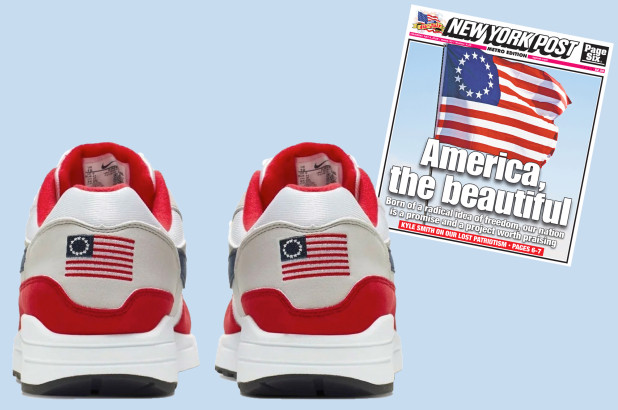 
For the haters, it’s open season on the American ideal.
Colin Kaepernick doesn’t like today’s American flag because it reminds him of police brutality and he doesn’t like Betsy Ross’ O.G. flag because it reminds him of slavery. I’m starting to think maybe Colin Kaepernick is not so fond of the flag, or of the country that made him rich.
Nike supported him by withdrawing the Betsy Ross-flagged sneaker. That’s right, the American flag, in any form, is now apparently a toxic symbol. The governor of California, Gavin Newsom, actually praised Nike.
Meanwhile, the Charlottesville City Council just voted to stop celebrating Thomas Jefferson’s birthday in the city where he died on the 50th anniversary of the Declaration of Independence he wrote. American patriotism has just reached a record low entirely because of Democrats, of whom only 22% say they’ve “extremely proud” of their country. To celebrate the Fourth, America’s most prominent newspaper is bidding for the trolling Hall of Fame by running a video, titled “Please stop telling me America is great,” that argues how America is “just OK.”
Remember the distant past of 2016, when leading voices of progressivism were saying, “America never stopped being great” (Hillary Clinton) and “America is already great” (Barack Obama)? All that’s over.
American military, economic and cultural power dominates the world (you’ve never heard of the biggest movie made by China or France this year, but they’ve certainly heard of “Avengers: Endgame”). America leads the world in Nobel laureates, and it isn’t close. America leads the world in the success of our middle class, and it isn’t close. True, America has more poor people than some other countries — but that’s because we let in millions of people from poor countries. Saying “America has a poverty problem” is like saying, “Florida has a high death rate.” Florida doesn’t kill people, it just attracts a lot of old ones.

“What about slavery?” is not an irrelevant question to ask about American history. Slavey is indeed our original sin. It’s important. We fought a war over it. You may have heard of it.
But to think of slavery first when you think of American history is like thinking of Charles Manson first when you think of men. America accomplished a few good things as well. America is a radical idea that had never come close to being implemented before — a broad-based democracy with government engineered for the purpose of zealously protecting our natural, or God-given, rights. We zoomed out ahead of the rest of the world, and we never looked back. As late as 1870, only 40% of the men in Britain were entitled to vote. Voting in America was not universal until women got the vote in 1920, but the US was miles ahead of everybody else in allowing its people to be heard.
Even more important, the US was and is miles ahead when it comes to allowing its people to speak. In Britain, people can and do get thrown in jail for things they’ve said on Twitter. (The 2003 Communications Act makes it a crime to type mean things on the internet. No, you don’t get a break for being young, or drunk, or for thinking you’re being darkly funny. The police actually monitor social media looking for people to arrest.) A 2014 headline in The Guardian reads, “Is it right to jail someone for being offensive on Facebook or Twitter?” No, it isn’t right. It is in fact quite wrong, and in America it is unthinkable because we have the world’s strongest protections for speech.
The First Amendment, like everything else about America, has not always worked perfectly (Woodrow Wilson threw Eugene V. Debs in jail under the Sedition Act for opposing World War I) but is a great and noble ideal, and we are far closer to living up to its full potential now than we ever have been in the glorious history of this exceptionally wonderful country.

American patriotism is at a record low: poll

Don’t take it from me; ask the world. A Gallup survey notes that 150 million people, or one out of 25 adults on the planet, would move to the US if they could. That’s more than the next four countries combined. “America remains unusually attractive to people from all over the world — in a way to which no other country compares,” Gallup reported.
Everybody knows America is number one, which is why, even among the hating class of Americans, no one ever leaves. Ta-Nehisi Coates and Spike Lee haven’t moved to France. Gavin Newsom isn’t moving to Mexico. Colin Kaepernick isn’t moving to Cuba. Lena Dunham, Bryan Cranston, Barbra Streisand and all the other celebrities who threatened/promised to move to Canada are still here. Hell, we can’t even get the Canadian-born whiners and haters (like Seth Rogen and Jim Carrey) to move back.
America didn’t complete the project of freedom on that broiling day in Philly, but that’s like saying your kid’s first day of school is no big deal because your kids can’t do algebra yet. On July 4, 1776, we began setting up the greatest opportunity for human flourishing the world has ever known, and our example continues to be the world’s beacon. The United States of America isn’t perfect. We’re merely the best.
Source>https://nypost.com/2019/07/03/this-fourth-of-july-why-have-we-lost-our-patriotism/
Posted by theodore miraldi at 7:04 PM