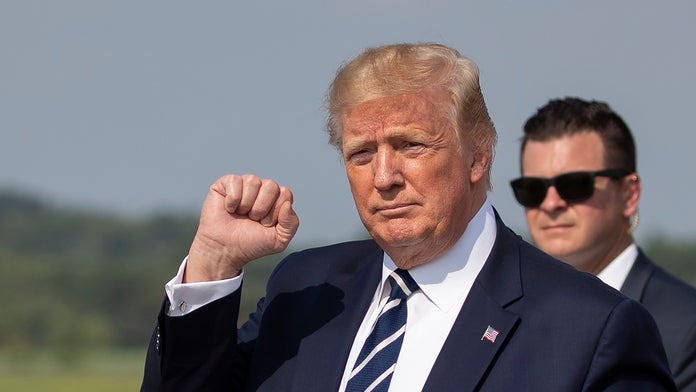 
A federal judge decided Wednesday to leave in place a Trump administration rule that imposes restrictions on individuals seeking asylum in the United States if they passed through a third country on their way to the border between the U.S. and Mexico, potentially leading to a sharp reduction in Central American migrants entering the country.
The rule, published in the Federal Register last week, requires people seeking asylum to first apply in one of the countries they pass through on their way to the U.S., with certain exceptions. The rule was quickly met with a legal challenge from advocacy groups, who moved for a temporary restraining order blocking the rule. After a hearing in Washington, D.C. federal court, District Judge Timothy J. Kelly denied the motion. The rule will remain in place for the duration of the case, unless the decision is successfully appealed.
LINDSEY GRAHAM CLAIMS BORDER FRAUD SO PREVALENT 'A TERRORIST COULD EASILY GET IN'
"We are disappointed in the court's decision today," said Claudia Cubas, litigation direction for the Capital Area Immigrants' Rights Coalition.
Kelly, who was appointed to the bench by President Trump said the immigrant advocate groups who filed the lawsuit did not show that their work would be irreparably harmed if the policy moved forward.
With certain exceptions, the rule requires individuals to apply for and be denied asylum in another country in order to apply in the U.S. That means that migrants from Central American nations who travel through Mexico – who make up a significant portion of recent asylum seekers – will not be eligible for asylum in America unless they previously applied for asylum in Mexico or any other country they traversed and were turned down.
The new rule’s exceptions include certain cases of human trafficking.
The rule is meant to crack down on asylum seekers coming to the U.S. more for economic reasons than to escape persecution in their home countries. Administration officials say this could help close the gap between the initial asylum screening that most people pass and the final decision on asylum that most people do not win. The goal in part is to allow quicker determinations in these cases.
The policy follows the Trump administration's Migrant Protection Protocols, commonly referred to as the "remain in Mexico" policy. Under that policy, asylum seekers were often told to go back to Mexico to await hearings, rather than be allowed to remain in the U.S.
TRUMP ADMINISTRATION AIMS TO EXPAND FAST-TRACK DEPORTATIONS ACROSS US, LEGAL FIGHT EXPECTED
Democrats railed against that policy, with 2020 hopeful Beto O'Rourke calling it "inhumane."
A reduction in asylum seekers would ease the burden on federal agencies currently overwhelmed by the volume of individuals seeking entry into the U.S.
Detention facilities have been notoriously stretched for resources, resulting in outcries against the government. The criticism has particularly been strong when it comes to the conditions in which migrant children have been kept.
Fox News' Judson Berger and The Associated Press contributed to this report.
Source>https://www.foxnews.com/politics/trump-admin-scores-win-over-move-to-limit-asylum-claims
Posted by theodore miraldi at 6:43 PM