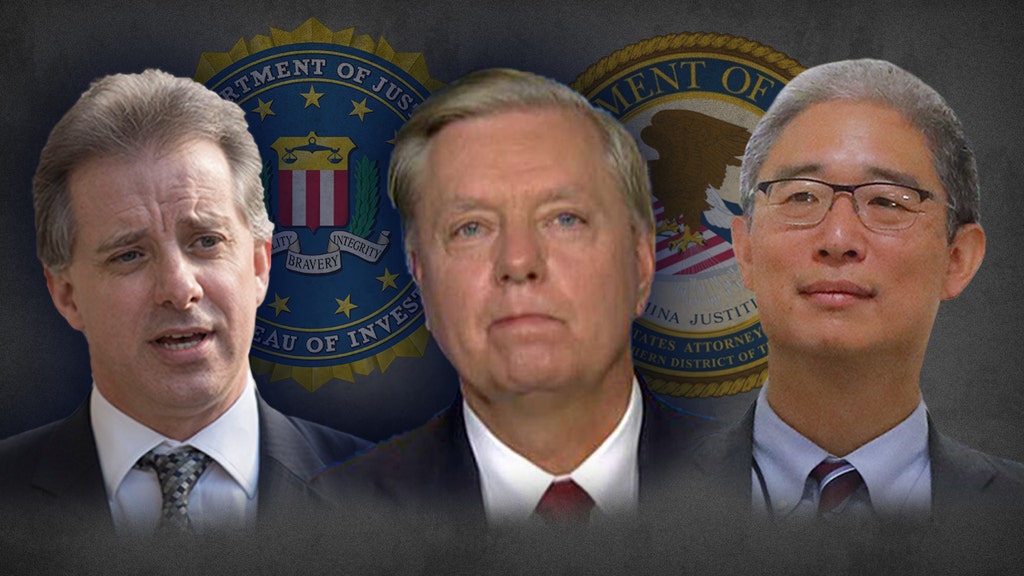 
New documents highlighting top Justice Department official Bruce Ohr's contact with ex-British spy Christopher Steele are the latest troubling development for the DOJ in 2016.
That's the claim from Sen. Lindsey Graham, R-S.C., chairman of the Senate Judiciary Committee, who said Thursday on "Hannity" that he believes there was deep corruption in the department during that year's U.S. presidential election.
"Here's what we're looking at: Systematic corruption at the highest level of the Department of Justice and the FBI against President Trump and in favor of Hillary Clinton," Graham said.
FBI KEPT USING STEELE DOSSIER FOR FISA APPLICATIONS DESPITE DOCUMENTING EX-SPY'S BIAS, DOCUMENTS SHOW
Host Sean Hannity then asked Graham whether officials "lied purposefully" on a Foreign Intelligence Surveillance Act (FISA) warrant application to surveil former Trump campaign aide Carter Page.
"The best you could say is that they were incompetent," Graham responded. "The most likely outcome is that they wanted a result."

Video
"I think the insurance policy is what we're seeing here, getting into the Trump campaign," Graham continued. "The FISA warrant against Carter Page was a fraud, I believe. The counter-intelligence investigation is something we have to look at very closely."
On Thursday evening, newly released records obtained by Fox News showed the FBI formally documented the bias of Steele shortly after the November 2016 presidential election, yet continued to use his unverified dossier in multiple FISA court warrant application renewals.
The documents, first obtained by Judicial Watch, also reveal that top Justice Department official Bruce Ohr maintained contact with Steele for at least six months after Steele was fired by the FBI for unauthorized media contacts in November 2016.
CLICK HERE TO GET THE FOX NEWS APP
The summaries of FBI interviews with Ohr, known as 302s, show that Ohr knew by September 2016 -- a month before the initial application to surveil the Trump campaign -- that Steele was "desperate" that Donald Trump not be elected president.
A source close to the matter told Fox News "this had the effect of putting a senior DOJ official on notice that a witness/source had an extreme bias" -- yet the FISA warrant application went through in October 2016 with multiple renewals.
In his interview with Hannity, Graham claimed if a Republican operative acted in a way similar to Steele, the news would receive wall-to-wall media coverage.
"You could not turn on your television," he said.
Fox News' Gregg Re and Catherine Herridge contributed to this report.
Source>https://www.foxnews.com/media/graham-new-bruce-ohr-docs-fisa-warrant
Posted by theodore miraldi at 7:47 AM