DETROIT – High-profile Obama administration alumni pointedly warned the Democratic presidential candidates to “be wary of attacking” the popular two-term president’s record, in the wake of Wednesday's debate where top-tier contenders bashed his legacy in a bid to score points against former Vice President Joe Biden.

While all 10 White House hopefuls on stage during the second night of back-to-back Democratic nomination debates fired away at Republican President Trump, Barack Obama’s name was invoked 23 times during the showdown.
Some of those mentions were made by front-runner Biden, who touted administration achievements during the two terms he served as Obama’s vice president. But many came from rivals who took shots at Biden by tying him to polices that have fallen out of favor with progressives as the Democratic Party’s base drifts further left.
BIDEN TAKES JABS FROM ALL SIDES DURING DEBATE
Specifically coming under attack were ObamaCare – the president’s signature domestic policy achievement that dramatically transformed health care in America – and the Obama administration’s policy of stepped-up deportations of illegal immigrants.

Video
Former Chicago Mayor Rahm Emanuel – who served as Obama’s first White House chief of staff – on Thursday morning called the jabs by fellow Democrats “nuts.”
Emanuel told Fox Business Network's "WSJ At Large," in an interview airing Friday at 9:30 p.m., that his former boss “is at 90-odd percent among Democrats. He’s the most successful progressive president … since the Great Society.”
And Eric Holder – who served as attorney general for much of Obama’s presidency – issued a warning on Twitter.

To my fellow Democrats. Be wary of attacking the Obama record. Build on it. Expand it. But there is little to be gained - for you or the party - by attacking a very successful and still popular Democratic President.


30.5K people are talking about this
“To my fellow Democrats. Be wary of attacking the Obama record. Build on it. Expand it. But there is little to be gained - for you or the party - by attacking a very successful and still popular Democratic President,” Holder wrote.
Biden himself weighed in on Thursday, saying “I must tell ya' I was a little surprised at how much incoming about Barack ... I’m proud of the job he did. I don’t think there’s anything he has to apologize for and ... it kind of surprised me the degree of the criticism.”
He said the notion that Obama's immigration policies are somehow comparable to Trump's is "bizarre" and added, "There's nothing moderate about what Barack did with ObamaCare."

Video
While the nation’s first African-American president occasionally takes aim at Trump, he’s largely stayed silent as a record-setting two-dozen candidates battle for the Democratic nomination.
Biden often invokes Obama on the campaign trail. As he repeatedly took incoming fire from most of the other contenders on stage in Detroit, the former vice president noted "everybody is talking about how terrible I am on these issues.” He then touted that "Barack Obama knew exactly who I was. He had 10 lawyers do a background check on everything about me on civil rights and civil liberties, and he chose me, and he said it was the best decision he made. I'll take his judgment."
Democratic White House hopeful Julian Castro, the former San Antonio, Texas mayor who later served in the Obama Cabinet as Housing and Urban Development secretary, also praised his former boss.
“We've now had about 105 straight months of positive job growth, the longest streak in American history,” Castro noted. “Over 80 months of that was due to President Barack Obama. Thank you, Barack Obama.”
But Castro – who’s making the divisive issue of illegal immigration central to his White House bid – jabbed at Biden for failing to speak out at the time over the Obama-era deportations of illegal immigrants. Biden praised Obama’s overall policies on the issue of illegal immigration and pushed back, saying he never heard any dissent against the deportations by Castro.

2020 Watch: Asked about his #immigration tiff with @joebiden - @JulianCastro tells @foxnewspolitics after tonight's #DetroitDebate "one of us on that stage actually did criticize things that the Obama administration was dong & one of us did not. I did" #JoeBiden #julianCastro 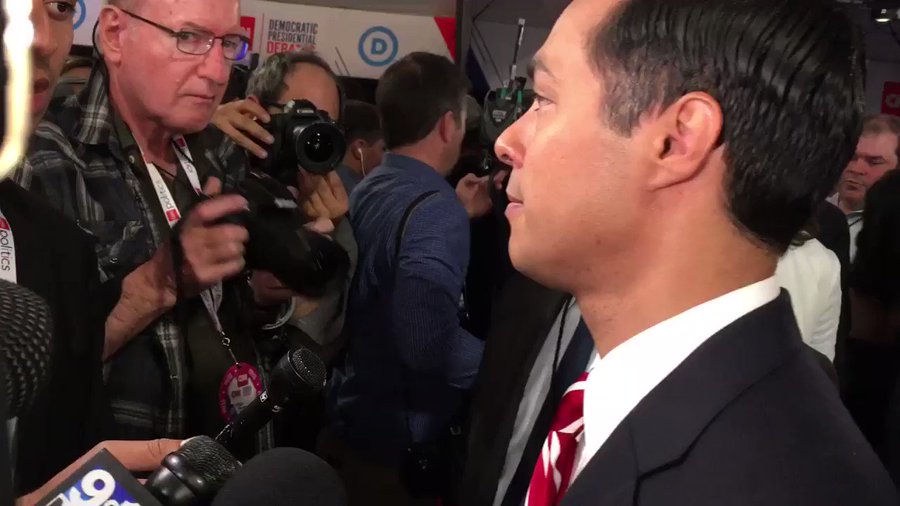 
15 people are talking about this
“One of us on that stage did criticize things the Obama administration was doing and one did not. I did in 2014 and he did not,” Castro told Fox News after the debate. “It’s very clear as between Vice President Biden and me when it comes to immigration, I learned the lessons of the past and Vice President Biden did not. He is still stuck in the past.”
Castro wasn’t the only one on the stage shining a spotlight on the deportations. New York City Mayor Bill de Blasio repeatedly questioned Biden whether he used his clout as vice president to fight the deportations.

2020 Watch: NYC @BilldeBlasio -after the #DetroitDebate -takes aim at Obama-era #Deportations -telling @foxnewspolitics “a lot of people feel in communities all over this country that there were too many deportations and that they weren’t fair" #DemDebate #Immigration 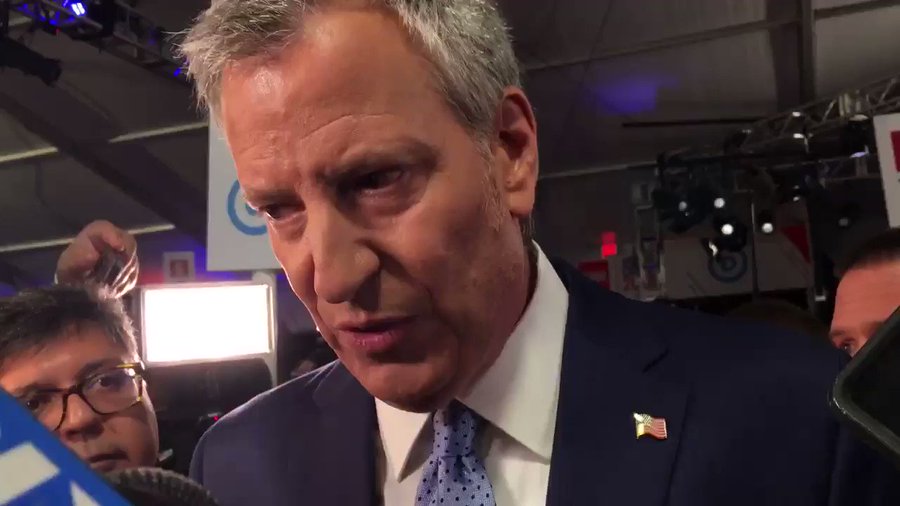 
See Paul Steinhauser's other Tweets
“When I was asking the vice president a bunch of tough questions, I don’t know what the heck he was saying. I didn’t get answers,” he said after the debate.
Taking a shot at Obama, de Blasio told Fox News that “a lot of people feel in communities all over this country that there were too many deportations and that they weren’t fair. And that a lot of people who hadn’t done anything wrong were deported.”
Sen. Cory Booker of New Jersey – who lately has become a very vocal Biden critic – also called out the former vice president for not detailing his discussions with Obama regarding deportations.
“You can't have it both ways. You invoke President Obama more than anybody in this campaign. You can't do it when it's convenient and dodge it when it's not,” Booker said point-blank to Biden.
It wasn’t just the candidates. As Biden began to explain his role in the deportations, multiple protesters in the audience briefly shouted "3 million deportations.”
Biden – the only top-tier contender who doesn’t support a government-run "Medicare-for-all" plan – during the debate played the role of chief defender of the Affordable Care Act. Biden wants to enhance ObamaCare by adding a public option but still keep the system in place.
The law – which has been weakened since Trump took over in the White House – has increasingly been criticized by Sens. Bernie Sanders of Vermont and Elizabeth Warren of Massachusetts, who are pushing Medicare-for-all plans that would replace private insurance with a single-payer system.
Sen. Kamala Harris of California – who proposes a hybrid Medicare-for-all plan – took a punch at ObamaCare as she stood next to Biden on Wednesday night.
"Senator Biden, your plan will keep and allow insurance companies to remain with status quo, doing business as usual, and that's going to be about jacking up co-pays, jacking up deductibles," Harris said.
The targeting of Obama and his achievements isn’t sitting well with many who served under the former president.
Center for American Progress President Neera Tanden – who served as a senior official on Obama’s 2008 presidential campaign and senior adviser in his administration – noted on Twitter that “the GOP didn't attack Reagan, they built him up for decades.”

The GOP didn't attack Reagan, they built him up for decades. Dem Candidates who attack Obama are wrong and terrible. Obama wasn't perfect, but come on people, next to Trump, he kind of is.

This is my outrage of the day.


4,610 people are talking about this
And she highlighted that “Dem Candidates who attack Obama are wrong and terrible. Obama wasn't perfect, but come on people, next to Trump, he kind of is. This is my outrage of the day.”
Lynda Tran, who ran communications for the Obama-tied Organizing for America and served as a senior official in his administration, said “comparing President Obama to Donald Trump on either [immigration or health care] is deeply disingenuous.”
Tran, a founding partner of the communications firm 270 Strategies, predicted that attacks on Obama will diminish as the Democratic 2020 field gets smaller.
“As the field looks to winnow sharply ahead of the September debates, it’s clear several candidates were hoping to force some daylight between Joe Biden and Barack Obama given the former president’s continued and soaring popularity,” she said. “They were generally unsuccessful and I suspect those who remain in the race this fall will take a different approach moving forward.”
Source>https://www.foxnews.com/politics/obama-allies-dem-candidates-blast-legacy-to-score-points-on-biden
Posted by theodore miraldi at 4:55 PM