Barack spanks 'leaders who demonize those who don't look like us'


In the wake of this weekend’s mass shootings in Dayton, Ohio, and El Paso, Texas, that left dozens dead, former President Barack Obama issued a scathing attack Monday on the rhetoric allegedly used by President Donald Trump to describe immigrants and some minorities in America.

“All of us have to send a clarion call and behave with the values of tolerance and diversity that should be the hallmark of our democracy,” Obama said on Twitter.

“We should soundly reject language coming out of the mouths of any of our leaders that feeds a climate of fear and hatred or normalizes racist sentiments; leaders who demonize those who don’t look like us, or suggest that other people, including immigrants, threaten our way of life, or refer to other people as sub-human, or imply that America belongs to just one certain type of people.

“Such language isn’t new- it’s been at the root of most human tragedy throughout history, here in America and around the world. It is at the root of slavery and Jim Crow, the Holocaust, the genocide in Rwanda and ethnic cleansing in the Balkans. It has no place in our politics and our public life. And it’s time for the overwhelming majority of Americans of goodwill, of every race and faith and political party, to say as much – clearly and unequivocally.”

Though Obama did not mention Trump by name, but the intended audience was obvious.

Obama continued: “Michelle and I grieve with all the families in El Paso and Dayton who endured these latest mass shootings. Even if details are still emerging, there are a few things we already know to be true.

“First, no other nation on Earth comes close to experiencing the frequency of mass shootings that we see in the United States. No other developed nation tolerates the levels of gun violence that we do. Every time this happens, we’re told that tougher gun laws won’t stop all murders; that they won’t stop every deranged individual from getting a weapon and shooting innocent people in public places. But the evidence shows that they can stop some killings. They can save some families from heartbreak. We are not helpless here. And until all of us stand up and insist on holding public officials accountable for changing our gun laws, these tragedies will keep happening.

“Second, while the motivations behind these shootings may not yet be fully known, there are indications that the El Paso shooting follows a dangerous trend: troubled individuals who embrace racist ideologies and see themselves obligated to act violently to preserve white supremacy. Like the followers of ISIS and other foreign terrorist organizations, these individuals may act alone, but they’ve been radicalized by white nationalist websites that proliferate on the internet. That means that both law enforcement agencies and internet platforms need to come up with better strategies to reduce the influence of these hate groups.” 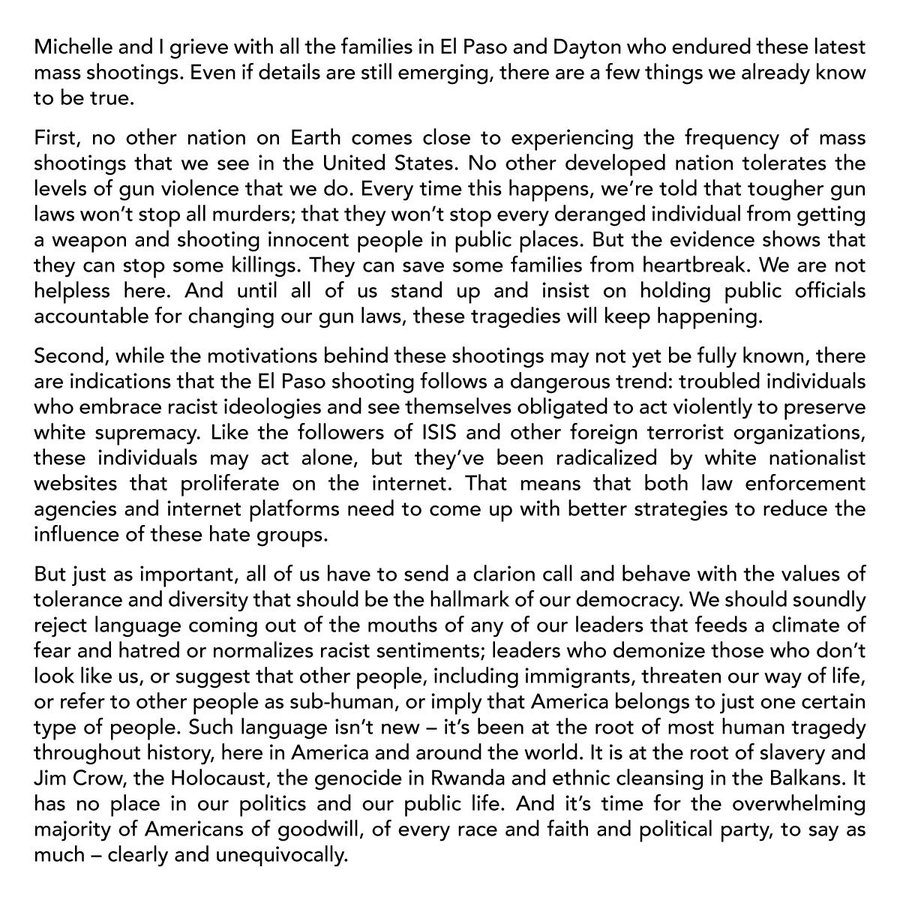 Meanwhile, Trump on Monday placed blame for the attacks on the internet, computer games, social media and “mental illness” for the horrific killings that left at least 30 dead.

“Mental illness and hatred pulls the trigger, not the gun,” Trump said.

“The shooter in El Paso posted a manifesto online, consumed by racist hate. In one voice our nation must condemn racism, bigotry and white supremacy.”

“These sinister ideologies must be defeated. Hate has no place in America. Hatred warps the mind, ravages the heart and devours the soul,’ he added.

He also blamed the media and “fake news.”

“The Media has a big responsibility to life and safety in our Country,” Trump tweeted. “Fake News has contributed greatly to the anger and rage that has built up over many years. News coverage has got to start being fair, balanced and unbiased, or these terrible problems will only get worse!”

Posted by theodore miraldi at 5:24 PM