Obamas accused of ‘'Deplorable Behavior’ amid trademark dispute: 'Not consistent with the values they preach' 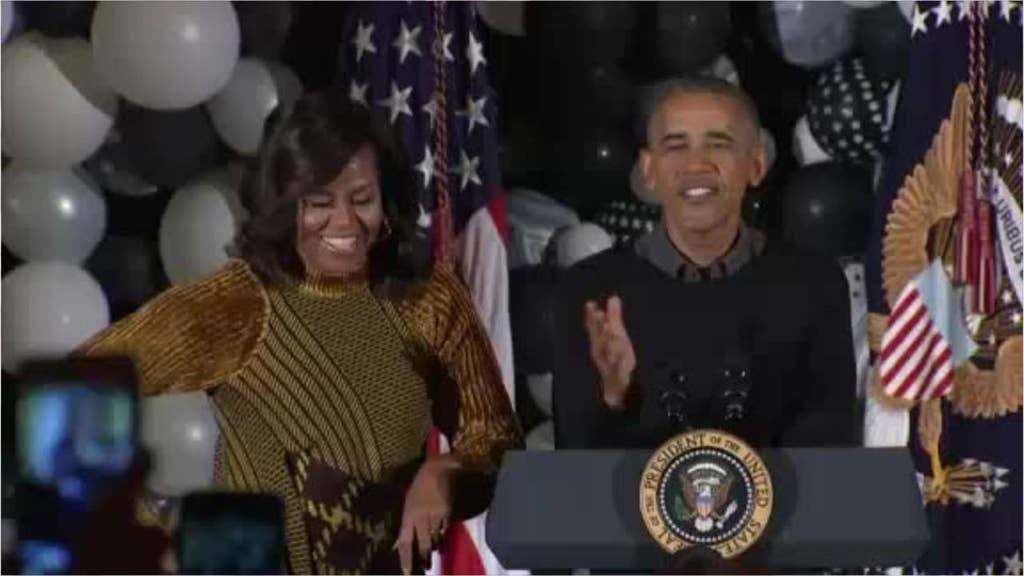 Barack and Michelle Obama have been accused of “deplorable behavior” by a Los Angeles entertainment attorney for filing a “meritless petition” amid a trademark dispute over the name of their company, Higher Ground Productions.


“This is really deplorable behavior. I hope that the Obamas realize that these actions are not consistent with the values they preach and that they instruct their attorneys to immediately dismiss the petition," attorney Larry Zerner told Fox News in a statement that was first given to The Hollywood Reporter.


“This is really deplorable behavior. I hope that the Obamas realize that these actions are not consistent with the values they preach and that they instruct their attorneys to immediately dismiss the petition."
— Larry Zerner

Zerner told Fox News that the “Obamas have known for almost a year” that their Higher Ground Productions trademark application was rejected by the U.S. Patent & Trademark Office because it was too similar to his client’s Higher Ground Enterprises.
“Instead of simply picking another name, the Obamas' lawyers have now filed a meritless petition to cancel my client's trademark so they can take it for themselves,” Zerner said.
Zerner told Fox News that his client’s motive is “not political” and Higher Ground Enterprises simply wants to keep its name and avoid confusion. 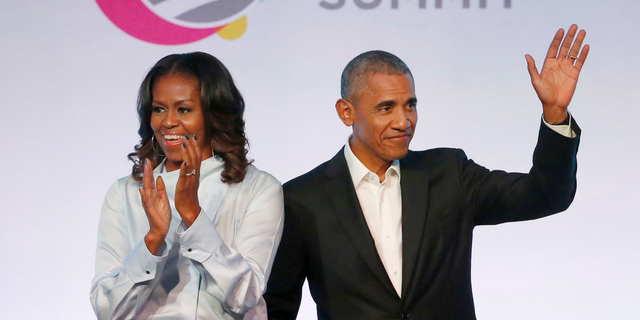 The Obamas have unveiled a slate of projects in development for Netflix, a year after the former president and first lady signed a deal with the streaming platform. The Obamas’ production company, Higher Ground Productions, announced a total of seven films and series that Barack Obama said will entertain but also “educate, connect and inspire us all.”(AP Photo/Charles Rex Arbogast, File)

"When they go low, we go high," before taking a jab at the

former first couple.
CNN HAS BAD WEEK AMID APRIL RYAN, CHRIS CUOMO AND DON LEMON NEWS: ‘IT WAS QUITE EMBARRASSING’
“Going high evidently includes a trademark fight,” Gardner wrote.
The Obamas launched Higher Ground in an effort to produce a diverse mix of content, which includes a scripted series, an unscripted series, a docuseries, as well as documentaries and features, according to a previous press release from Netflix.

'Instead of simply picking another name, the Obamas' lawyers have now filed a meritless petition to cancel my client's trademark'
— Larry Zerner

Higher Ground Productions announced a total of seven projects earlier this year – both films and series – that the former president said would entertain but also "educate, connect and inspire us all."
The Obamas told the U.S. Patent & Trademark Office that their production company wouldn’t be mistaken for an e-book publisher despite the similar name.
"[T]he consumers of 'media production services' covered by the Application are likely to be highly sophisticated," the Obamas' team said in a letter to the Trademark Office, according to THR. "Media production services are generally offered not to individual consumers but to commercial entities and professionals in their field.”
CLICK HERE TO GET THE FOX NEWS APP
The letter continued: “Indeed, Applicant has entered a deal with Netflix in connection with its media production services. Such customers, whether multi-billion-dollar media companies or smaller commercial entities in need of media production services, will exercise the height of care in selecting a media production company and are highly unlikely to be confused by a photographer or e-book publisher — particularly when the other party uses a distinguishable mark."
However, the U.S. Trademark Office deemed the two companies too similar so the petition to cancel was filed.
“In a petition to cancel, the Obamas essentially allege that [Higher Ground Enterprises boss Hanisya] Massey doesn't deserve a trademark because ‘Higher Ground Enterprises’ wasn't actually in use at the time of its 2016 registration,” Gardner wrote. “Her trademark is in Class 41, which includes entertainment services.”
The Obamas' team declined comment when reached by THR and did not immediately respond to a request from Fox News.
Fox News’ Julius Young contributed to this report.
Source>https://www.foxnews.com/entertainment/obamas-trademark-higher-ground
Posted by theodore miraldi at 2:57 PM