Despite coming into office with a budget surplus of around $36 billion and enjoying favorable approval ratings, California Gov. Gavin Newsom’s first year in office has been anything but tranquil.
Newsom, who spent the previous eight years as lieutenant governor to Democrat Jerry Brown, has in the first 10 months of his term had to take the helm in dealing with a slew of pressing issues from a massive homelessness crisis and rising housing costs to sky-high gas prices and decaying roads.
STRENGTHENING WINDS INCREASE SIZE OF MENACING KINCADE FIRE
Now, with the state entering its traditional fire season, Newsom is grappling with massive wildfires everywhere from Los Angeles to the state’s storied wine region, while also fighting to limit blackouts by Pacific Gas & Electric Corp., the state’s largest utility provider -- in what is posing a complex and urgent challenge for his administration.
“The next 72 hours will be challenging,” Newsom said during a press conference over the weekend. “I could sugarcoat it, but I will not.”
GEYSERVILLE, CA - OCT. 25: Gov. Gavin Newsom surveys a home destroyed in the Kincade Fire, Friday, Oct. 25, 2019, in Geyserville, Calif. (Karl Mondon/MediaNews Group/The Mercury News via Getty Images)

On Monday, fire crews across the state were battling a blaze in the star-studded hills around Los Angeles, forcing thousands of people to flee in the middle of the night and destroying several large homes. Up north in the Sonoma wine country, firefighters were trying to get a handle on an almost week-old blaze that doubled in just a day to at least 103 square miles.
Adding to Californians' frustration was PG&E beginning another round of fire-prevention blackouts that are expected to affect nearly 600,000 customers in 29 counties, or about 1.5 million people, and leave them without power for possibly five days or more. PG&E’s move comes as the company admitted that a PG&E transformer malfunction and one of its power poles falling over may have been responsible for two smaller fires that broke out in the San Francisco Bay Area over the weekend.
Click Image For VIDEO

Video
Despite acknowledging that it was in part his own responsibility to make sure blackouts did not happen, Newsom has roundly criticized PG&E and the state’s other utility companies’ failure to modernize electrical systems. He said shutting off power shouldn't have to be the alternative in a state that is so technologically advanced.
MANY HOUSEKEEPERS, GARDENERS WENT TO WORK DESPITE GETTY FIRE EVACUATION ORDER: REPORT
"I have a message for PG&E: Your years and years of greed. Years and years of mismanagement. Years and years of putting shareholders over people. Are OVER," Newsom said Friday on Twitter.

I have a message for PG&E:

Your years and years of greed.

Years and years of mismanagement.

Years and years of putting shareholders over people. 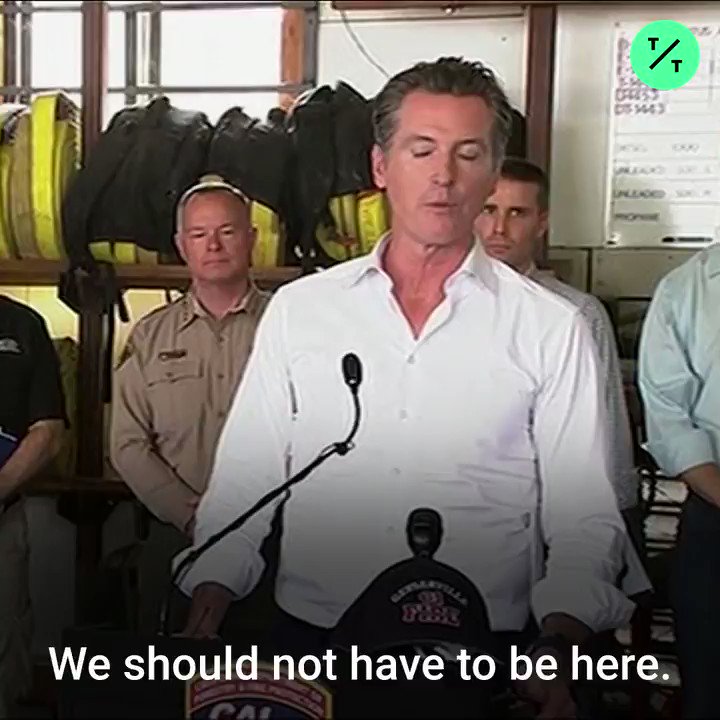 2,857 people are talking about this
California’s Republican lawmakers were quick to point the blame at Newsom and the state’s Democratic supermajority.
“[Gavin Newsom’s] FAILURE: 180,000 evacuated and 1 Million without power due to Democrats' INACTION to clear excess vegetation and secure power lines,” former Republican state assemblyman Travis Allen tweeted. “How much more do Californians have to endure of the California Democrat Party's failure and excuses?”

.@GavinNewsom's FAILURE: 180,000 evacuated and 1 Million without power due to Democrats' INACTION to clear excess vegetation and secure power lines. How much more do Californians have to endure of the California Democrat Party's failure and excuses? https://www.nytimes.com/2019/10/27/us/kincade-fire-california.html …

Driven by dry winds, the Kincade fire north of San Francisco was still growing on Sunday morning, and power was being shut off to much of the Bay Area to prevent more outbreaks.
nytimes.com

485 people are talking about this
Matt Shupe, a Republican political consultant in California, argued that while the governor has done what he can to combat the wildfires, including declaring a state of emergency tapping into state and federal funds, the risk of wildfires could have been decreased if Newsom and state Democrats had taken a different approach with environmental policies.
In their natural state, forests are regularly thinned by fire but the billions of dollars that the state spends fighting wildfires and restrictions on logging have allowed forests to accumulate an overload of vegetation and dead trees.
“Newsom prides himself on being the most environmentally friendly politician,” Shupe told Fox News. “But there needs to be a more pragmatic approach than just leaving these trees to turn into tinder.”
Click Image For VIDEO

Video
Many Californians affected by both the fires and the blackouts, however, are not blaming Newsom, but PG&E – saying the company is more concerned with keeping itself financially above water than with improving the safety of their lines.
PG&E is in bankruptcy after its equipment was blamed for a string of disastrous fires during the past three years. Its stock dropped 24 percent Monday to close at $3.80 and was down more than 50 percent since Thursday.
CLICK HERE FOR THE FOX NEWS APP
"It's so obvious it's just to protect them from more liability," Janet Luoma of Santa Rosa said at a Red Cross evacuation shelter.
Jeff Schlegelmilch, the deputy director of the National Center for Disaster Preparedness, told Fox News that the blame is likely shared by both the state government and the state’s power utilities. He said that these types of wildfires are likely only to increase given the effects of climate change and that instead of shutting off power – which he argues creates its own “pseudo disaster” – the state and power utilities need to think long term about how to deal with the problem.
Click Image For VIDEO

Video
“Proper forest management is obviously key, but there needs to be more spending to update the power infrastructure in the state and make it safer,” Schlegelmilch said.
He added: “The problem here is much bigger than just the response to the fires. These issues need to be addressed when talking about economic development and investment.”
The Associated Press contributed to this report.
Source>https://www.foxnews.com/politics/california-chaos-newsom-grapples-wildfires
Posted by theodore miraldi at 3:02 PM