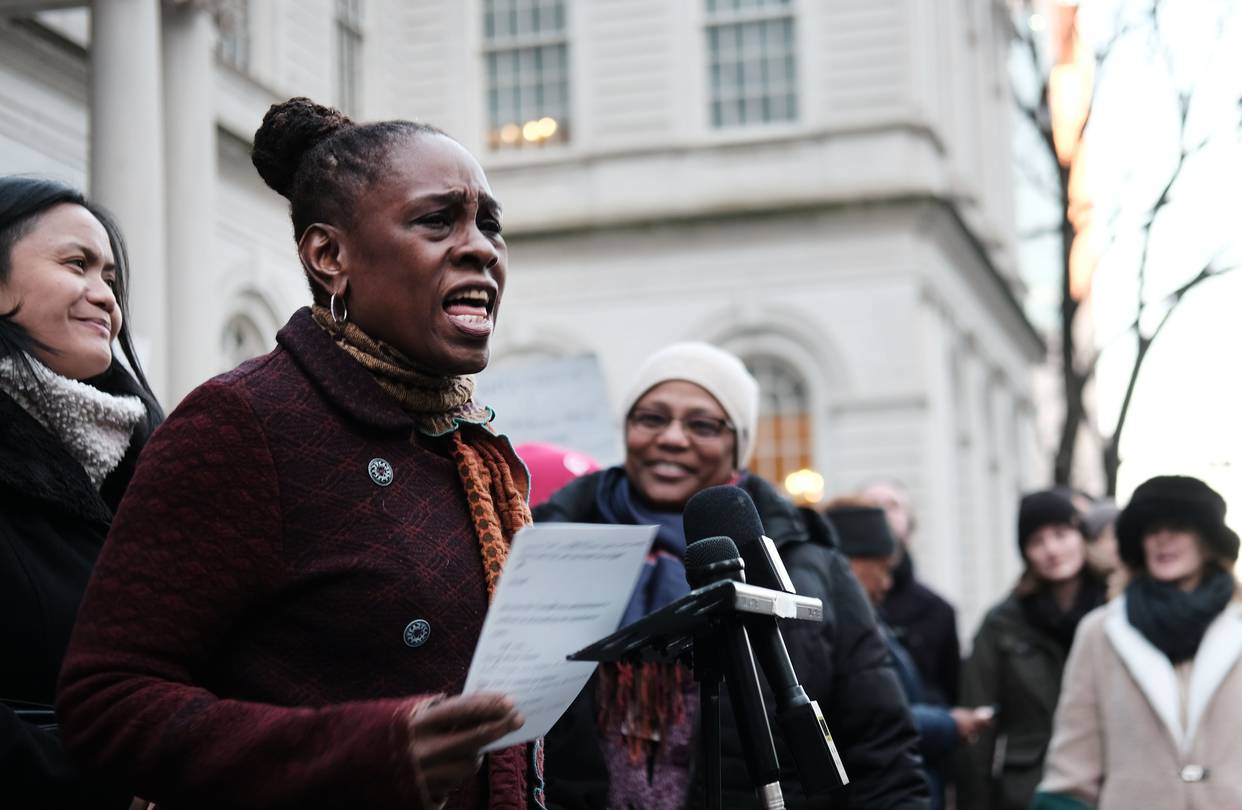 
This is no way to thrive.
When a Baptist church just steps away from where four homeless men were savagely murdered wanted to hold a forum on mental health issues, it asked City Hall for help.
First lady Chirlane McCray’s signature ThriveNYC program seemed the right place to provide mental health assistance for the community, said Keisha Hogans, a member of Mariners Temple Baptist Church and the community activist coordinating the forum.
Hogans found the opposite. “Clueless,” is how she described the reps of the program that has cost taxpayers $850 million so far.
“Well what do you mean? What do you want us to do?” she said Thrive reps told her.
Hogans was stunned.
“Well, you’re Thrive. You’re supposed to have mental health resources,” she fumed. “You should be telling me what I can do.”
Thrive, which began in 2015 to address issues like depression and suicide particularly in low-income and minority communities, was blasted earlier this year for a lack of data to justify its $250 million-a-year cost.
After four sleeping homeless men were bludgeoned to death Oct. 5 and a fifth critically injured, allegedly at the hands of fellow vagrant Randy Santos, city workers showed up in Chinatown with Thrive brochures.
But The Post spotted one employee ignoring a sleeping homeless man while handing out the pamphlets.
Mayor Bill de Blasio has defended ThriveNYC in the wake of the murders.
“The truth is that ThriveNYC is attempting to do what’s never been done before, which is to create pervasive access to mental health services in New York City,” he insisted at a press conference last week.
But on Friday he ordered a 30-day review of the city’s mental health intervention programs.
Hogans was seeking Thrive’s intervention to prevent future tragedies when she reached out to McCray’s program for assistance in early 2018, following several suicides in her Lower East Side housing development.
She said there was a general need to start discussing mental health issues in the community, where the number of homeless people has surged in the last few years.
The Rev. Henrietta Carter, the senior pastor of the church — which provides clothing to the homeless and hosts a food pantry — said assistance from the city would have been valuable.
Hogans exchanged emails in February 2018 with David Rivera, a Thrive outreach coordinator, who said he wanted to “discuss some of the City’s new mental health resources,” according to a copy of the email viewed by The Post.“Help us help them,” Carter said. “What do we need to know? We have to be very careful how we even attempt to serve those who have mental challenges.”
Hogans responded: “We would like to have a forum of health care professionals who deal with mental health issues. I think we would like to know about solutions for our community. What signs to look for regarding mental illness? We would like to address all ages of the community because people from all ages … at some point, may deal with a mental issue and need support.”
She added that she wanted her Chinatown church to be “a beacon of hope to those who suffer in silence and to shed light on an issue that many are afraid to discuss.”
Hogans said she was met with silence.
In May 2018, Hogans appealed to the Center for Faith & Community Partnerships, which is part of the mayor’s office.
“I never heard back from David Rivera. I thought the mayor’s office was serious about mental health,” Hogans wrote.
The response came from Theresa Doherty, a senior program director, who apologized for “inconsistent communications.”
“Please know that we do take our mental health initiatives seriously. In addition to the Thrive team, we at the Center for Faith would be very interested in working with you to ensure that Mariners’ Temple is engaged in mental health programming, as well as in terms of other city initiatives,” Doherty wrote in an email. “Tomorrow, I will personally follow up with the Thrive NYC team to find out what happened with the response for Mariners’ Temple.”
Hogans said she never received a response.
“What is the purpose of Thrive if you’re not going to help people who want to at least talk about mental health?” she asked.
Among the program’s main initiatives are a hotline to refer people for treatment and mental health first aid training, classes given at churches and schools.
Hogans said that perhaps if the church had been able to hold the forum she envisioned, it might have made a difference in preventing Santos, who had a history of violent behavior, from his alleged rampage or helped get some homeless people into shelters.
“It may have helped encourage someone to call the police while he’s hitting someone else,” she said. “I would like to believe it would have changed the effects in the community.”
A Thrive spokesman said Friday that the program would reach out to Hogans “to apologize if we missed her email and see how we can support the kind of event she has in mind.”
Source>https://nypost.com/2019/10/12/chirlane-mccrays-thrivenyc-clueless-in-community-outreach/
Posted by theodore miraldi at 5:36 PM