Dems Storm Out Of SYRIA Meeting With Trump: 'We Have To PRAY For His Health' 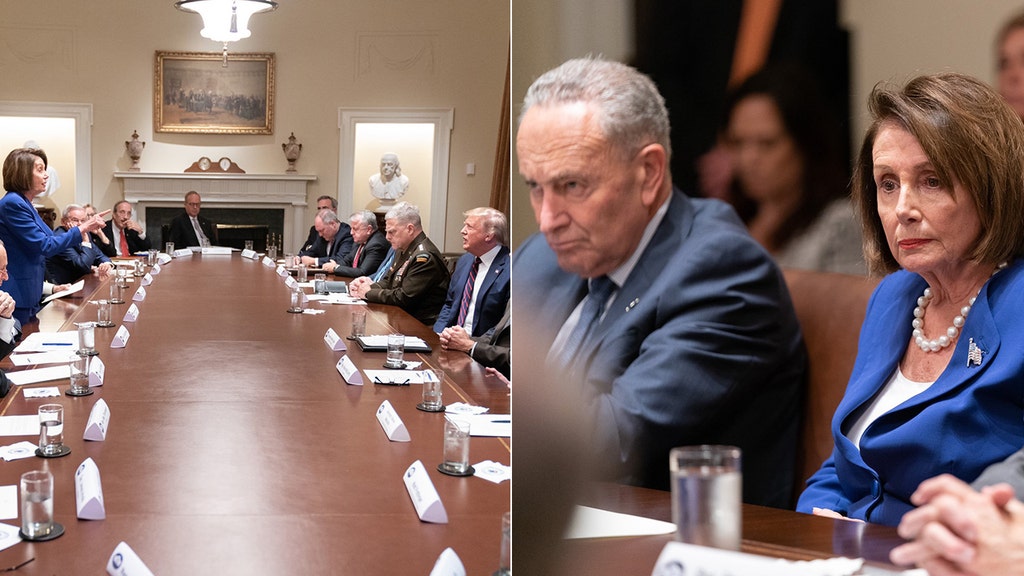 
Senate Minority Leader Chuck Schumer, House Speaker Nancy Pelosi and House Majority Leader Steny Hoyer announced at a news conference outside the White House on Wednesday that they had just walked out of a meeting with President Trump on Syria policy, after he apparently called Pelosi either a "third-rate politician" or "third-grade politician" and angrily suggested the Democrats probably appreciated communist Islamic State terrorists in the Middle East.
"What we witnessed on the part of the president was a meltdown, sad to say," Pelosi, D-Calif., remarked.
She said later, at the Capitol: "I pray for the president all the time, and I tell him that -- I pray for his safety and that of his family. Now, we have to pray for his health -- because this was a very serious meltdown on the part of the president."
A senior Democratic aide told Fox News that Trump began the meeting, which was ostensibly called by the White House, by remarking that "someone wanted this meeting so I agreed to it."  Trump also reportedly told Pelosi, "I hate ISIS more than you do," prompting Pelosi to respond, "You don't know that."
Trump then remarked, according to the senior source: "President Obama drew a red line in the sand [in Syria].  In my opinion, you are a third-grade politician." (Schumer, D-N.Y., told reporters he heard Trump use the term "third-rate politician.")
Pelosi forcefully reminded Trump that the House had recently overwhelmingly voted to condemn his Syria policy, the source said.
The source told Fox News that Trump made a big show of a pointed letter he sent last week to Turkey's president, but that Democrats were unimpressed -- as the letter was sent after Trump effectively green-lit Turkey's invasion of Syria, and apparently had no effect on curbing Turkish aggression.
As the Democrats walked out, Trump reportedly remarked, "I'll see you at the polls."
Another Democratic source familiar with the conversation told Fox News that Schumer started to read the president a quote from former Defense Secretary James Mattis from Sunday: "And, in this case, if we don't keep the pressure on, then ISIS will resurge. It's absolutely a given that they will come back."