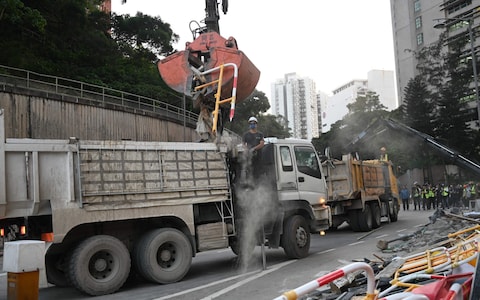 A worker removes debris left by pro-democracy protesters near the Chinese University of Hong Kong (CUHK) on November 16, 2019. CREDIT: AFP

China’s People’s Liberation Army troops appeared on the streets of Hong Kong yesterday as part of a clean-up mission that risked a backlash from pro-democracy protesters who have brought the city to a standstill in recent months.

The appearance of the PLA soldiers outside their barracks - even dressed in shorts and t-shirts - to help clear away barricades and debris from another night of protests could be seen as an incremental raising of the political stakes from Beijing.

Demosistō, a pro-democracy organisation, said the clean-up operation could set a "grave precedent" if the city's government invites the military to deal with internal problems. 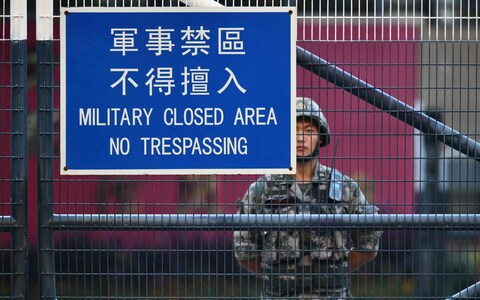 A member of Chinas People's Liberation Army (PLA) stands guard inside Osborn Barracks in Kowloon Tong in Hong Kong on November 16, 2019.
- China's President Xi Jinping warned on November 14 that protests in Hong Kong threaten the "one country, two systems" principle governing the
semi-autonomous city that has tipped into worsening violence with two dead in a week. CREDIT: AFP


Hong Kong’s city government clarified that it did not request assistance from PLA forces which have remained in their barracks during five months of protests, issuing a statement describing the deployment as a “voluntary community activity” by the military.

Foreign envoys and security analysts estimate up to 12,000 troops are now based across Hong Kong - more than double the usual garrison number following an additional deployment last August. Chinese troops have appeared on streets only once since the 1997 handover to help clear up after a typhoon in 2018.

It was not clear how many were involved yesterday, but by late afternoon, the PLA soldiers had left the streets outside Baptist University beside their barracks in Kowloon Tong. 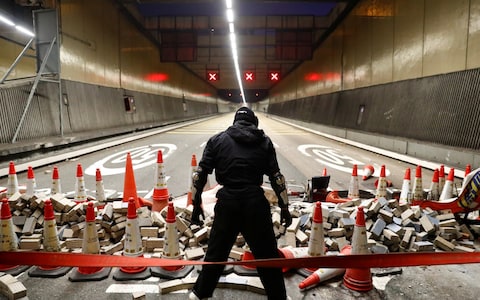 An anti-government protesters stands at a blocked outlet of the Cross Harbour Tunnel near the Polytechnic University in Hong Kong CREDIT: REUTERS


The PLA garrison in Hong Kong said that when some residents began cleaning, some troops "helped clear the road in front of the garrison gate". Clashes between protesters and police have become increasingly violent, with China warning that any attempt at independence for Hong Kong will be crushed.


Chinese state media has repeatedly broadcast comments made on Thursday by President Xi Jinping, in which he denounced the unrest and said “stopping violence and controlling chaos while restoring order is currently Hong Kong's most urgent task”.

The clean-up followed some of the worst violence seen this year, after a police operation against protesters at the Chinese University of Hong Kong on Tuesday.

The authorities have since largely stayed away from at least five university campuses that had been barricaded by thousands of students and activists who stockpiled petrol bombs, catapults, bows and arrows and other weapons.

Posted by theodore miraldi at 2:27 PM