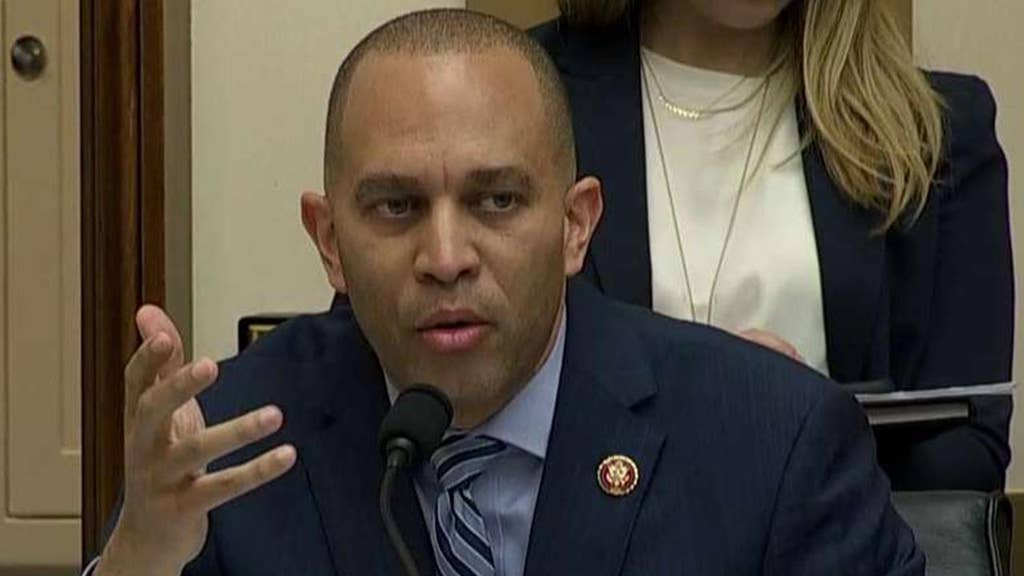 House Democratic Caucus Chairman Rep. Hakeem Jeffries blasted Republicans and labeled them as a "#CoverUpCaucus" after they submitted a list of witnesses they would like to call for public testimony as part of the ongoing impeachment inquiry of President Trump.
Jeffries, D-N.Y., also questioned the validity of the witnesses in a brief but fiery tweet Sunday morning directed at his counterparts across the aisle.
TRUMP WANTS PELOSI, BIDEN TO BE CALLED AS IMPEACHMENT INQUIRY WITNESSES, SAYS HE'LL RELEASE SECOND PHONE CALL TRANSCRIPT
"House Republican #CoverUpCaucus wants sham witnesses to testify," Jeffries said. "My two cents? GET LOST."

1,173 people are talking about this
The GOP list includes Hunter Biden and his former business partner Devon Archer, former Democratic National Committee consultant Alexandra Chalupa, and the anonymous whistleblower whose complaint about Trump's July 25 phone call with Ukrainian President Volodymyr Zelensky led to the impeachment inquiry.
In that call, Trump urged Zelensky to launch an investigation into the Biden family’s dealings in Ukraine -- specifically, why former Vice President Joe Biden pressured former Ukrainian President Petro Poroshenko to fire a prosecutor who was investigating a Ukrainian energy firm where his son Hunter held a lucrative role on the board.
Democrats have claimed the call was part of an attempted quid pro quo in exchange for withheld U.S. military aid and a White House meeting between Zelensky and Trump. Trump has denied the claim, saying the call was “perfect.”
Republicans have called for the whistleblower to come forward to answer questions about their complaint, which came from second-hand knowledge of the phone call.
House Intelligence Committee Chairman Rep. Adam Schiff, D-Calif., who runs the inquiry, was quick to reject the GOP's request to have the whistleblower come forward to testify, citing whistleblower protection laws and stating that other witnesses' testimony has already been more substantive than what was stated in the complaint.
"The committee ... will not facilitate efforts by President Trump and his allies in Congress to threaten, intimidate and retaliate against the whistleblower who courageously raised the initial alarm," Schiff said in a letter to Intelligence Committee Ranking Member Devin Nunes, R-Calif. " ... The whistleblower has a right under laws championed by this committee to remain anonymous and to be protected from harm."
The impeachment inquiry, moreover, has gathered an ever-growing body of evidence -- from witnesses and documents, including the president's own words in his July 25 call record -- that not only confirms, but far exceeds the initial information in the whistleblower's complaint ... " Schiff concluded his letter.
President Trump suggested Saturday that Republicans call former Vice President Joe Biden, House Speaker Nancy Pelosi, and Schiff himself as witnesses.

40.2K people are talking about this


Fox News' Brooke Singman and Adam Shaw contributed to this report.
Source>https://www.foxnews.com/politics/dem-leader-sounds-off-on-gop-impeachment-inquiry-witness-list-get-lost
Posted by theodore miraldi at 11:25 AM