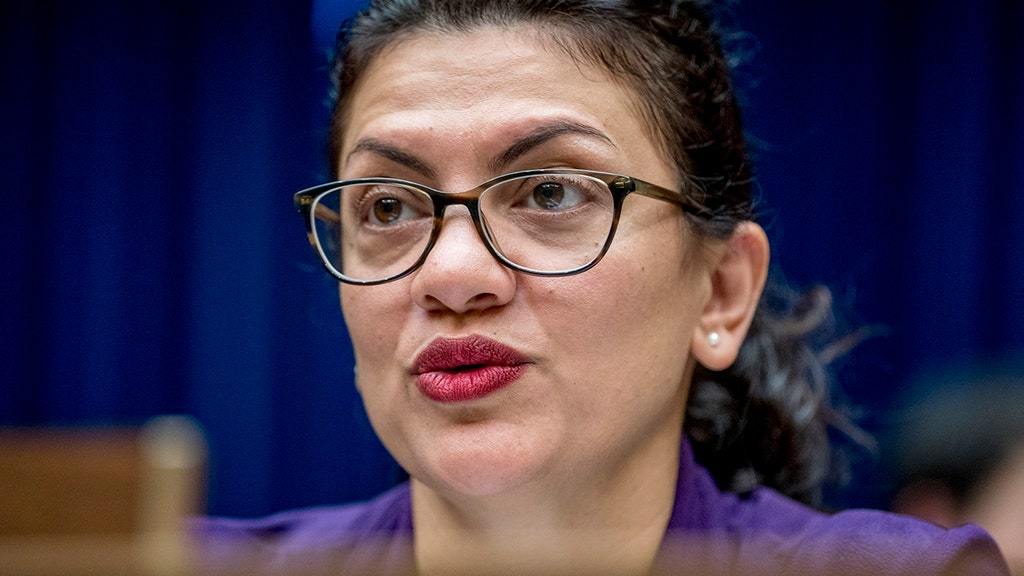 
The House Ethics Committee on Thursday released a trove of striking internal campaign communications sent in 2018 by Michigan Democratic Rep. Rashida Tlaib, in which Tlaib urgently requested money from her congressional campaign to defray personal expenses -- and, a government watchdog said, possibly violated federal law in the process.
The document dump was related to the committee's ongoing ethics probe into Tlaib, which the panel said on Thursday would be "expanded" based on a referral from the Office of Congressional Ethics (OCE). Additionally, the Ethics Committee acknowledged for the first time on Thursday an investigation into Florida Democratic Rep. Alcee Hastings concerning a "personal relationship with an individual employed in his congressional office."
Texts and emails released by the Ethics Committee show Tlaib frantically contacting members of her staff for financial help.
In one April 2018 email offered as an exhibit by OCE, Tlaib wrote that she was "struggling financially right now" and was "sinking." She continued: "So I was thinking the campaign could loan me money, but Ryan said that the committee could actually pay me. I was thinking a one time payment of $5k."
In another email, on April 4, 2018, Tlaib wrote: "I am just not going to make it through the campaign without a stipend."
"With the loss of a second income to lean back on," she wrote. "I am requesting $2,000 per two weeks but not exceeding $12,000. The cost of living stipend is going towards much needed expenses due to campaigning that includes car maintenance, child care and other necessities. Please let me know if I can proceed."
READ THE OCE'S REFERRAL STATEMENT ON TLAIB
In August of that year, Tlaib texted her future chief of staff Ryan Anderson at 6:38 a.m.: "Sorry for the early text but do you think the campaign can still pay me a stipend until the general. Trying to get out of debt."
"I think we definitely afford to do so. But we need to really clearly define your time and space," Anderson responded, noting that the arrangement could arouse "concern" among the media.
The OCE also attached scans of checks made out to Tlaib from her campaign, totaling thousands of dollars.
Rep. Rashida Tlaib, D-Mich., once vowed to impeach 'the motherf---er' -- and now is the subject of an Ethics Committee probe. (AP Photo/Andrew Harnik)
Talib's lawyers said in August there was no evidence that she violated the law on purpose or otherwise, and insisted there were no bad intentions. They noted that Federal Election Commission (FEC) regulations permit campaigns to "pay limited salary to candidates who curtail outside employment to focus on their campaigns" in certain limited conditions that, the lawyers said, were met in this instance.
The attorneys went on to say it was "most irregular" for OCE to call for a probe into a member of Congress based on pre-election activities, and argued that there was no "conscious disregard of any law or regulation." Tlaib was paid by her campaign after Election Day, the attorneys conceded, but they asserted that the money was for services performed before Election Day.
But Tlaib's campaign committee, Rashida Tlaib for Congress, allegedly "reported campaign disbursements that may not be legitimate and verifiable campaign expenditures attributable to bona fide campaign or political purposes," according to a release from OCE that unanimously recommended the Ethics Committee investigate Tlaib.
READ THE OCE'S EXHIBITS OUTLINING TLAIB'S POSSIBLE MISCONDUCT
If Tlaib "converted campaign funds from Rashida Tlaib for Congress to personal use, or if Tlaib’s campaign committee expended funds that were not attributable to bona fide campaign or political purposes, then Tlaib may have violated House rules, standards of conduct, and federal law," the OCE continued.
"The Board recommends that the Committee further review the above allegation concerning Rep. Tlaib because there is substantial reason to believe that Rep. Tlaib converted campaign funds from Rashida Tlaib for Congress to personal use or Rep. Tlaib’s campaign committee expended funds that were not attributable to bona fide campaign or political purposes," it said.
The Ethics Committee first announced on August 16, 2019 that it had received a referral from the concerning Tlaib.

"So I was thinking the campaign could loan me money ..."
— Michigan Democratic Rep. Rashida Tlaib, in 2018 email released by OCE

Meanwhile, the Ethics Committee also said it was looking into an alleged relationship between Hastings and a staffer, and whether Hastings "has received any improper gifts, including any forbearance, from that employee."
Rep. Alcee Hastings, D-Fla. (AP Photo/Manuel Balce Ceneta)
"The Committee is specifically considering whether Representative Hastings’ relationship with the individual employed in his congressional office is in violation of House Rule XXIII, clause 18(a)," the ethics panel said. That provision refers to improper sexual relationships with "any employee of the House who works under the supervision of the Member, Delegate, or Resident Commissioner, or who is an employee of a committee on which the Member, Delegate, or Resident Commissioner serves."
READ THE RESPONSE FROM TLAIB'S LAWYERS
"The Committee continues to gather additional information regarding the allegations," the panel noted.
The announcement from the ethics panel came less than a month after California Democratic Rep. Katie Hill resigned amid allegations that she had improper personal relationships with her own staffers.
“I have cooperated with the Committee since May 14, 2019," Hastings said in a statement. "As they continue to conduct their work, I stand ready to fully cooperate with their inquiry."
Tlaib and Hastings have both vocally supported impeaching and removing President Trump from office, saying he is unfit to serve. Earlier this year, Tlaib boasted that Democrats would "impeach the motherf---er," referring to the president.
CLICK HERE TO GET THE FOX NEWS APP
And, in a striking scene at the outset of a Rules Committee meeting last month, Hastings -- who himself was impeached and removed from the federal bench in 1989 for taking bribes -- outlined the alleged "high crimes and misdemeanors" that he said Trump had committed.
Fox News' Chad Pergram contributed to this report.
Source>https://www.foxnews.com/politics/house-ethics-committee-announces-probe-into-dem-reps-tlaib-hastings
Posted by theodore miraldi at 7:56 PM