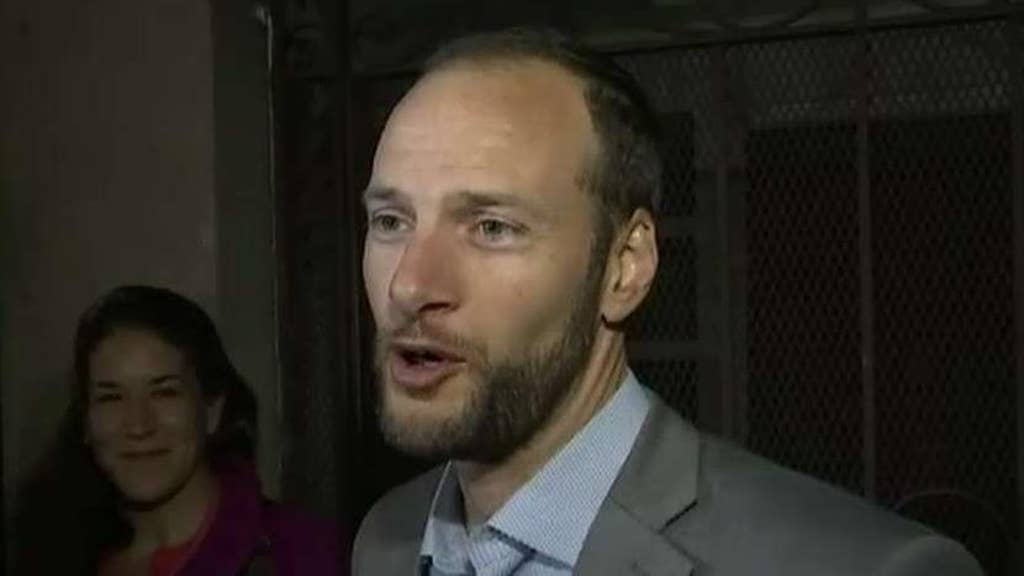 
Newly elected San Francisco District Attorney Chesa Boudin grabbed headlines earlier this week after saying he would not prosecute “quality-of-life” crimes including public urination -- but that’s only part of what’s on the agenda for the 39-year-old former public defender with a past that's radical even by California standards.
Boudin was raised by Bill Ayers and Bernardine Dohrn, notorious former leaders of the Weather Underground domestic terror group, and formerly worked for the late socialist president of Venezuela, Hugo Chavez.
His campaign was fiercely opposed by the local police union, which reportedly spent more than $650,000 to counter his candidacy. Law enforcement officials have warned about the message being sent by his platform as the new top prosecutor rails against the criminal justice system he's been elected to lead.
“The criminal justice system isn’t just massive and brutal, it’s also racist,” Boudin says on his campaign website. “It’s a shocking set of statistics, building on centuries of systemic racism beginning with slavery and moving through Jim Crow, housing policy, and the Drug War.”
SAN FRANCISCO'S NEW DA PLEDGES NOT TO PROSECUTE PUBLIC URINATION, OTHER QUALITY-OF-LIFE CRIMES
Boudin won a close vote last week after days of counting, defeating interim DA Suzy Loftus in a campaign that was backed by high-profile progressives across the country. Democratic presidential candidate Bernie Sanders; Cook County, Ill., State’s Attorney Kim Foxx – who drew controversy for dropping charges of faking a hate crime against actor Jussie Smollett – Philadelphia District Attorney Larry Krasner; and Black Lives Matter activist Shaun King are among his supporters.
Neither Boudin nor King's Real Justice PAC, which endorsed Boudin, responded to requests for comment for this report.
"By fighting tirelessly for a more just criminal justice system, Chesa has earned the trust of his clients, his community, and his colleagues," King says in a statement on the Real Justice PAC website. "Chesa is the right candidate at the right moment to transform the justice system in San Francisco, and make the city safer and more just for everyone who lives and works there."
However, Boudin's policies have concerned members of his community, which is facing a growing homelessness crisis. His platform includes allowing "immigration-safe" plea deals to prevent the deportation of illegal immigrants, requiring prosecutors to write a "racial impact statement" in each case they pursue and ending policies that increase the sentences for crimes committed by gang members.
"For him to just blanketly say he's not going to hold people accountable for their actions, it goes against the basic tenet[s] of a strong society -- and that's be kind to each other and be accountable for your actions," San Francisco Police Officer's Association President Tony Montoya told Fox News.
Click Photo For VIDEO

Video
"To just take on the approach that you're not going to even acknowledge it, as if the problem doesn't exist, is not a solution. It's just further making the problem worse as people sit there and suffer on our streets, [and] the residents and visitors suffer too by having to live in these types of situations."

"I took to signing my e-mails to friends and family ‘in the belly of the revolution.'"
— Chesa Boudin, "Gringo: A Coming of Age in Latin America"

But Boudin's past has gotten as much attention as his present-day policies. His biological parents, David Gilbert and Kathy Boudin, were also long-time Weather Underground members.
In 1981, when Boudin was 1, his parents were getaway drivers for a group of radical black nationalists as they robbed a Brinks truck of $1.6 million. Two police officers and one guard were killed when they tried to stop the getaway. Kathy Boudin pleaded guilty to one count of felony murder and robbery and was sentenced to 20-years-to-life. She was paroled in 2003. Gilbert was convicted of three counts of felony murder and one count of robbery and sentenced to 75 years to life in prison. He will be eligible for parole in 2056.
Dohrn and Ayers, who were friends with Boudin’s parents, took young Chesa in and raised him – an upbringing Boudin credits with forming his worldview. Ayers, whose association with Barack Obama came under scrutiny during the 2008 presidential campaign, told Fox News in 2014 that the Weather Underground took credit for more than 20 bombings while they were active.
“My family taught me radical politics from the beginning, but I also learned to prove myself in elite institutions,” Boudin wrote in his 2009 book, “Gringo: A Coming of Age in Latin America.” “Brought up with the privileges and opportunities the United States offers some people, and a political line that condemned the very existence of an elite, I lived a contradiction.”
Chesa Boudin pauses during his speech at an election night event last week. (Scott Strazzante/San Francisco Chronicle via AP)
SUPPORTERS OF SAN FRANCISCO'S NEWLY-ELECTED DA CHANT INSULTS AT POLICE UNION
Boudin went on to earn a bachelor’s degree and a law degree from Yale and attended Oxford University on a Rhodes Scholarship. But in 2004, he went to Venezuela where he found work as a translator working for a “radical theorist” and adviser to Chavez, Marta Harnecker.
Working in Miraflores, Venezuela’s presidential palace, Boudin “found inspiration in the commitment and the values of the people around me. And so I stayed,” he wrote in his book.
“From my computer in Marta’s office I took to signing my e-mails to friends and family ‘in the belly of the revolution.’”
Boudin worked for the Chavez government for nearly a year, moving to the office of Presidential International Relations and even translating for Dohrn and Ayers on a tour they took around Venezuela before returning back to England to continue his work at Oxford.
SAN FRANCISCO'S NEW DA & HIS RADICAL AGENDA
“I had found one of the few places on the planet where having parents in prison in the United States for politically motivated crimes actually opened doors rather than closed them,” he wrote of his time in the socialist country.
He later used his political connections in the Venezuelan government to work as a fixer for a group of foreign journalists who covered the 2006 Venezuelan presidential election between Chavez and Manuel Rosales. After Chavez had secured a landslide victory, Boudin and two friends he was staying with joined revelers in front of Miraflores.
"Fighting off sleep, Pablo, Liza, and I donned our pro-Chavez red paraphernalia and raced out to join the inevitable celebrations … Twenty minutes later we joined the thousands who were charging up the hill toward the palace in the pouring rain," he wrote.
"In Venezuela, voting and political engagement is not a chore, but a national fiesta."
Boudin returned to Venezuela again in 2007, according to his book, as the nation was voting on a package of constitutional changes that would have concentrated power in Chavez's hands and allowed him to remain president indefinitely. By this time, poverty under the country's socialist government had led to shortages and Boudin wrote that he couldn't find milk or sugar at the grocery store -- an ominous preview of the chaos that has engulfed the country in recent years.

"I had found one of the few places on the planet where having parents in prison in the United States for politically motivated crimes actually opened doors rather than closed them."
— Chesa Boudin, "Gringo: A Coming of Age in Latin America"

While he expressed some trepidation, Boudin was still largely supportive of Chavez.
"It was hard to overlook Chavez’s efforts to entrench his own hold on power," he wrote. "I still believed Chavez’s primary motivation was a desire to help the poor majority with his own power simply because he was the only politician capable of leading the coalition government at the moment."
He continued: "Despite a variety of contradictions and causes for concern, Venezuela's political experiment is still a democratic and courageous effort to invent an alternative model, based on the insistence that another way, another world, is possible."
The constitutional reforms failed due to a low turnout among Chavistas, but a 2009 referendum eventually removed the country's term limits and Chavez held on to power in Venezuela until his death in 2013.
By that time, Boudin was back in the U.S., clerking for a district court judge, after having clerked for U.S. Circuit Judge Mary Margaret McKeown on the Ninth Circuit Court of Appeals. But, he wrote, his time in Venezuela and around South America stuck with him.
"I was born into a North American family with anti-imperialist politics at the dinner table and in their blood," Boudin says, "but many of my conscious formative personal experiences took place in Latin America."
Fox News' Julia Musto contributed to this report.
Source>https://www.foxnews.com/politics/new-san-francisco-da-ayers-chavez
Posted by theodore miraldi at 5:15 PM