Dershowitz: Some Democrats Channeling SOVIET Minister's 'Show Me The Man, I'll Show You The Crime' Maxim 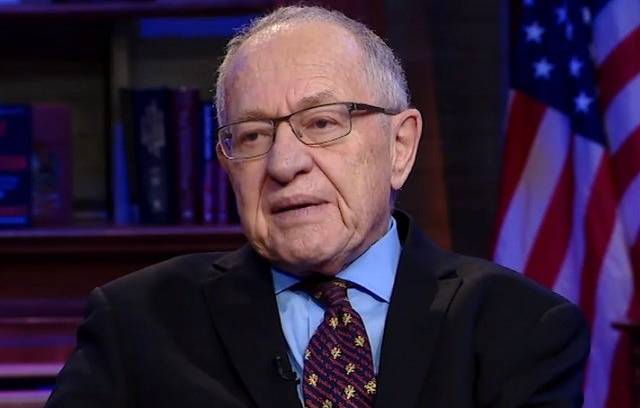 
Some Democrats pursuing the impeachment of President Trump are trying their hardest to pin an impeachable crime on the commander in chief, according to law professor Alan Dershowitz.
In an interview airing Sunday at 8 p.m. ET, Dershowitz tells Mark Levin on "Life, Liberty & Levin" that Trump's phone call with Ukraine does not rise to the level of bribery as defined in common law.
"[I]t can't operate when you're the president of the United States and you're conditioning or withholding money in order to make sure that a country isn't corrupt and you're asking them to investigate [something]," he said.
"That just doesn't fit any definition of bribery -- common law definition of bribery, statutory definition of bribery -- however you define the constitutional word 'bribery.' It just doesn't fit," he said.
MARK LEVIN: EX-DNC CONSULTANT CHALUPA SHOULD HAVE BEEN CALLED AT IMPEACHMENT HEARINGS
Click On Photo To VIDEO

Video
Dershowitz claimed some Democrats appear to be trying to find a crime to accuse Trump of, rather than going through the impeachment process after evidence of a specific high crime has been established.
He recalled the mantra of a former Soviet Union official who would customarily dismiss any presumption of innocence against the accused.
"What they're trying to do is what the KGB under Lavrentiy Beria said to Stalin, the dictator -- I'm not comparing our country to the Soviet Union -- I just want to make sure it never becomes anything like that," he said.
Beria, once the Soviet deputy premier and interior minister, famously would reassure Stalin, "Show me the man and I'll find you the crime."
"And that's what some of the Democrats are doing," Dershowitz claimed. "They have Trump in their sights. They want to figure out a way of impeaching him and they're searching for a crime."
Dershowitz said Democrats settled on the charge of bribery after previous allegations either did not stick or rise to the level of an impeachable offense.
"First, they came up with abuse of power -- not a crime -- it's not in the Constitution. So now they're saying 'bribery,' but they're making it up," he said. "There is no case for bribery based on, even if all the allegations against the president were to be proved, which they haven't been."
Dershowitz said that former Treasury Secretary Alexander Hamilton also famously warned against impeaching a president for partisan ends.
"Alexander Hamilton said in Federalist Paper Number 65: The greatest danger would be if impeachment turned on the number of people each party had," he said.
Impeaching Trump, Dershowitz said, would be a "complete abuse" of the Founding Fathers' intentions.
For that reason, Dershowitz said he opposed former President Bill Clinton's impeachment just as he does that of Trump. Clinton's affair with intern Monica Lewinsky and the ensuing perjury charge did not amount to a "high crime," the professor claimed.
"What Bill Clinton committed was a low crime, a crime to protect his personal life," he said, adding that, at the time, Rep. Jerrold Nadler, D-N.Y. -- who is helping lead the Trump impeachment proceedings -- made the exact case in defense of the 42nd president.
Source>https://www.foxnews.com/media/alan-dershowitz-some-democrats-channeling-soviet-ministers-show-me-the-man-ill-show-you-the-crime-maxim
Posted by theodore miraldi at 11:46 AM