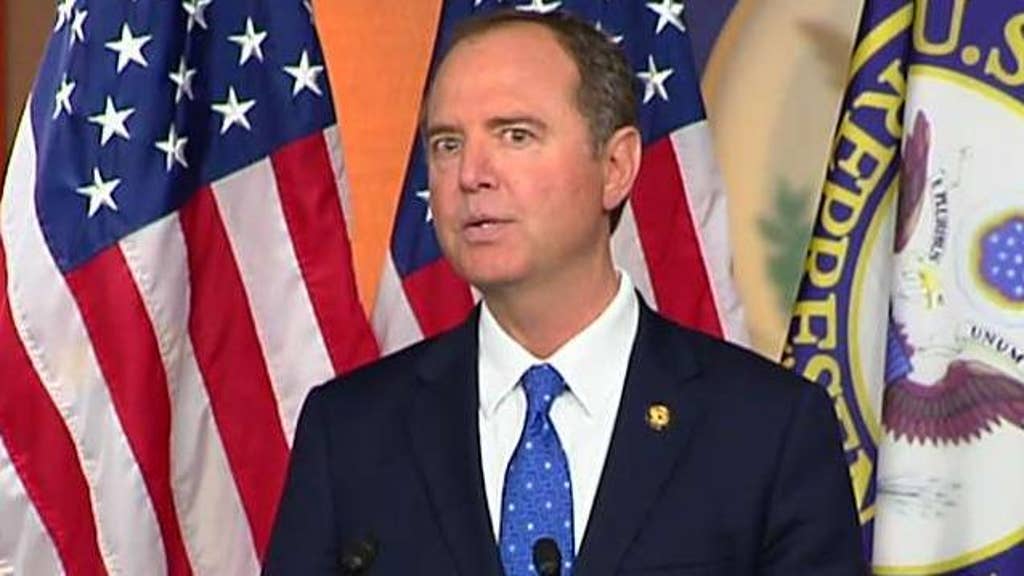 
Sometimes the hypocrisy in Washington is so bad it is almost laughable. The House impeachment witch hunt reached that level this week with the revelations that Intelligence Committee Chairman Adam Schiff, D-Calif., had acquired and published personal phone records of Rep. Devin Nunes, R-Calif., (the ranking member on the Intelligence Committee), two of President Trump’s personal attorneys, and an investigative journalist Schiff doesn’t like.
This act was brazen and shameful. While it may not have been illegal (because Congress writes its own rules on investigations) it certainly was wrong. It certainly tramples on rights normally held dear by the left.
But most of all what it did was expose that Schiff, for all of his pompous bluster, is doing exactly what he has accused President Trump of doing: using his power to investigate his political opponents.
NUNES RIPS SCHIFF OVER SUBPOENA OF PHONE RECORDS: 'I ACTUALLY HAVE SOME CIVIL RIGHTS HERE, TOO'
Instead of another panel of witnesses, we should get Schiff a mirror.
I shouldn’t be shocked by this. This has been a partisan exercise from Day 1. Want proof? There were articles of impeachment filed against President Trump in January 2017, right after his inauguration.
Want more proof? The votes in these impeachment “proceedings” have been completely partisan, every time.
It used to be that Democrats and their co-conspirators in the media didn’t believe in partisan impeachment.
Current House leaders have quotes from the 1990s saying as much – like current House Speaker Nancy Pelosi, D-Calif., and Judiciary Committee Chairman Jerrold Nadler, D-N.Y. But apparently that was just their standard for Republicans, not for themselves.
Partisanship is bad enough. But trampling rights and norms of conduct in investigations is worse, and that’s why Schiff should be formally censured by the House for his actions.
Part of the problem lies with Congress writing its own rules for subpoenas and investigations, without any thought of due process.
For example, when someone attempts to get an attorney’s records in a judicial proceeding, he or she has to show why and must prove it to a court, and then a special judge is appointed to assist with the review. Care is taken. Attorney-client privilege is assumed unless there is evidence of a crime by the attorney. That didn’t happen here because Congress and Schiff don’t think they need to follow this standard.
Part of the problem also lies with our “third-party doctrine” in privacy law, something I’ve been fighting for years. It goes like this: your records are not necessarily your records if they are held by a third party – like a phone company, an Internet service provider, a credit card company, or a physician.
Ask yourself this: When you make a call, send an email, fill your prescriptions, or otherwise live your life, do you think your records are yours, or are they public? Because of some awful and ancient court decisions that predate the digital age, the law currently deems them to not belong to you.
As a result, someone like Schiff can just go to the phone company and you will never know it, even if you are a fellow member of Congress or the president’s lawyer.
That’s wrong. It’s been wrong to do to ordinary citizens. It’s wrong to give Congress this power with no check. And it’s wrong to do this to the president of the United States.
House Democrats are shameless. But with these violations of rights, they’ve reached new lows in an already low process.
It’s time to stop Adam Schiff. It’s time to move on from this witch hunt. And then it’s time to fix the rules and laws that govern our privacy so Americans can feel safe in knowing their information and rights are being protected.
Source>https://www.foxnews.com/opinion/sen-rand-paul-schiffs-release-of-phone-records-is-absolutely-outrageous-heres-what-has-to-happen-next
Posted by theodore miraldi at 5:29 PM