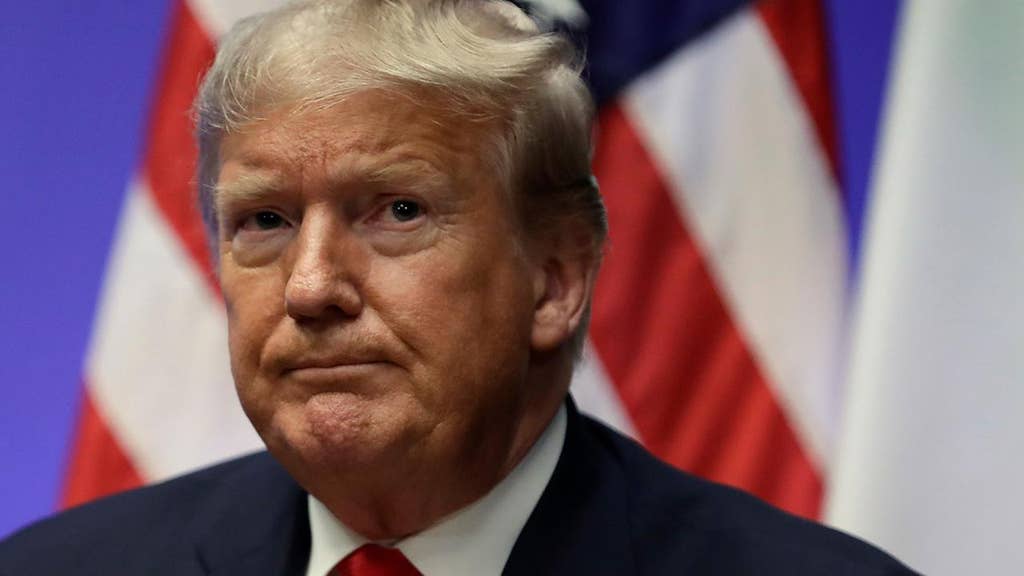 
The White House said Friday it will not participate in House Judiciary Committee impeachment proceedings, blasting the inquiry as "completely baseless" in a curt response to Democrats ahead of Monday's scheduled hearing.
“House Democrats have wasted enough of America’s time with this charade," White House counsel Pat Cipollone said in a scathing one-page letter to Judiciary Committee Chairman Jerrold Nadler, D-N.Y., obtained by Fox News. "You should end this inquiry now and not waste even more time with additional hearings."
PELOSI CALLS FOR ARTICLES OF IMPEACHMENT AGAINST TRUMP: 'NO CHOICE BUT TO ACT'
Friday was the deadline for Trump to respond to Nadler's request for participation in committee proceedings.
But instead of giving House Democrats a direct "no" answer, Cipollone penned a two-paragraph letter derailing the entire process.
"As you know, your impeachment inquiry is completely baseless and has violated basic principles of due process and fundamental fairness," he wrote. "Nevertheless, the Speaker of the House yesterday ordered House Democrats to proceed with articles of impeachment before your Committee has heard a single shred of evidence.”
A senior administration official, though, made it clear they won't be participating, telling Fox News: "We don’t see any reason to participate because the process is unfair. Speaker (Nancy) Pelosi has already announced the predetermined result. They will not give us the ability to call any witnesses.”
Letter to Nadler by Fox News on Scribd
Nadler is set to continue hearings in the committee on Monday.
The decision by the administration likely accelerates the pace of impeachment.
In 1998, the Clinton Administration took 30 hours to present its side of things to the Judiciary Committee. That means there may not be another hearing after Monday’s session.
Trump telegraphed Thursday he wanted to sidestep the House impeachment process and move quickly to the Senate where he believes he'll be acquitted by the GOP-led upper chamber.
“Therefore I say, if you are going to impeach me, do it now, fast, so we can have a fair trial in the Senate and so that our Country can get back to business,” Trump tweeted. “We will have Schiff, the Bidens, Pelosi and many more testify, and will reveal, for the first time, how corrupt our system really is.”
Cipollone repeated Trump's comments in the letter and said the House Democrats would be making a historically unjust mistake by plowing forward.
"Adopting articles of impeachment would be a reckless abuse of power by House Democrats, and would constitute the most injust, highly partisan and unconstitutional attempt at impeachment in our Nation’s history," he said.
Trump and his allies in Congress have dismissed the impeachment as a “sham” partisan exercise aimed at undoing the results of the 2016 presidential election. Trump says his July 25 phone call with Ukrainian President Volodymyr Zelensky was “perfect” when he asked the newly elected foreign leader to investigate the Bidens and the Democratic National Committee server.
Pelosi, however, said the facts of Trump’s wrongdoing involving Ukraine are “uncontested” and announced Thursday Democrats are plowing forward with drafting articles of impeachment against Trump.
“The president abused his power for his own personal political benefit at the expense of our national security,” Pelosi said.
WHITE HOUSE, IN FIERY LETTER, DECLARES TRUMP WON’T PARTICIPATE IN HOUSE JUDICIARY IMPEACHMENT HEARING
Trump declined to have his lawyers participate in the House Judiciary Committee’s first impeachment hearing Wednesday when four legal scholars debated whether Trump’s conduct was impeachable.
Cipollone blasted the “baseless and highly partisan inquiry” in a letter Sunday declining to attend. The White House also accused the Judiciary Committee of “purposely” scheduling its first impeachment hearing when Trump would be meeting with NATO leaders in London and couldn’t attend.
At Wednesday’s hearing, the three lawyers the Democrats invited made the case that Trump’s efforts to pressure Ukraine for personal political purposes and his stonewalling of Congress are impeachable. The lone GOP witness, George Washington University Law Professor Jonathan Turley, said Trump’s call was “anything but perfect” but said Democrats haven’t made the case.
“One can oppose President Trump’s policies or actions but still conclude that the current legal case for impeachment is not just woefully inadequate, but in some respects, dangerous, as the basis for the impeachment of an American president,” Turley said.
Nadler, D-NY,  had set a deadline of 5 p.m Friday in a letter he penned to the president a week ago.
“I am writing to determine if your counsel will seek to exercise the specific privileges set forth in the Judiciary Committee’s Impeachment Procedures … and participate in the upcoming impeachment proceedings,” Nadler wrote in the Nov. 29 letter.
Nadler scheduled the next impeachment hearing for 9 a.m. on Monday, where lawyers for Democrats and Republicans on the House Intelligence Committee will present their evidence.
Fox News’ Chad Pergram contributed to this report.
Source>https://www.foxnews.com/politics/trump-responds-to-impeachment-deadline-i
Posted by theodore miraldi at 6:10 PM