WHO Is Going After American Jews?


I've been offline most of today (Sunday), and … that was a smart move. Going onto Twitter and seeing some left-wingers blaming Donald Trump for the anti-Semitic violence in the New York area is infuriating. Look what Seth Mandel found: 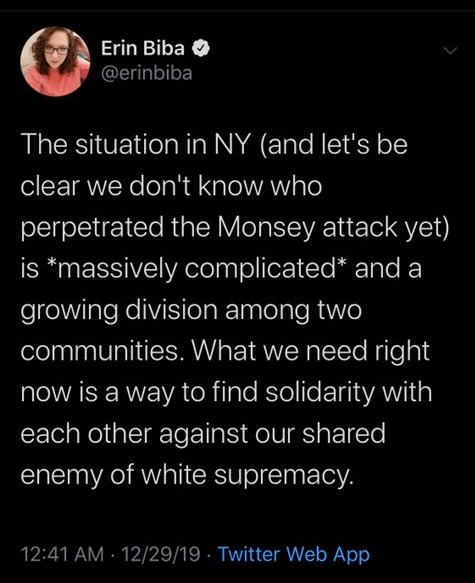 242 people are talking about this
A scan of Twitter — I don’t recommend doing this — finds a shocking number of tweets by people, including left-wing Jews — blaming Donald Trump and white supremacy for the latest spate of anti-Semitic attacks in the US, which have been centered around New York, and focused particularly on Orthodox Jews, who are the most identifiable as Jews because of their distinct mode of dress. Batya Ungar-Sargon, the opinion editor of the Jewish newspaper The Forward, is fed up with this kind of thing. After citing numerous examples of the anti-Semitic assaults over the last two years, she writes:

Almost as horrifying as the attacks themselves is the seeming inability of those whose job it is to protect the vulnerable to figure out what is causing them, or how to stop it from happening over and over.
After the massacre at a Pittsburgh synagogue on Shabbat that killed 11 people last year, and another fatal shooting at a shul in Poway, California six months later, one often heard that the great threat to Jews – even the only threat – comes from white supremacy. Conventional wisdom said it was the political right, and the right’s avatar in the White House, that was to blame for the rising levels of hate against Jews.
But the majority of the perpetrators of the Brooklyn attacks, and the suspects in Jersey City — who were killed in a shootout with the police — and now Monsey, were not white, leaving many at a loss about how to explain it or even talk about it. There is little evidence that these attacks are ideologically motivated, at least in terms of the ideologies of hate we are most familiar with.
And therein lies the trouble with talking about the violent attacks against Orthodox Jews: At a time when ideology seems to rein supreme in the chattering and political classes, the return of pogroms to Jewish life on American soil transcends ideology. In the fight against anti-Semitism, you don’t get to easily blame your traditional enemies — which, in the age of Trump, is a non-starter for most people.
Of course, the rise in anti-Semitism is not incidental to the times we live in. While the Brooklyn attackers are, at least according to demographic trends, extremely unlikely to be Trump supporters, our president, who has a penchant for anti-Semitic tropes, is a conspiracy theorist, and anti-Semitism often manifests as a conspiracy theory about secretive Jewish power.

You can see here that she dances around the unspeakable truth. Interestingly, back in January, she wrote a column criticizing Jews for being too hard on black leaders over anti-Semitism.
Seth J. Frantzman, writing in the Jerusalem Post, is more blunt. Excerpts:

Hatred of Jews spans the white supremacist far right and the black supremacist far right and milieus in between. The difference is that society condemns and confronts comments by the white supremacists. Even with white supremacists, after the Poway and Pittsburgh attacks, we did not delve deeply into the wider community of hate online. “We got our man,” in finding the perpetrator, and that was enough. When dealing with the wider world of antisemitism in the US, that crosses racial lines, it is more difficult to confront. In the US, since it is difficult to accept that minorities might also be racist, the elephant in the room of black antisemitism is not mentioned. Too often, African American officials make openly antisemitic statements without fear of reaction. A school board member attacked “brutes of the Jewish community” after the Jersey City attack.

[It] appears that there is a deep antisemitic milieu not dissimilar to the way white supremacist antisemitism spreads online and among communities, fueling hatred of Jews among other American minority groups, specifically some black Americans. This antisemitism has been around for decades, gaining strength in the 1990s as Jews began to be blamed for the slave trade.
This trend in black antisemitism isn’t entirely unknown. It is discussed here and there, usually with excuses. For instance The Forward ran an article claiming that while “White antisemites are motivated by a hatred of Jews and a desire  for power, black anti-Semites are motivated by anger over gentrification, police brutality and slavery.” The article claimed that Jews “like all white people, part of the racist system that keeps black people under the foot of society.” This is the way a Jewish newspaper explained hatred of Jews. It defined Jews as “white” and gave credence to the idea that antisemitism is motivated by “police brutality and slavery.” This is a window into a very real worldview that openly says Jews are behind police brutality and slavery and gentrification.  In New York the police have stepped up their presence after attacks, but even that has been condemned as sending too many police to a neighborhood of “people of color.” Now Jews will be blamed for the police presence too instead of someone struggling against the violent antisemitism and inter-racial marches of solidarity against it.

A review of the discussion about the New York City attacks reveals an America that has trouble adjusting to and describing antisemitism when it comes from unexpected perpetrators. This is partly because the general view of racism in the US is that racism is not just about racism but about power. That is why in the US people look for racism in “white privilege” and the way racist views can be perpetuated even through code words and social settings and institutions. Confronted with the idea that minority groups are also racist, such as Hispanics using the n-word, there is a struggle to come to grips with how to define and confront. With the Jewish community there has been an agenda to argue over its relative “whiteness” and insofar as Jews are then removed from the intersectional agenda of minority groups fighting white privilege, Jews become either a separate category or part of the oppressive majority. This is odd but it is part of a wider agenda to assert that Zionism is racism and Jews are somehow linked to far-right groups through Israel and Israel is a modern apartheid colonialist structure. These ideas didn’t inform the Jersey City killings, but they are part of the milieu that informs those who might excuse the attacks.

Read it all.
Jew hatred is a hideous problem coming from extremists on both the Left and the Right. But as usual with the American media, it can’t talk about acts of hatred that violate the basic left-wing narrative that holds whites and “whiteness” responsible. Here’s a bog-standard turdlet of idiocy by a widely-published freelancer:

Elon Green ✔@elongreen
The suggestion that the Jewish left is unconcerned with attacks on American Jews is grotesque. We’re trying to rid the country of our gravest threat—Republican lawmakers.
457
10:39 AM - Dec 29, 2019
Twitter Ads info and privacy

162 people are talking about this
Earlier this year, writing in The Bulwark, Cathy Young explored the undeniable fact that anti-Semitism finds a home on both the Left and the Right.  I don’t agree with everything she writes. To be specific, the case of George Soros is a difficult one, because though Soros certainly receives anti-Semitic criticism, there’s a lot of legitimate criticism of his activism that has nothing to do with his being Jewish, and that is labeled anti-Semitic as a way of delegitimizing the criticism. That said, she’s right here:

In both cases, there are plenty of people who point fingers only at the other side while using their camp’s Jewish-friendly position, whether it’s support for Israel or support for strong civil rights safeguards, as a shield. In both cases, the label should be used carefully to avoid crying wolf or stifling legitimate debate.

I feel pretty certain that we are
a) going to have a lot of public discussion about the rise in violent anti-Semitism in this country, and
b) very little of that discussion is going to be honest or useful.


Then again, we live in a culture in which stating the belief that to be a male or a female is at its core a matter of genetics is enough to get you fired or made a pariah. When getting to the truth of an issue requires having to violate the strictures of identity politics, you may be sure that the truth will remain safely obscured behind walls of cant and sentimentality.