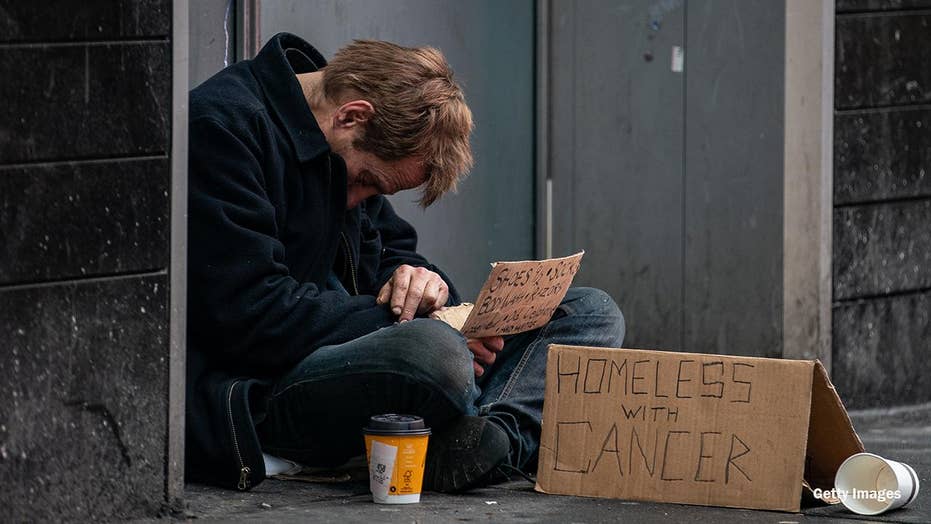 New York City’s homeless shelters are overloaded as an estimated 80,000 people sleep in shelters or on the streets, but Mayor Bill de Blasio’s administration has failed in its attempts to solve the problem -- and other cities are suffering from the Democrat’s policy, according to critics.

In 2017, the city’s Human Resources Administration implemented the Special One-Time Assistance (SOTA) program in attempts to take a bite out of the Big Apple’s homelessness crisis. Kathryn Kliff, an attorney for the Legal Aid Society’s Homeless Rights Project, told Fox News that SOTA was meant to be used as one of many tools for New York City to help homeless people and families get out of shelters and find permanent housing -- often outside the city.
“SOTA is a program that gives families that have a future ability to pay rent, a year's worth of rent upfront to help them get settled,” Kliff said. “It was created with the idea that once the program ends, they'll take over the rental payments because they have some designated source of income.”
Arianna Fishman, a spokesperson for New York City’s Department of Homelessness (DHS), explained to Fox News that SOTA “provides the extra help needed to get back on the path to permanency and stability through one-time assistance for those households with income that have identified housing, both within and beyond the five boroughs of New York City.”
Kliff added that SOTA has been used for families who may not qualify for other housing vouchers, and is meant to help them move out of shelters because housing in New York City has been so expensive.
Click Photo For VIDEO

Video
The cost of living in Manhattan reportedly was 148 percent higher than the average cost for major U.S. cities in 2019. The average rent in Manhattan for the month of December 2019 increased by 0.29 percent, from $4,108.24 in November to $4,120.20, according to M.N.S. Real Estate NYC.
David Salvatore, a member of the Providence City Council in Rhode Island, explained that while the concept of SOTA was positive, the implementation was lacking.
“I heard about it through various news outlets,” Salvatore, a Democrat, said. “It was news to many of us that new residents would be moving in who received a one-year rent subsidy from New York City.”
Fishman noted that the de Blasio administration was in contact with other jurisdictions, but did not indicate whether local governments previously had received a heads-up regarding SOTA.
“The de Blasio administration remains committed to open, ongoing engagement—and we are in direct and active conversations with localities that have sought to learn more about this program and the resources that NYC makes available to New Yorkers in need,” Fishman said. “Any locality that would similarly like to learn more about this program—or any of the other ways our city is aggressively addressing this challenge decades in the making—can reach out.”
Salvatore noted that poverty already has been concentrated in Providence. When speaking to Fox News, he pointed out that of Providence’s 25 neighborhoods, five of them bore the brunt of accepting Section 8 housing vouchers.
Click Photo For VIDEO

Video
The office of Providence Mayor Jorge Elorza, a Democrat, directed Fox News to a previous statement it had given on NYC’s SOTA program. It said, in part:
It is deeply concerning that the City of New York is relocating members of their community to ours and many others without informing us. To send these families to other cities and towns with no communication or support structure is irresponsible. We will continue to do everything we can to assist our residents, especially those experiencing homelessness, despite having limited resources. This irresponsible approach is taking away the resources that we as individual communities and the State of Rhode Island have.
DHS BOSS BLASTS NYC FOR SPRINGING ILLEGAL IMMIGRANT NOW HELD ON MURDER CHARGE
Salvatore echoed Elorza’s sentiments and explained that inventory levels in Providence were already low for people living in the state. “Ninety-four percent of the residents receiving housing vouchers are have found homes, but I think that speaks to the lack of inventory that's available not only here in Providence, but across our state.”
Kliff acknowledged New York City’s housing issues contributing to homelessness in New York. “Frankly, if we had a statewide rental subsidy, we might not need something like SOTA, but in the moment, for families who are just trying to get back on their feet, SOTA can be a very valuable tool.”
She explained problems that arose among her SOTA clients such as apartments without running water or heat during the winter.
“A lot of the calls we got came from New Jersey, and our clients would say that their apartment wasn’t safe, didn’t have running water, or heat,” Kliff said. “At that point in time, the city hadn't created any type of resource for these families on what they're supposed to do once that happens.”
Kliff explained that Legal Aid had written to the city and many of the problems had been addressed when it came to apartment inspections and living conditions. She noted, however, that Legal Aid had some clients who wanted to use SOTA and lived in New Jersey -- but it wasn’t possible. In fact, a federal lawsuit filed by multiple New Jersey mayors was challenging de Blasio’s SOTA program.
She argued the action came at the expense of her clients.
“Our clients are really frustrated because it's actually a better fit for them to be in New Jersey,” Kliff said. “It's closer to their work. They're able to work longer hours and commute easier.”
Both Salvatore and Kliff have been fighting for the interests of their clients and constituents, and wanted to give their homeless populations the best chances at success.
“We’re facing a nationwide crisis on homelessness and housing,” Salvatore said. “There are creative policies that are going in the right direction, but there needs to be coordination that doesn’t lead to careless implementation.”
“These are families that, but for the fact New York City is so expensive to live in, they probably could have already moved out and gone back to the community after whatever hardship led them to become homeless,” Kliff said. “These are people that you probably pass every day on the subway or interact with on a daily basis, and you would have no idea that what they're going through. They deserve respect and dignity.”