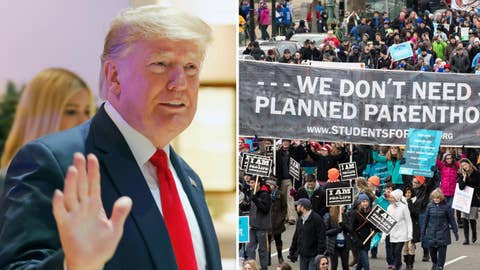 
President Trump on Friday became the first sitting president to address the annual March for Life rally in Washington, appealing to the anti-abortion movement with a call to protect the sanctity of life while accusing Democrats of becoming more "radical" on the issue.
The president, who for years was pro-choice, has since embraced a pro-life position and made clear on Friday that he plans to continue that agenda as he seeks reelection. Underscoring Trump's stance, his administration hours earlier moved to challenge California over a rule that mandates insurance plans cover elective abortion.
"It is my profound honor to be the first president in history to attend the March for Life," Trump told the crowd in Washington. "Unborn children have never had a stronger defender in the White House. ... Every life brings love into this world. Every child brings joy to a family. Every person is worth protecting."
President Donald Trump speaks at the "March for Life" rally, Friday, Jan. 24, 2020, on the National Mall in Washington. (AP Photo/Patrick Semansky)
TRUMP TO BECOME FIRST PRESIDENT TO SPEAK AT THE MARCH FOR LIFE
The president also panned Democrats' stances on abortion as "extreme" and went out of his way to thank the "tens of thousands of high school and college students who took long bus rides to be here in our nation's capital."
"When it comes to abortion, Democrats … have embraced the most radical and extreme positions taken and seen in this country for years and decades and you could even say for centuries," Trump said, accusing many of supporting "taxpayer-funded abortion all the way up until the moment of birth."
While many Democrats have embraced more permissive stances on abortion – with the word "rare" seemingly disappearing from the "safe, legal and rare" slogan coined by former President Bill Clinton – there are still pro-life Democrats. Last year, for example, Louisiana's Democratic Gov. John Bel Edwards signed a bill that would prohibit women from having an abortion once a baby's heartbeat is detected, in almost all cases.
Supporters cheer as President Donald Trump speaks during the annual "March for Life" rally on the National Mall, Friday, Jan. 24, 2020, in Washington. (AP Photo/ Evan Vucci)
Other Democrats, however, have moved to purge pro-life members of their party.
“As a party, we should be 100 percent pro-choice, and it should be non-negotiable,” New York Democratic Sen. Kirsten Gillibrand, who was running for president in 2020, told The Washington Post last year. Further, state legislative measures in places like New York and Virginia have stirred a new national debate over late-term abortion.
Trump's comments at the March for Life come as his administration is threatening to cut federal funds to California over a mandate that health insurance plans in the state cover abortion. The Department of Health and Human Services is alleging that the state is violating federal law that prevents states from mandating such coverage for elective abortion. A press release noted this is not the first time the Trump administration has pressed California on violating "federal conscience statutes."
Anti-abortion activists protest outside of the U.S. Supreme Court, during last year's March for Life. (AP Photo/Jose Luis Magana, File)
MARCH FOR LIFE SEES MORE EVANGELICAL SUPPORT AS TRUMP BECOMES FIRST PRESIDENT TO ATTEND
"Once again, President Trump’s administration is delivering on his promise to protect human life and all Americans’ freedom of conscience," HHS Secretary Alex Azar said. "Under President Trump, HHS has been vigorously enforcing the statutes Congress passed to protect Americans’ consciences and institutionalizing these protections within the department’s civil rights work."
Trump also touted his judicial appointments at the March for Life rally. The president's largely conservative appointments to federal courts have led many to believe Roe v. Wade – the landmark Supreme Court decision that prohibited states from banning the procedure at certain points during pregnancy – may be in danger of falling if a challenge to it reaches the Supreme Court.
"We have confirmed 187 federal judges who apply the Constitution as written, including two phenomenal Supreme Court justices," Trump said to loud applause.
Vice President Mike Pence and his wife Karen also appeared at the March for Life via video. They were in Rome representing the United States, and Pence mentioned that he thanked Pope Francis at the Vatican for the work of American Catholics in the pro-life movement.
"I couldn't be more proud to be the vice president to the most pro-life president in United States history," Pence said. "Life is winning in American again."
The March for Life's timing is significant as it takes place near the anniversary of Roe v. Wade. The actual anniversary of the ruling was earlier this week.
“We are deeply honored to welcome President Trump to the 47th annual March for Life," March for Life president Jeanne Mancini said to Fox News on the president's attendance. "He will be the first president in history to attend and we are so excited for him to experience in person how passionate our marchers are about life and protecting the unborn."
The march was expected to draw 100,000 activists to the nation's capital as Republicans like Trump pursue an ambitious pro-life agenda. While pro-life activists have heaped praise on the president for his pro-life policies, his actions have sparked lawsuits and condemnation from groups like Planned Parenthood.
"Further confirmation that the sitting President of the United States is determined to end the American people's ability to access abortion," acting Planned Parenthood president and CEO Alexis McGill Johnson tweeted Wednesday in response to Trump's appearance on the march.
Fox News' Sam Dorman, Vandana Rambaran contributed to this report.
Source>https://www.foxnews.com/politics/trump-becomes-first-president-to-speak-at-march-for-life
Posted by theodore miraldi at 4:24 PM