Bloomberg in Leaked 2015 Clip: ‘95% of Murderers Fit ONE Description, Xerox It’


Former New York City Mayor Michael Bloomberg publicly claimed that cops across the country could use a “Xerox” description to identify suspected murderers — and also admitted that his “stop-and-frisk” policy led the NYPD to target minority kids in minority neighborhoods, a newly unearthed recording revealed Tuesday.

Benjamin Dixon@BenjaminPDixon
Audio of @MikeBloomberg’s 2015 @AspenInstitute speech where he explains that “you can just Xerox (copy)” the description of male, minorities 16-25 and hand to cops.

Bloomberg had video of speech blocked.

Perhaps because of the problematic explanation he gives for #StopAndFrisk 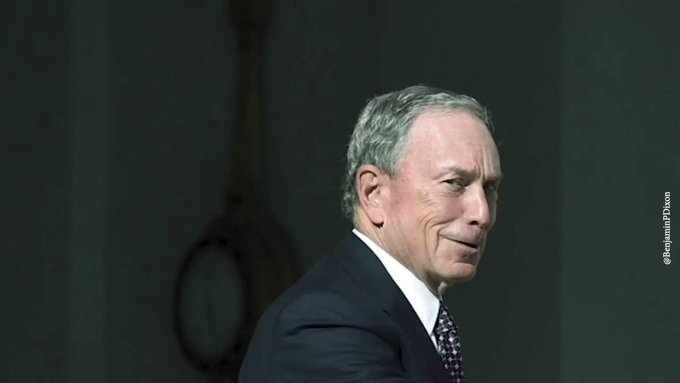 “Ninety-five percent of murders, murderers and murder victims fit one M.O. You can just take a description, Xerox it, and pass it out to all the cops,” Bloomberg told the Aspen Institute in 2015.
“They are male, minorities, 16 to 25. That’s true in New York, that’s true in virtually every city (inaudible).”
Bloomberg — who apologized for “stop-and-frisk” last year, shortly before becoming a Democratic candidate for president — said that “one of the unintended consequences is people say, ‘Oh my God, you are arresting kids for marijuana that are all minorities.'”
“Yes, that’s true. Why? Because we put all the cops in minority neighborhoods. Why do we do it? Because that’s where all the crime is,” he said.
The billionaire media mogul tried to justify the NYPD’s use of “stop and frisk” — which was ruled unconstitutional by a federal judge — by claiming, “You’ve got to get the guns out of the hands of people that are getting killed.”
“And the way you get the guns out of the kids’ hands is to throw them up against the wall and frisk them … And then they start … ‘Oh, I don’t want to get caught,’ so they don’t bring the gun. They still have a gun, but they leave it at home.”
He also suggested that the ends of “stop-and-frisk” justified the means.
“If you can stop them from getting murdered, I would argue everything else you do is less important,” he added.
The recording of Bloomberg’s remarks began circulating on Twitter after being featured on “The Benjamin P. Dixon Show,” in an episode released Tuesday.
Shortly after he gave the speech, representatives for Bloomberg asked the Aspen Institute to not distribute footage of his appearance, according to the Aspen Times.
Before entering the Democratic presidential primary last November, the former mayor apologized at one of New York City’s largest churches for his past policy.
“I was totally focused on saving lives. But as we know, good intentions aren’t good enough. As crime continued to come down as we reduced stops — and as it continued to come down during the next administration, to its credit — I now see that we could and should have acted sooner, and acted faster, to cut the stops,” Bloomberg said at East New York’s Christian Cultural Center.

“I can’t change history. Today, I want you to know that I realize back then I was wrong, and I am sorry,” he added.
In a statement to The Post, Bloomberg said, “I inherited the police practice of stop-and-frisk, and as part of our effort to stop gun violence it was overused. By the time I left office, I cut it back by 95%, but I should’ve done it faster and sooner. I regret that and I have apologized — and I have taken responsibility for taking too long to understand the impact it had on Black and Latino communities.
“This issue and my comments about it do not reflect my commitment to criminal justice reform and racial equity…The President’s attack on me clearly reflects his fear over the growing strength of my campaign. Make no mistake Mr. President: I am not afraid of you and I will not let you bully me or anyone else in America.”
Source>https://nypost.com/2020/02/11/leaked-bloomberg-audio-shows-him-defending-throw-them-up-against-the-walls-stop-and-frisk/
Posted by theodore miraldi at 5:11 PM