Another Important Institution Disgraced by Those Who Prefer Having SEX With Young CHILDREN. This Perverted Behavior Needs To STOP!
It has Permeated our Society and Ruined too many lives....tmiraldi 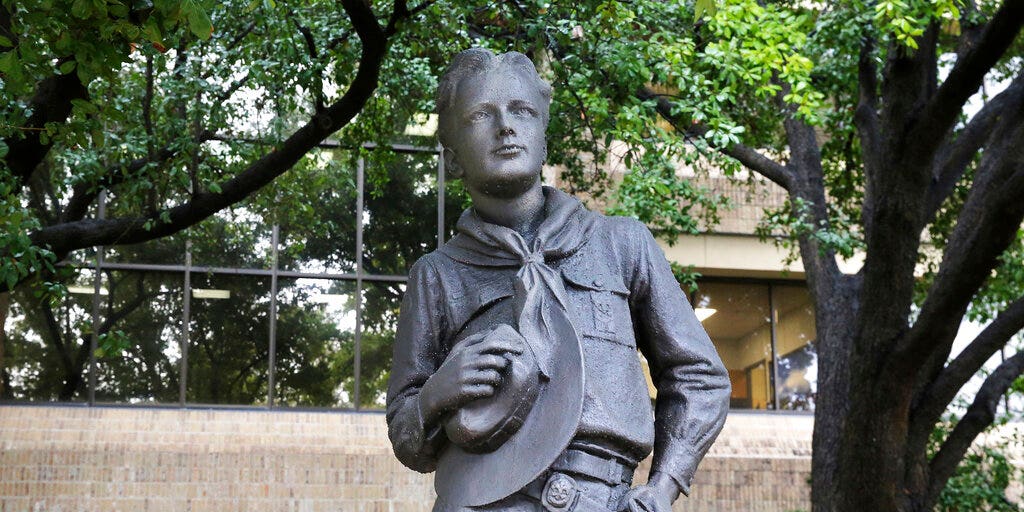 The Boy Scouts of America (BSA) filed for Chapter 11 bankruptcy protection early Tuesday after decades of sexual abuse claims within one of the country's largest youth organizations.
The petition, filed in Delaware bankruptcy court, halts the hundreds of lawsuits the BSA is facing that allege sexual misconduct by people within the 110-year-old organization over the years.
Sexual abuse settlements had reportedly strained the Boy Scouts' finances, with states passing laws last year so victims from long-ago abuse can sue for damages.
ANTHONY WEINER HAS PARENTS UPSET AS HE SEEKS MORE ACCESS AT SON'S SCHOOL: REPORT
Mike Pfau, an attorney whose firm was representing 300 victims in New York as of last April, said the bankruptcy would be "bigger in scale than any other sex abuse bankruptcy."
A statue stands outside the Boys Scouts of America headquarters in Irving, Texas, on Feb. 12. The Boy Scouts of America has filed for bankruptcy protection as it faces a barrage of new sex-abuse lawsuits. The filing Tuesday, Feb. 18, in Wilmington, Delaware, is an attempt to work out a potentially mammoth compensation plan for abuse victims that will allow the 110-year-old organization to carry on. (AP Photo/LM Otero)
“You’re talking about thousands of perpetrators," Seattle-based lawyer Michael Pfau, who has represented more than 300 Boy Scout victims in 34 states, told the New York Daily News. "You’re talking about tens of thousands of victims. This will be the largest bankruptcy the country has ever seen, and likely one of the largest corporate bankruptcies.”
The national organization said they made the move to fairly compensate victims harmed during their time in scouting and to keep the 100-year-old nonprofit running for years to come.
A Victims Compensation Trust will reportedly be set up during the bankruptcy process, which the organization says will provide "equitable compensation to victims."
COUNTRY SINGER DANIEL LEE MARTIN DEAD BY SUICIDE AMID CHILD SEX ABUSE CHARGES
"The BSA cares deeply about all victims of abuse and sincerely apologizes to anyone who was harmed during their time in Scouting. We are outraged that there have been times when individuals took advantage of our programs to harm innocent children," said Roger Mosby, president and chief executive officer of the BSA.
"While we know nothing can undo the tragic abuse that victims suffered, we believe the Chapter 11 process – with the proposed Trust structure – will provide equitable compensation to all victims while maintaining the BSA's important mission," he added.
The BSA has issued an Open Letter to Victims, which can be read online, and will run as a full-page ad in USA Today on February 19.
Scouting programs will continue during the BSA's bankruptcy process and for many years to come, the organization says. Local councils are not filing for bankruptcy, as they are legally separate and distinct organizations.
CLICK HERE TO GET THE FOX NEWS APP
The bankruptcy petition reportedly listed the Boy Scouts' assets as between $1 billion and $10 billion, and its liabilities at $500 million to $1 billion.
The Associated Press contributed to the report.
Source>https://www.foxnews.com/us/boy-scouts-of-america-files-for-bankkruptcy-after-sex-abuse-lawsuits
Posted by theodore miraldi at 8:12 AM