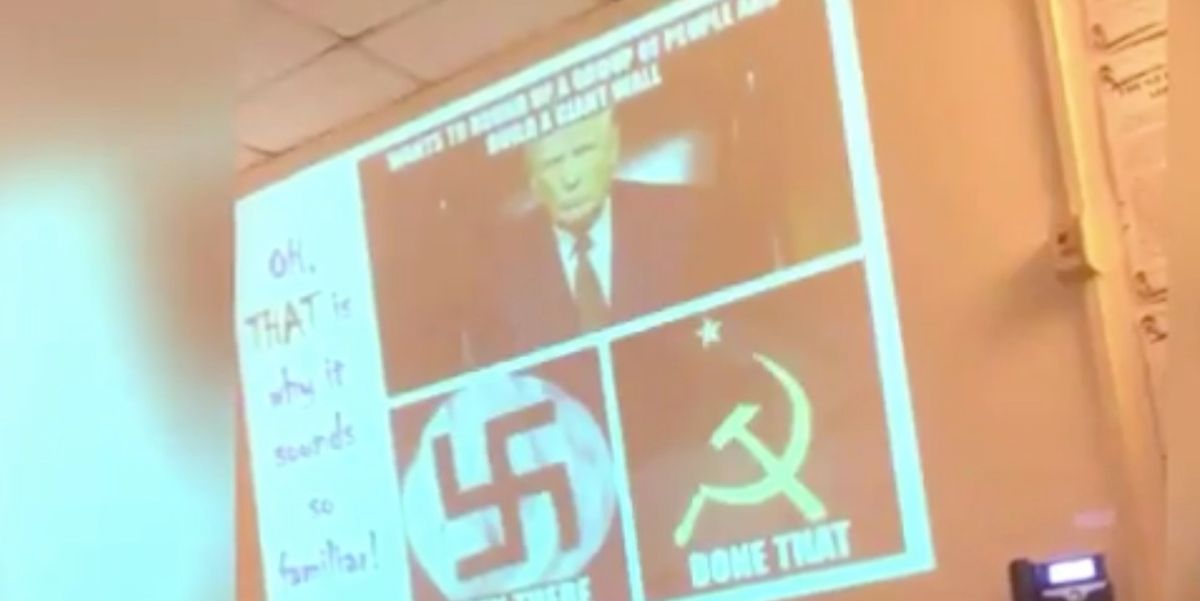 
TOWSON, Md. — Republican lawmakers in Maryland are criticizing a history lesson at a public high school near Baltimore that compared President Donald Trump with Nazis and communists.
A slide used in an Advanced Placement history class at Loch Raven High School in Towson shows a picture of Trump above pictures of a Nazi swastika and a flag of the Soviet Union. Two captions read “wants to round up a group of people and build a giant wall” and “oh, THAT is why it sounds so familiar!”
The Baltimore Sun reports that state Del. Kathy Szeliga arranged for copies of the slide and the school system’s response to be sent to her fellow Baltimore County lawmaker. She also posted the image on Facebook.
“It is horrific. It is educational malfeasance,” Szeliga said Friday at a meeting of the county’s delegation.
Baltimore County Councilman Wade Kach called it “a piece of propaganda” that didn’t belong in a classroom.
The school system said the slide was not part of the resources it provides for AP history teachers.
Charles Herndon, a spokesman for Baltimore County schools, said students in advanced high school classes are “discerning, intelligent students who are going to be able to draw their own inferences and draw their own conclusions.”
“The topics being discussed in the class included World Wars and the attempts by some leaders throughout history to limit or prevent migration into certain countries. In isolation and out of context with the lesson, the image could be misunderstood,” the school district said in a statement.
The school system said the issue had become a personnel matter “which will be appropriately addressed by the school administration and is not subject to further clarification.”
Source>https://www.washingtontimes.com/news/2020/feb/23/loch-raven-high-school-history-lesson-compares-don/
Posted by theodore miraldi at 12:47 PM