Former New York Mayor Michael Bloomberg once said that farming and factory jobs don’t require much gray matter, as opposed to information-era jobs.
In a 2016 talk at Oxford University in England, a clip of which went viral over the weekend, the 2020 Democratic presidential contender belittled both agricultural and industrial jobs as simple and simplistic.
“I could teach anybody, even the people in this room” to be a farmer, he said, calling agriculture “a process.”
“You dig a hole, you put a seed in, you put dirt on top, add water, up comes the corn,” he said.
He spoke similarly of factory jobs as mechanical repetition requiring no brain power.
“You put the piece of metal in the lathe, you turn the crank in the direction of the arrow, and you can have a job,” he continued.
Mr. Bloomberg then said working in the information economy is “fundamentally different, because it’s built around replacing people with technology and the skill sets that you have to learn are how to think and analyze. And that is a whole degree level different. You have to have a different skill set, you have to have a lot more gray matter,” he said. 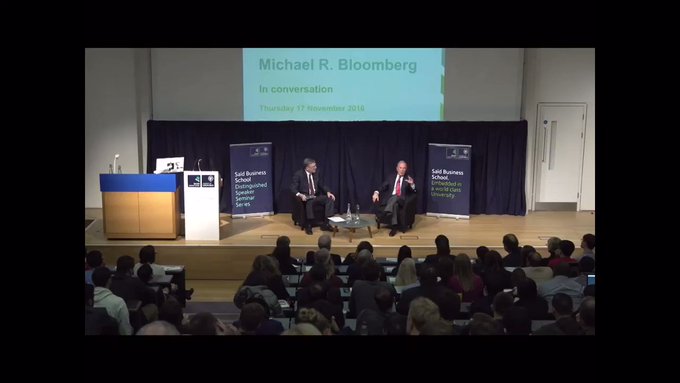 10K people are talking about this

The backlash on social media was swift as numerous critics on both the left and the right of the political spectrum noted pointed out the billionaire’s dismissive tone, said he had an outdated notion of agriculture and compared the remarks to Hillary Clinton’s “deplorables,” Barack Obama’s “bitterly clinging” and Mitt Romney’s “47%” gaffes
“Bloomberg: mocking American #farmers is no way to unify the country. He might as well have called them #deplorable #rubes. Way to reveal yourself,” wrote Chicago Tribune columnist John Kass.
Added Brit Hume of Fox News Channel: “Bloomberg seems to have acquired his knowledge of farming by watching Hee-Haw.”
Source>https://www.washingtontimes.com/news/2020/feb/16/michael-bloomberg-video-belittles-farming-factory-/
Posted by theodore miraldi at 11:02 AM