Pelosi SHAMED Herself at Trump’s State of the Union Address: Goodwin 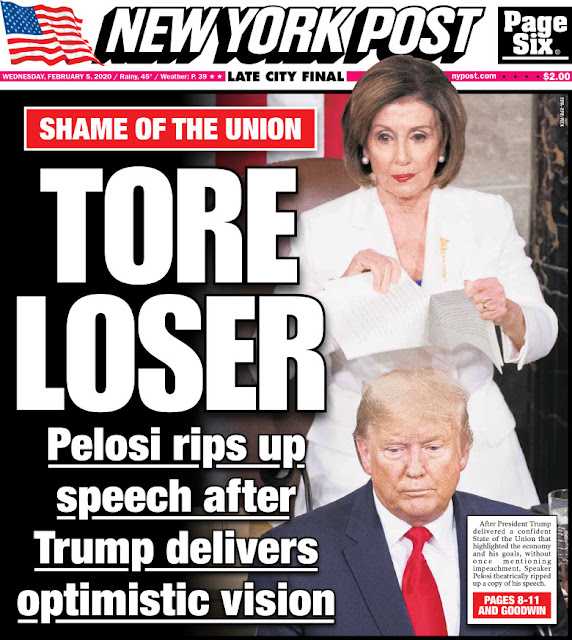 Here’s a question for Speaker Nancy Pelosi: Have you heard of Albert Einstein’s definition of insanity? The one where he says it’s “doing the same thing over and over again and expecting different results?”
To judge by your conduct, I’m guessing you haven’t. Either that or you think Einstein was an idiot, too.
Then again, maybe you’re a secret Republican agent trying to re-elect President Trump. Is that why you keep making the same mistake over and over again?
You’ve been screwing up for three years, starting with the juvenile resistance where you refused even to negotiate over big national interests such as border control. Then, just when it seemed you couldn’t sink any lower than that cheap, partisan impeachment you engineered, you hit a new low during the State of the Union.
Your mumbling and sneering smiles throughout President’s Trump’s powerful address were bad enough, but your decision to tear into shreds your copy of his speech and drop it like a dead fish was shameful beyond measure.
Coming immediately after he finished, and while he was still on the podium, you had to know the television cameras would catch you. No doubt that was your goal — to display your disgust to the nation and the world. Viva la resistance!

Message received, and here’s back at you: You disgraced your office and all of congress.
If you had an ounce of decency and respect for something other than your own power, you would apologize. Better yet, take a hike and give your job to somebody who wants to help make America better, not tear it up.
House Republicans must immediately demand a censure vote, making clear their strong disapproval of Pelosi’s temper tantrum. Let Democrats show where they stand on such reprehensible conduct.
In one sense, Pelosi’s distress is understandable. Trump’s address was long because he had a long list of big accomplishments to cite, and every Republican standing ovation had to drive her closer to the edge. She often seemed to be talking to herself, and finally snapped.
He touched all the bases, foreign and domestic, and used an extensive list of guests in the gallery to great effect. From widowed military wives to Rush Limbaugh and several people who benefitted from administration policies, the president aimed to show through examples what he described as the “Great American Comeback.”Trump, who either snubbed or didn’t see her offer of a handshake when he first took the podium and handed her the speech, did not mention impeachment, which will conclude Wednesday with his acquittal. If you didn’t know what has been going on in Washington in recent months, there was nothing in his speech that would have suggested anything out of the ordinary.
The economy is, naturally, at the heart of it, and his recitation of record low unemployment, rising wages, soaring consumer confidence and stock markets are so familiar that it is easy to forget how important they are to the health and welfare of millions of families.
Pelosi certainly has forgotten. She and many fellow female Dems wore white to protest — who knows what? — and most could not bring themselves to cheer the good news for their fellow Americans. Even when the president announced the historically low unemployment rate for black and Latino Americans, people Dems profess to care about, they would not rise.
Trump also talked of foreign policy, of taking on terrorism and his recounting of the military missions that took out Iranian terror mastermind Qassem Soleimani and others, one of the few moments when the entire audience stood to applaud. Which was odd because Pelosi only complained at the time because he didn’t first tell her.
Yet the Speaker, who made a point of telling TV anchors Tuesday that she hasn’t spoken to Trump since October, when impeachment began, demonstrated repeatedly that she hasn’t learned anything from her failures and the president’s success. Her impeachment jihad was rejected by voters as well as by House and Senate Republicans, with the moderate Susan Collins of Maine faulting the effort for, among other things, Pelosi’s decisions to speed rush the effort through the House, then sit on the articles for 33 days before sending them to the Senate.
None of it made any sense, especially in light of the GOP firewall in the Senate. Still, Pelosi once again charged into the cannon fire after the speech, her only weapon her personal hatred of the commander-in-chief.
It’s not proving to be much of a fight. The president is on a winning streak, and he had every right to brag about his record in his third State of the Union address. The country has noticed, as he is reaching his highest approval ratings in the polls since he took office.
Truth be told, he couldn’t do it without Pelosi’s help. She has overplayed her hand time and again, and her insistence that Trump is an illegitimate president has presented Americans with a stark either-or-choice. They wisely rejected impeachment as too radical, which is something she initially said herself before succumbing to the mob mentality.
And she’s just led her party into another embarrassing dead end. Combined with Trump’s strong record, the chaos in the Dems’ Iowa caucus, the lackluster field of presidential candidates and the failed impeachment, the president is off to a roaring start for the campaign.
We can add Pelosi’s televised tantrum to the growing list of his achievements.
Source>https://nypost.com/2020/02/04/nancy-pelosi-shamed-herself-at-trumps-state-of-the-union-address-goodwin/
Posted by theodore miraldi at 8:15 AM