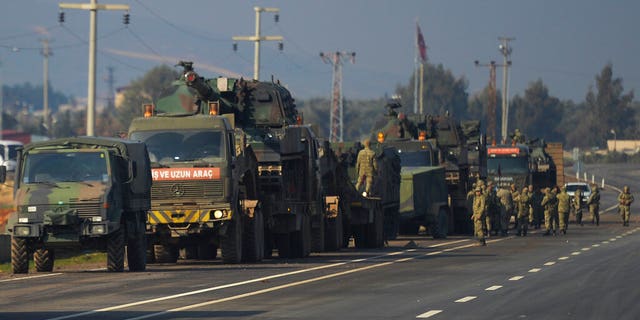 Turkey said Friday that it ordered troops stationed along the Syrian border to stand down and allow refugees to cross into the European Union after a Syrian government airstrike killed 33 Turkish troops in what was seen as a major escalation in the conflict, a  report said.


A report said that hundreds of refugees could be seen flocking to the Greece and Bulgaria borders.
"We have decided, effective immediately, not to stop Syrian refugees from reaching Europe by land or sea," an official told Reuters. "All refugees, including Syrians, are now welcome to cross into the European Union."
The decision by Ankara was widely seen as an attempt to pressure EU countries in assisting in the conflict.
The deaths, which came in an attack late Thursday in northeast Syria, were a serious escalation in the direct conflict between Turkish and Russia-backed Syrian forces that has been waged since early February.
GET THE FOX NEWS APP
The attack also sharply raises the risk of direct military confrontation between Turkey, a NATO member, and Russia. Ambassadors from NATO countries were holding emergency talks on Friday at the request of Turkey, a member of the alliance.
The  Associated Press contributed to this report
Source>https://www.foxnews.com/world/turkey-to-allow-syrian-refugees-free-access-to-europe-after-troop-attack
Posted by theodore miraldi at 7:28 AM