PRC moral turpitude forces us to consider the unthinkable. 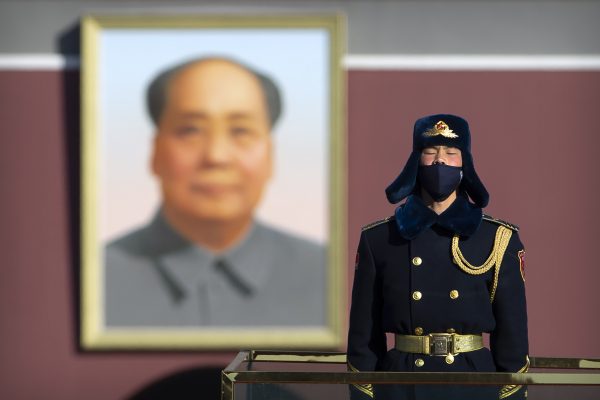 A member of a Chinese honor guard wears a face mask as he stands guard on Tiananmen Square in Beijing, Tuesday, Feb. 4, 2020.
Credit: AP Photo/Mark Schiefelbein


We often ascribe a basic level of humanity to even the cruelest leaders, but People’s Republic of China leader Xi Jinping’s actions have forced us to rethink this assumption. Although the emergence of the novel coronavirus now known as SARS-CoV-2 was probably not due to China’s actions, the emphasis that its authoritarian system places on hiding bad news likely gave the disease a sizable head start infecting the world. But most ominously, China’s obsession with image and Machtpolitik raises serious questions about its lack of moral limits.

At some point the Chinese Communist Party learned of the epidemic and made a decision to hide its existence, hoping it went away. Exposés in Hong Kong’s South China Morning Post and the Chinese mainland’s Caixin show that the information that did flow out of China early in the crisis did so only because of the courage of individual Chinese people in the face of government repression. People in the Wuhan epicenter, however, began to get wise — and scared (here and here) — by the end of December 2019, forcing their government to say something. The authorities gave the impression of a nontransmissible disease already under containment. We know now this was entirely false, likely designed more to ease civil unrest than protect the people.

The mayor of Wuhan even suggested that the central government prevented him from revealing details about the epidemic until January 20. Considering the first public announcements came out of Wuhan on January 1, we can assume that Xi had a sense of the danger prior to that.

Clearly, downplaying the disease wasn’t working and it was time for the Party to get serious. But how serious? Would it provide full cooperation to the international community? Would being seen as the source of this virus hurt its international image? Beyond these, there was a darker dimension: the more Beijing cooperated, the less the disease stood to affect other countries. This includes countries China sees as a threat to its existence, like the United States. Why should China suffer the effects of a pandemic while others stayed safe — and increased their strength relative to China — based on China’s own costly experience?

Such a question is of course inimical to human decency. And yet we must consider that Xi Jinping has produced the greatest program of ethnic cleansing in the world today. He has curtailed freedoms in China severely and is the father of the panopticon state. His incessant military buildup threatens neighbors while using economic and other subversive means to erode the sovereignty of countries around the world. We should not assume it was beyond his imagining to withhold a degree of support from the international community to ensure that China would not suffer alone.

Strong evidence supports this idea. Hearing the World Health Organization (WHO) repeat and praise the Party line while giving short shrift to health advice until quite recently has alarmed many. Seeing Beijing sell defective wares and claim it as humanitarian aid has angered many more. Spreading disinformation during the crisis and hinting at using life-saving goods for leverage (original here) — while denying even the faintest hint of wrongdoing — I suspect have ruined China’s reputation for some time to come. In short, China’s good offices have been reserved almost entirely for burnishing its image at the world’s expense, while calling it “the greatest kindness and good deeds.”

None of this can prove whether or when Xi made a deliberate decision to withhold information in order to imperil others. However, as a long-time student and admirer of China, it is with great sadness I must concede that such a state — and its increasingly paranoid leader — might very well provide less than full cooperation to stem the pandemic of the century in the crass pursuit of its own interests. This may constitute biological warfare. But even if it doesn’t Xi should be brought to account for his other crimes against humanity.

Posted by theodore miraldi at 10:48 AM