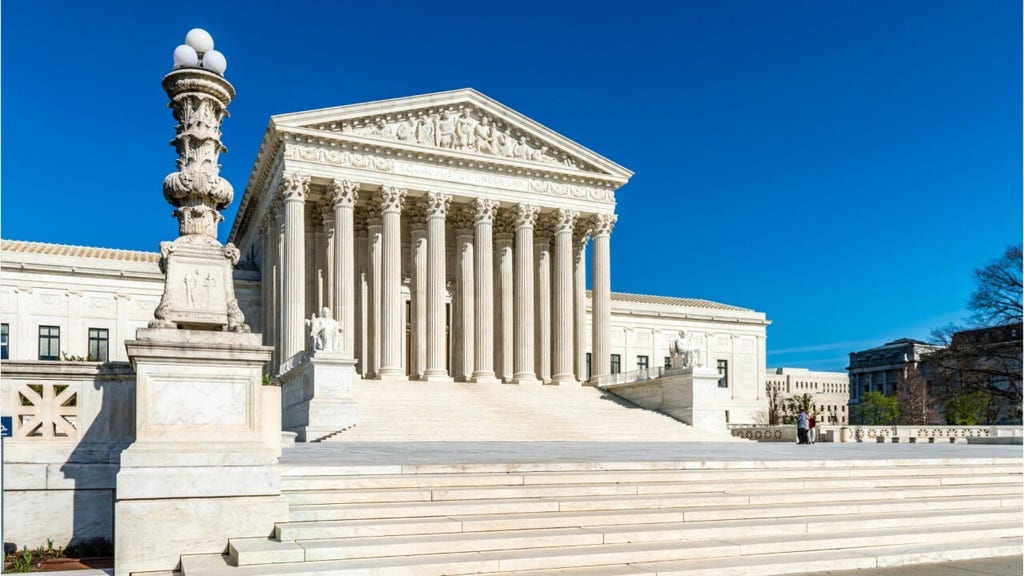 
The U.S. Supreme Court on Thursday upheld a lower court's decision that an immigrant with lawful permanent resident status cannot fight deportation due to a previous offense, even though that crime was not grounds for his removal.
In a 5-4 ruling with conservative justices on one side and liberals on the other, the court ruled for the Trump administration in holding that the statute in question, as drafted by Congress, requires deportation in the case of Andre Barton, even though the assault offenses that prevent him from appealing were not enough to deport him in the first place.
SUPREME COURT RULES CRIMINAL JURY VERDICTS MUST BE UNANIMOUS, OVERTURNING DECADES-OLD PRECEDENT
"Removal of a lawful permanent resident from the United States is a wrenching process, especially in light of the consequences for family members," Justice Brett Kavanaugh wrote in the court's opinion. "Removal is particularly difficult when it involves someone such as Barton who has spent most of his life in the United States. Congress made a choice, however, to authorize removal of noncitizens— even lawful permanent residents—who have committed certain serious crimes. And Congress also made a choice to categorically preclude cancellation of removal for noncitizens who have substantial criminal records. Congress may of course amend the law at any time. In the meantime, the Court is constrained to apply the law as enacted by Congress."
The controversy deals with an immigration law that allows defendants to apply for cancelation of deportation, but only if they satisfy certain requirements, including not having committed a particular offense within their first seven years of continuous residence in the U.S. This limitation, known as the "stop-time rule," refers to offenses that render individuals inadmissible or deportable. Barton, who is being deported for drug and firearms offenses, had committed aggravated assault offenses during that seven-year period, but those offenses did not qualify for deportation.
The court's majority saw no problem with this, claiming that the assaults triggered the stop-time rule because they qualify as crimes that would render someone inadmissible. Kavanaugh noted said that just because the assaults were not the initial grounds for deportation, they can still come into play, just as outside factors can be considered in criminal matters.
SUPREME COURT TO HOLD REMOTE ORAL ARGUMENTS IN SELECT CASES, INCLUDING TRUMP FINANCIAL RECORDS APPEAL
"It is entirely ordinary to look beyond the offense of conviction at criminal sentencing, and it is likewise entirely ordinary to look beyond the offense of removal at the cancellation-of-removal stage in immigration cases," Kavanaugh wrote.
The particular dispute between the two sides of the court dealt with the language of the statute, which says a defendant cannot have their deportation canceled if they had committed "an offense referred to in section 1182(a)(2) of this title that renders the alien inadmissible to the United States under section 1182(a)(2) of this title or removable from the United States under section 1227(a)(2) or 1227(a)(4) of this title.”
The conservative majority took this to mean that Congress was including both offenses that would render someone inadmissible as well as those that would make them removable, meaning that because aggravated assault would leave a person inadmissible, it triggers the provision keeping Barton from having his deportation canceled. Kavanaugh noted that the Second, Third, Fifth, and Eleventh Circuit Courts of Appeal all hold the same view, with only the Ninth Circuit holding otherwise.
Justice Sonia Sotomayor's dissent, on the other hand, argued that Congress was referring to two separate types of situations: one where a defendant is seeking admissibility, and another where they have already been admitted and are fighting removal. Because Barton's assault convictions were not enough for deportation, Sotomayor argued, they are not enough to keep a judge from canceling his removal.
"Because of the Court’s opinion today, noncitizens who were already admitted to the country are treated, for the purposes of the stop-time rule, identically to those who were not—despite Congress’ express references to inadmissibility and deportability. The result is that, under the Court’s interpretation, an immigration judge may not even consider whether Barton is entitled to cancellation of removal—because of an offense that Congress deemed too trivial to allow for Barton’s removal in the first instance."
Fox News' Bill Mears contributed to this report.
Source>https://www.foxnews.com/politics/supreme-court-upholds-immigrants-removal
Posted by theodore miraldi at 2:06 PM