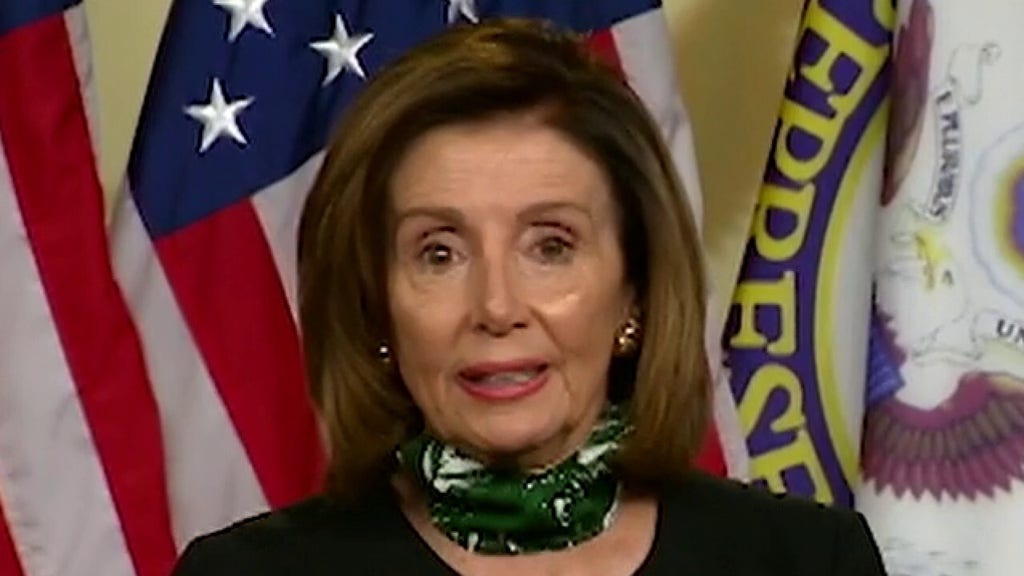 
When House Speaker Nancy Pelosi announced the $3 trillion coronavirus spending bill she and her allies had written – a bill passed by House Democrats Friday night with only a single Republican vote in support – my first reaction was that it would be dead on arrival in the Senate and that the move made no sense.
The bill is the most expensive spending bill ever passed in the history of the House of Representatives, but Pelosi took no public comment, no Republican input, and didn’t consult with the Republican-controlled Senate or the White House on the bill.
As we learned about the nuttier parts of the bill after it was introduced, it struck me almost as a joke.
JUSTIN HASKINS: $3T CORONAVIRUS RELIEF BILL PASSED BY HOUSE DEMS FUNDS MOST RADICAL PROGRAMS IN US HISTORY
In fact, I tweeted: “How do you explain a House Democratic Party so crazy that their new $3 trillion proposal has 68 references to Cannabis and only 52 references to jobs? Maybe Speaker Pelosi of San Francisco believes ‘California Dreamin’ could become the new national anthem.”
There are a remarkable number of impossible-to-explain provisions in the bill. Some of them would:
Provide money to people in the country illegally.
Allow illegal immigrants to work when more than 30 million Americans are out of work.
Provide taxpayer funding for abortion, even though Americans oppose taxpayer funding for abortions by 55 percent to 29 percent.
Block voter identification laws – even though 80 percent of Americans favor such laws.
Give state and local governments, which already collect your tax dollars, $1 trillion more of your tax dollars.
Give a tax cut to the richest Americans in blue states.
Impose a host of other liberal fantasies on Americans.
In fact, the bill is so bad that I had also tweeted: “Trump District Democrats need to be pushed on their support or opposition to the Pelosi $3 trillion bill.”

As we learned about the nuttier parts of the bill after it was introduced, it struck me almost as a joke.

This bill could become a disaster for Democratic candidates if Republicans bear down and focus on it. Republicans will hate the bill. Independents and moderates will find large parts of the bill totally unacceptable.
There will be an entire series of issues in which 75 percent or 85 percent of the country will be deeply opposed to the Pelosi bill.
If this choice of which country we should become was the centerpiece of the U.S. House and Senate elections, it would probably guarantee a Republican landslide this fall. In this bill, Pelosi and the Democrats are advocating deeply unpopular issues.
Yet, we know Speaker Pelosi has had a long career in Congress (she was first elected 1987) fighting and earning her way to become the first woman speaker of the House (2007-2011), and then endured eight years as minority leader to become speaker for a second time.
Pelosi is a survivor. She is tough. She is hardworking, and she has been through a lot of campaigns – and seen and executed a lot of maneuvers.
Therefore, you must assume there is a sound strategic reason for Pelosi to bring forward a bill that is this radical, expensive, and controversial.
After spending days trying to figure out why she would lead her party into such an exposed position, let me offer this three-part proposition.
First, Pelosi probably believes this is going to be a base turnout election, and she knows from all the polls that Republicans are more excited about the election than Democrats.
Pelosi had this reinforced by the special elections for House seats in Wisconsin and in California.
In Wisconsin, the GOP handily kept a House seat in an important swing state for the presidential election.
California should have been a special shock to Pelosi, because the Republicans had not converted a Democratic seat in her home state since 1998. This breakthrough, after 22 years, came in a district Hillary Clinton had carried in the 2016 presidential election. The GOP win was clearly a function of a much more energized Republican base.
From Pelosi’s perspective, mobilizing the cannabis users and liberal investors is a useful move, too. They are as much part of the Democratic base as traditional small business owners are part of the Republican base.
Arousing the hardcore, pro-abortion activists helps Pelosi with turnout and donations. Disciplined repetition of the word “diversity” appeals to her ideological activists and – to a lesser extent – minority communities.
Appealing to the illegal immigrant community is a useful thing for Pelosi. And Democrats are working to make it possible for illegal immigrants to vote in a number of states.
CLICK HERE TO SIGN UP FOR OUR OPINION NEWSLETTER
Giving a tax cut to the richest people in the bluest states is a direct favor to her donor base and helps the public employee unions in those states by making state and local taxes more bearable.
Pouring extra cash into the worst-run blue states with the biggest pension debt (think Illinois and New Jersey) directly helps Pelosi’s public employee union allies and the Democratic politicians in those states.
Pelosi has likely calculated that – as usual – the Republican candidates will forget to focus. She also must be betting that in a few weeks the Republican and independent voters will have forgotten this monstrosity of a leftwing wish list.
CLICK HERE TO GET THE FOX NEWS APP
Yet, Pelosi’s base will be fired up to elect former Vice President Joe Biden and Democratic majorities in the House and Senate so they can get the ideological and financial goodies she has woven into this bill.
It is a major gamble on Pelosi’s part. If the Republicans have enough discipline and endurance, she will pay a substantial price for it.
Source>https://www.foxnews.com/opinion/newt-gingrich-pelosis-crazy-3t-coronavirus-spending-bill-may-have-secret-purpose-dont-underestimate-her
Posted by theodore miraldi at 10:24 AM