Legal challenges to governors' coronavirus shutdown orders are piling up nationwide, putting state leaders on the defensive as citizens and businesses itching to get back to normal take their arguments to court -- in some cases succeeding at voiding the governors' actions.
The Wisconsin Supreme Court, for example, struck down Democratic Gov. Tony Evers' "safer at home" order on the grounds that his administration did not have the power to unilaterally impose the restrictions without the input of the state legislature. Evers Monday gave up his effort to reimpose statewide rules to slow the coronavirus' spread after it became clear he would not be able to come to an agreement with Republican lawmakers.
CLICK HERE FOR COMPLETE CORONAVIRUS COVERAGE
"The Republicans made it very clear they don’t believe a statewide approach is the right way to go at this point in time," he said. "It doesn’t make a lot of sense spending a lot of time doing something we know isn’t going to be successful."
Wisconsin's Republican-led Legislature blocked efforts by Wisconsin Gov. Tony Evers to reinstitute statewide coronavirus restrictions after the state supreme court struck down his executive order aimed at preventing the virus' spread. (AP)
TRUMP TELLS GOVERNORS FEDS 'WILL STEP IN' IN INF GOVERNMENT DISAGREES WITH STATE REOPENING PLANS
Meanwhile, the Oregon Supreme Court Monday night temporarily blocked a lower court order that would have invalidated all of the state's coronavirus restrictions. A county circuit judge earlier had ruled that Democratic Gov. Kate Brown needed to get the legislature to sign off on her "stay-at-home" order past a 28-day limit. But the state supreme court ruled that the order would stay in place until the tribunal had a chance to fully review the case, which was brought by a group of churches.
Brown slammed the lower court ruling on Monday before the higher court left her restrictions in place, at least temporarily.
"It is irresponsible to dismiss the health risks and science behind our measures to stop COVID-19," she tweeted. "We would be faced with the prospect of another mass outbreak without the tools that have proven to be effective in protecting our families, neighbors & loved ones from this disease."
DEFIANT WHITMER SLAMS ANTI-LOCKDOWN PROTESTS, QUESTIONS POLITICAL MOTIVES BEHIND DEMONSTRATIONS
The looming battle in the Oregon Supreme Court comes as a case is pending before a lower court in Illinois that has the potential to invalidate that state's coronavirus restrictions implemented by Democratic Gov. J.B. Pritzker. A judge who ruled against Pritzker's order as it applied to just one state lawmaker will hear arguments Friday in a case that attempts to undo the order in its entirety, according to the Chicago Sun-Times.
Pritzker, according to the Associated Press, blasted the state lawmaker, Darren Bailey, who was behind the initial successful attempt to invalidate his order -- although on a much smaller scale.
"It’s insulting. It’s dangerous and people’s safety and health have now been put at risk,” Pritzker said. "There may be people who contract coronavirus as a result of what Darren Bailey has done."
Click Photos For VIDEOS 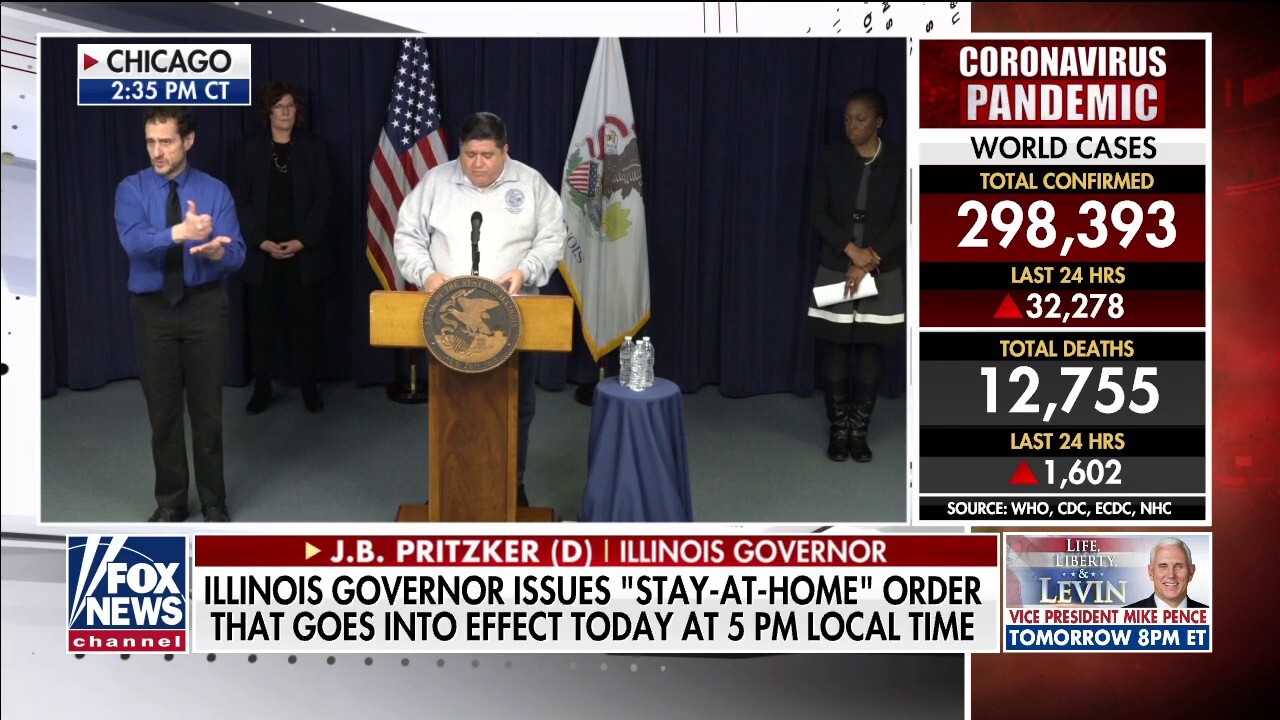 Video
ILLINOIS JUDGE RULES AGAINST GOV. PRITZKER'S STAY-AT-HOME ORDER BROUGHT BY GOP LAWMAKER
Meanwhile, California alone is facing at least a dozen lawsuits that include claims that the state has unjustly closed down gun shops and religious services. Michigan Gov. Gretchen Whitmer is up against a lawsuit from Republicans in her state’s House and Senate over her extension of an already-strict emergency order that has regulated residents’ movement and closed businesses. And Kentucky protesters sued officials including Gov. Andy Beshear, also a Democrat, for allegedly violating the First Amendment by banning mass protests.
A group of Ohio gyms sued Republican Gov. Mike DeWine over his reopening order excluding them from those businesses allowed to operate, but it was subsequently announced that they will be allowed to reopen after all.
The widespread spate of suits shows that with governors taking the lead on the coronavirus crisis -- and the federal government and state legislatures largely in the backseat -- those who disapprove of the nature of the coronavirus lockdowns see the judiciary as their only option for relief from the orders. 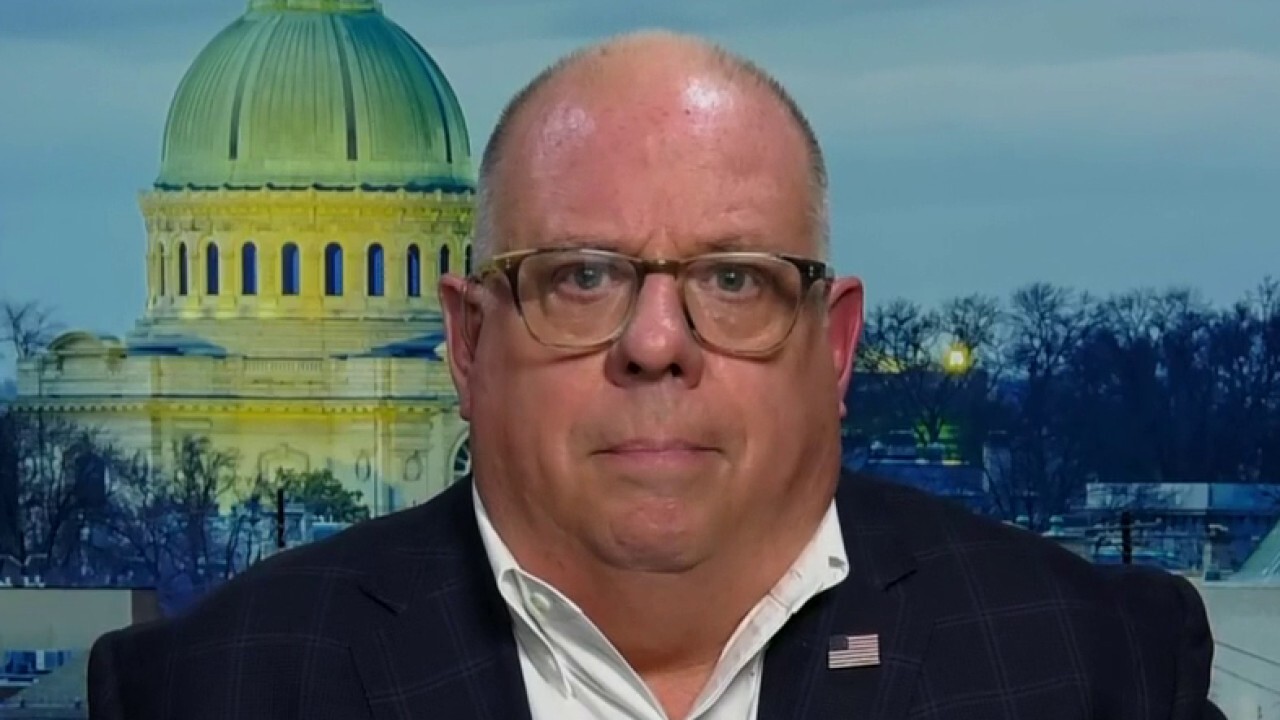 Video
CALIFORNIA OPENS UP CORONAVIRUS FUNDING FOR IMMIGRANTS IN STATE ILLEGALLY, FACES BACKLASH
A lawsuit against Maryland Republican Gov. Larry Hogan by a group of businesses in western Maryland, some former military members, Republican state lawmakers and several religious leaders is pending in the U.S. District Court of Maryland, with the government's most recent filing coming Monday. The initial complaint in the suit said: "Governor Hogan has, respectfully, gone beyond all necessities of the case and continues to invade the domain of Federal authority and our rights secured by the Constitution."
The suit also alleges that Hogan's aides "refused to state Del. [Daniel] Cox would not be arrested for speaking at" a rally against the governor's orders, citing prohibitions against large gatherings.
Governors have had at least some success fending off legal challenges to their coronavirus restrictions. Earlier this month, the U.S. Supreme Court turned back an application asking it to overturn Pennsylvania Gov. Tom Wolf's statewide stay-at-home order. 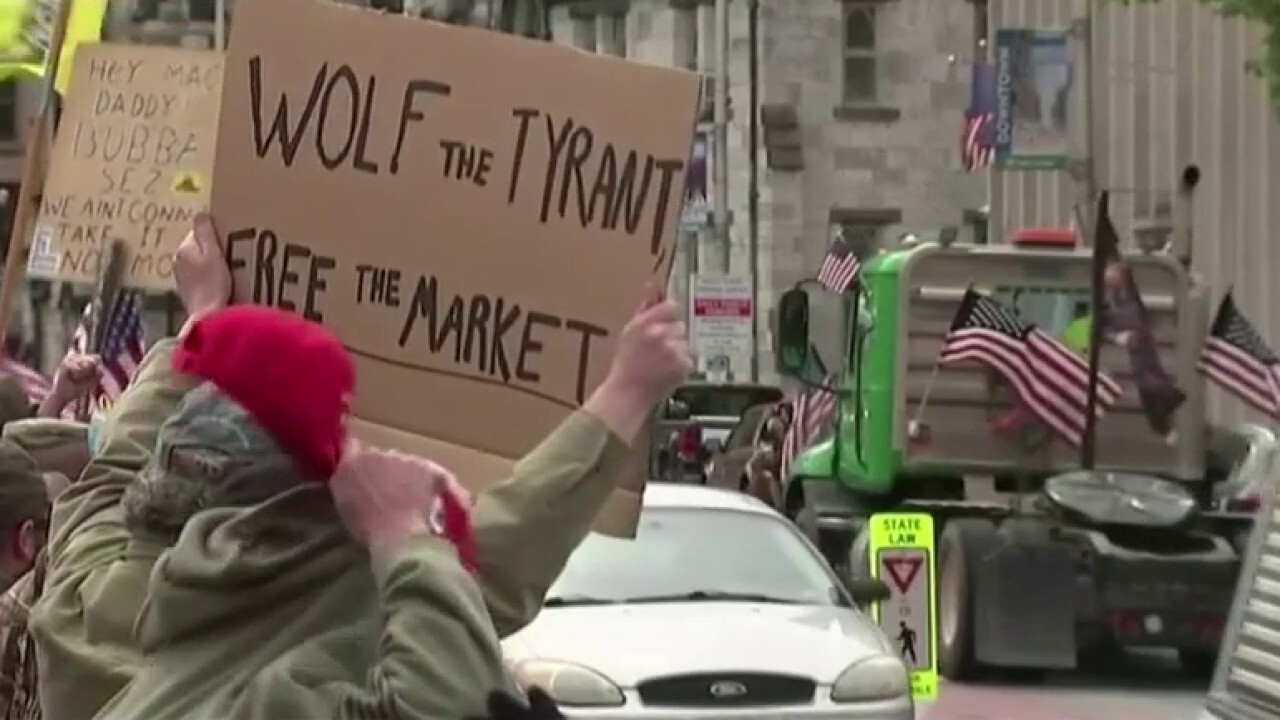 Video
WISCONSIN SAW NO CORONAVIRUS INFECTION-RATE SPIKE AFTER APRIL 7 ELECTION, STUDY SAYS
The Pennsylvania attorney general's office argued in a brief that Wolf has ample legal authority behind his sweeping order.
"Much of what [the plaintiffs] argue amounts to public policy disagreements as to how the governor used his authority," the brief said. "The Pennsylvania Supreme Court applied well-established principles to conclude that the governor had that authority."
Governors indeed have broad emergency police powers meant for situations like the coronavirus pandemic. But that authority varies by state, as was seen in the early stages of the pandemic when different states were forced to go through different processes to put off their elections.
CLICK HERE TO GET THE FOX NEWS APP
Many states were easily able to reschedule voting for the Democratic presidential primary and other local races with just a declaration from the governor or the secretary of state -- or with the collaboration of those two officials. But Ohio required a legislative say in the process, which DeWine ignored, tipping off a messy legal battle in which DeWine openly said he would defy a lower court's order to close the state's polls before the state's supreme court decided to stay out of the fray and let DeWine move forward with his poll closure.
After a similar fight, Wisconsin's election on April 7 controversially went forward over Evers' objections.
Lawsuits over general coronavirus restrictions might take a similar course -- with varying results in each state depending on the authority given to the governor under state law.


Fox News'  Ronn Blitzer, Andrew O'Reilly, Louis Casiano and the Associated Press contributed to this report.
Source>https://www.foxnews.com/politics/oregon-supreme-court-blocks-lower-court-order-invalidating-coronavirus-rules-pending-high-court-review
Posted by theodore miraldi at 10:48 AM