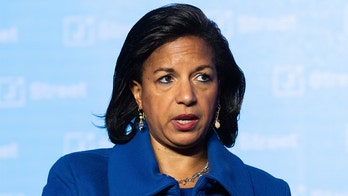 
Former national security advisor Susan Rice Thursday said she "certainly would say yes" if former Vice President Joe Biden asked her to be his running mate in the presidential election.
“I’m humbled and honored to be among the extremely accomplished women who are reportedly being considered in that regard,” Rice told PBS.
Biden is listed on a memo declassified this week by acting Director of National Intelligence Richard Grenell of former Obama administration officials who may have seen documents related to the “unmasking” of former Trump national security adviser Michael Flynn.
While Rice isn’t on the list, she has admitted to making unmasking requests during her time as national security adviser.
All of the officials listed on the memo had the authorization to make unmasking requests -- which is a common practice in intelligence work and numbers in the thousands across administrations, including more than 10,000 by the Trump administration – and being listed on the memo doesn’t necessarily mean they did anything wrong.
DOJ'S FLYNN FILINGS RENEW FOCUS ON MYSTERIOUS SUSAN RICE EMAIL DURING TRANSITION
“The allegation is that somehow the Obama administration officials utilized intelligence for political purposes. That’s absolutely false,” Rice said in a 2017 interview, according to Bloomberg.
Flynn’s name was unmasked after he was intercepted by U.S. intelligence in December 2016 during a phone call with then-Russian Ambassador Sergey Kislyak during the presidential transition period.
Flynn was fired as national security adviser in 2017 and eventually pleaded guilty to lying to the FBI about the phone call. Earlier this month, the Justice Department decided to drop the case against him.
Rice told PBS she wanted to "enable [Biden] to become the next president of the United States in any way I can," but added that she's not necessarily campaigning for the role.
Rice is included among a long list of women Biden is reportedly looking to for a running mate. Sen. Elizabeth Warren, former Rep. Stacey Abrams, Michigan Gov. Gretchen Whitmer and Sen. Kamala Harris are also on the list.
CLICK HERE TO GET THE FOX NEWS APP
Earlier this year, Biden promised to choose a woman for his vice presidential pick.
Source>https://www.foxnews.com/politics/susan-rice-would-say-yes-if-asked-to-be-bidens-running-mate
Posted by theodore miraldi at 10:58 AM