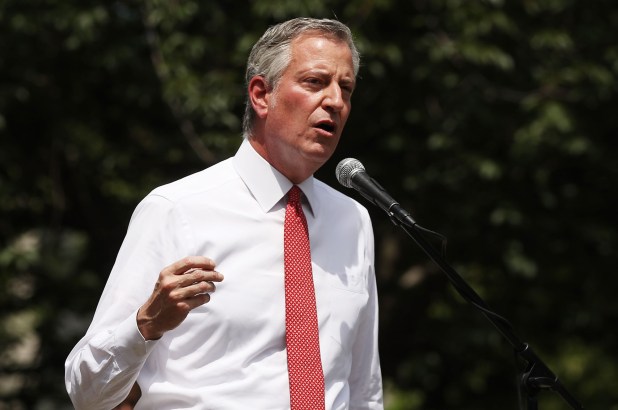 
Mayor Bill de Blasio is planning to install a massive Black Lives Matter mural right outside Trump Tower in Manhattan, The Post has learned.
Plans for the mural — which will be painted in yellow block letters along Fifth Avenue between 56th and 57th streets — come as the city grapples with troubling surges in gun violence and illegal firework activity.
“Obviously he is doing it to antagonize the president,” a source said. “This is what he is concerned about while the city burns. What an amateur politician.”
The source said the mayor’s office reached out to the Department of Transportation about the feasibility of the mural — but it was mentioned that de Blasio wanted it done.
De Blasio hatched the idea a few days after Washington, DC, Mayor Muriel Bowser had “Black Lives Matter” painted along a street leading to the White House, according to a second source. The plan was finalized last week — after locations for the other murals across the five boroughs were announced on Juneteenth, the source said.
The slogan will be stenciled outside Trump Tower, where President Trump stays when he’s in town, sometime before July 4th weekend.
The installation is one of seven that will pop up across all five boroughs. Three are now planned for Manhattan — along Centre Street in Lower Manhattan, Adam Clayton Powell Jr. Boulevard in Harlem and in front of Trump Tower.
Hizzoner’s plan comes as the Big Apple has been rocked by an unprecedented amount of shootings this month — including 53 incidents from June 15 through Sunday, the highest mark for a single week since de Blasio took office.
Residents have also been rattled by incessant firework activity, prompting some fed-up drivers to honk their horns near Gracie Mansion on Monday.
Source>https://nypost.com/2020/06/24/de-blasio-plans-to-install-blm-mural-in-front-of-trump-tower/
Posted by theodore miraldi at 12:00 PM