The Media Are LYING To You About Everything, Including The RIOTS

The Media Lied about the Russia Collusion Hoax, about the Mueller Probe, about Impeachment, about the Coronavirus—and now they’re Lying about the Riots. 
It seems no great event or upheaval in our national life can pass now without the media lying to our faces about it.

In recent days we’ve heard a steady drumbeat of lies, distortions, and disingenuousness from the mainstream media about almost every aspect of the unrest now gripping American cities. The deceit is almost too pervasive and amorphous to describe, but I’m going to try anyway.

Over the weekend we were told, for example, that the looting and violence was being instigated not by left-wing anarchists and antifa groups but by the media’s favorite villains: white supremacists. CNN, whose Atlanta offices were vandalized Friday, went on and on—without a shred of evidence to back it up—about how white supremacists might be infiltrating the protests and stirring up trouble. The New York Times, in a report that even quoted a senior police official in New York City saying outside anarchist groups were coordinating mayhem before the protests began, nevertheless veered into a long aside about how far-right “accelerationists” were hoping the unrest would bring about a long-sought second civil war.

By Monday, no one was talking about the white supremacist agitators anymore. The media had moved on to better, more plausible lies.

Here’s Matthew Yglesias of Vox, disingenuously comparing the rioters and looters to pro-democracy protesters in Hong Kong. His snarky tweet is meant to suggest Arkansas Sen. Tom Cotton is a hypocrite for supporting the Hong Kong protesters but calling for the restoration of order at home. 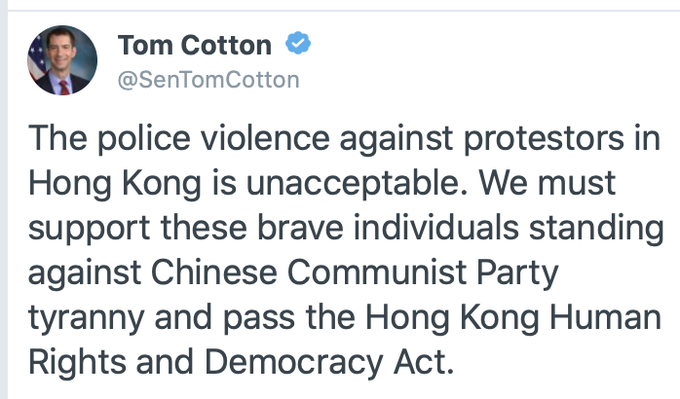 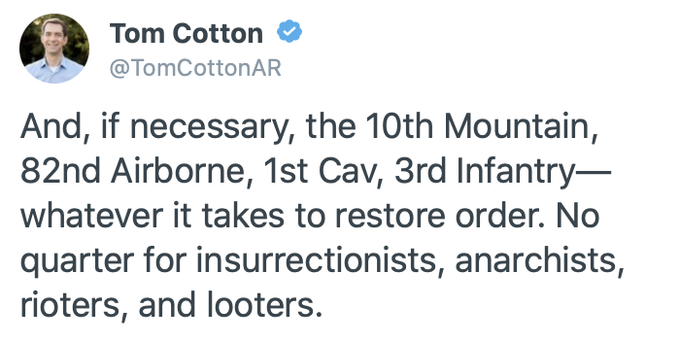 No one should have to point out to Yglesias—or anyone else with a large media platform—that the looters of Minneapolis and the rioters in Philadelphia have nothing in common with the people fighting against an actual communist dictatorship in Hong Kong. Yet here we are.

This kind of disconnect—what can only be described, at best, as a willful misunderstanding of reality—has been disturbingly commonplace among media pundits and reporters since all this began.

Here’s NBC News’s Carl Quintanilla doing the same thing, comparing Trump’s positive comments about the peaceful protests of draconian coronavirus lockdown orders in Michigan on May 1 to his comments on Monday to state governors that they need to make arrests and restore order. 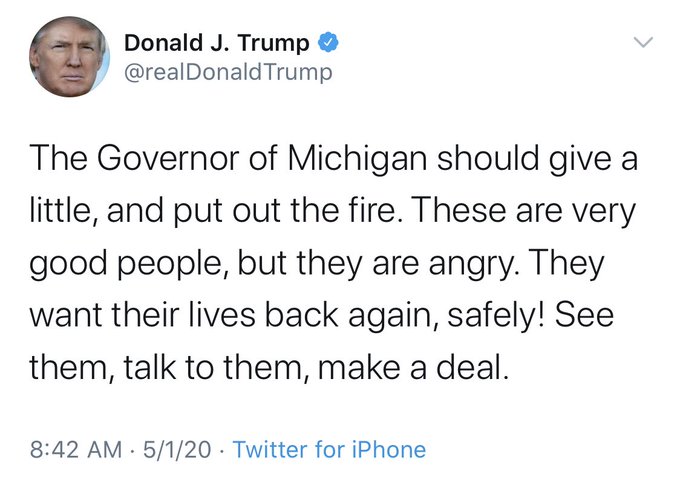 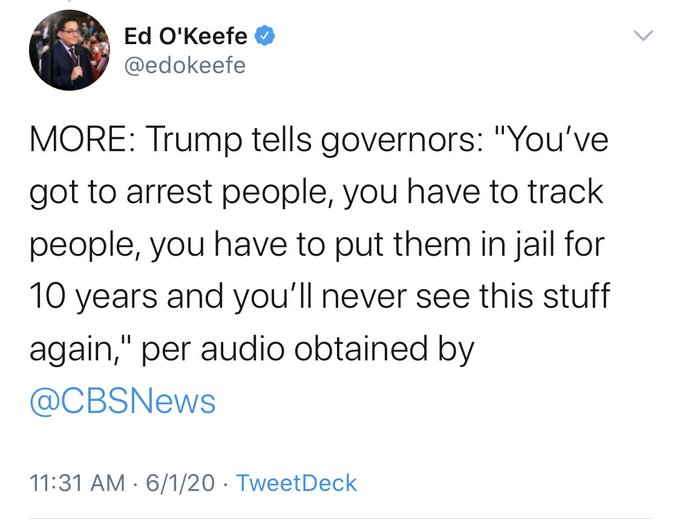 Again, it should go without saying that the Michigan protests last month went off without any looting, rioting, or violence. No one was arrested because no one broke the law. There’s no valid comparison between those Michigan protests and the mass riots over the weekend. Surely Quintanilla knows this, which makes his commentary not just idiotic but deeply dishonest. He doesn’t care about accuracy and genuine insight, he cares about plaudits from woke Twitter—and he got them.

At every turn we see different iterations of media dishonesty. PBS Newshour’s White House correspondent Yamiche Alcindor on Sunday complained that Trump had called the rioters anarchists “without providing any evidence.”

“These people are anarchists,” President Trump says without providing any evidence. https://twitter.com/realdonaldtrump/status/1267187902192193538 …

Get tough Democrat Mayors and Governors. These people are ANARCHISTS. Call in our National Guard NOW. The World is watching and laughing at you and Sleepy Joe. Is this what America wants? NO!!!

Had she opened her eyes, Alcindor might have seen the same evidence Trump and everyone else saw: news footage and cell phone videos circulating on social media of black-clad rioters burning and looting shops, attacking shop owners and motorists, and in some cases spray-painting actual anarchist symbols on public property.

Of course, Alcindor knows full well what the president meant by calling the rioters anarchists. She knows that many of them are indeed anarchists and left-wing provocateurs. We all know it. As mentioned above, the New York Times even reported on it.

Alcindor’s posture here is part of a broader pattern of opposition to Trump that the media has maintained for years, that whatever might be happening in the country, whether a global pandemic or mass rioting, the most important part of the story is always that Trump is behaving badly—that he’s lying, misleading, undermining democratic norms, tweeting mean things, whatever. Nothing, not even nationwide riots, are more important than pushing that narrative.

You see the media’s obsession with this narrative everywhere, no matter what the actual facts of a story might be. In Columbia, South Carolina, a man trying to protect his business was attacked and beaten senseless by an angry mob because he dared to call the cops. Yet Maggie Haberman of the New York Times thinks the big takeaway is that the man was described as “white” in a video of the attack that Trump posted about.

“White general manager” is the description of the person who was attacked in video the president tweeted about https://twitter.com/realdonaldtrump/status/1267656369475399686 …

The Media Are Playing A Dangerous Game


One could go on and on with examples like this. Get on Twitter right now and you’re bound to find fresh examples posting every hour as reporters and pundits lie about events that are unfolding in real time.

Every once in a while, you get a pundit who’s so bad at lying, so unconvincing in his role as a serious newsman, the mask slips. Often, that pundit is CNN’s Don Lemon, a not-very-bright man with a penchant for letting his mask slip—like when he lost it on-air laughing at a stupid joke about how Trump supporters are ignorant rubes.

On Sunday, as American cities were burning and looters were rampaging through the streets, Lemon implored America, “Open your eyes. We are teetering on a dictatorship.” He didn’t mean a dictatorship of the mob, which would have actually made sense given the facts. No, for Lemon and his CNN colleagues the real threat is Trump, who had the audacity to declare that if mayors and governors couldn’t get their cities under control, he would.

“Is the president declaring war on America? What is happening here?” asked Lemon, later declaring that Trump is “playing a very dangerous game, because this will backfire.”

To answer Lemon’s question, what’s happening here is the same thing that’s been happening for years now: the media, not Trump, have declared war on America, they are indeed playing a dangerous game, and it will most certainly backfire.