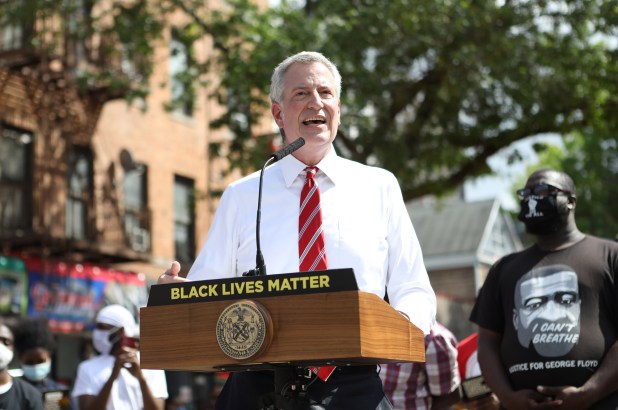 
Every day, evidence mounts that Democratic politicians are delusional by design. They may or may not believe their increasingly absurd versions of unreality, but they are intent on fooling the rest of us until Election Day.
Take New York’s version of Dumb and Dumber, Gov. Cuomo and Mayor de Blasio.
This dimwit duo doesn’t just deny the errors that have made New Yorkers’ lives worse than they needed to be during the pandemic. Like true delusional Dems, Cuomo and de Blasio actually pose as our saviors.
The governor’s shameless vanity poster celebrating his leadership through the pandemic took the cake. It did not mention the more than 32,000 deaths on his watch, nor his disastrous nursing-home policy, and it pretended the virus originated in Europe, rather than China.
Then, on Monday, Captain Corona went on a victory tour of Georgia to pose as the conquering hero and dispense gratuitous advice to the Republican governor. That takes some chutzpah considering New York’s COVID-19 death rate is about six times greater than Georgia’s.
Like I said, delusional.
Back home, there’s no one more delusional than Cuomo’s toxic twin, de Blasio, who has convinced himself he is doing a bang-up job at mayor. Maybe he thinks that if he praises himself often enough, people will believe his delusions of competence.
His most recent boast is that emptying the jails has made the city “safer,” even as the homicide rate blows up around him.
“We now have fewer people in our jails than any time since World War II, and we are safer for it,” he said. Huh? Ask the family of slain 1-year-old Davell Gardner Jr. how safe they feel.
Shootings in the city were up 130 percent last month.
The most difficult Dem Delusion to shake since 2016, of course, is that Hillary Clinton didn’t really lose the election, but was the “victim” of Russian collusion.

“It’s very clear that Russia succeeded,” Clinton told MSNBC’s Joy Reid Monday.
It’s a wonder either of them could keep a straight face. We know now, after the exhaustive Mueller probe, that there was no collusion between President Trump’s campaign and the Russians.
It was all projection by Clinton. The framing and spying on Trump and his campaign began with the discredited Steele Dossier, paid for by Clinton, most likely as a diversion from her own Russia problems including a $500,000 fee paid to her husband for a speech in Moscow.
Any normal person would be embarrassed at being caught out, but Clinton doubles down, confident that if she sticks to her story people will believe there is some truth to it. Delusion is rewarded.
Joe Biden’s delusions are more understandable considering his deteriorating memory.
But his defense of violent anarchists in Portland, Ore., who have laid siege to the city for almost two months, as “peaceful protesters” defies belief.
VIDEO
Biden issued a statement this week attacking Trump for sending federal law-enforcement officers to Portland to protect a courthouse from being burned to the ground.
“They are brutally attacking peaceful protesters,” said Biden, who can’t be watching the news in his basement.
Videos abound every night of his “peaceful protesters” committing arson, looting and vandalism.
“Individuals have thrown bricks, chunks of concrete, glass bottles, feces, balloons filled with paint, pig’s feet, slingshots to hurl ball bearings and batteries at federal agents and the courthouse,” said White House press secretary Kayleigh McEnany.
“These ‘peaceful protesters’ are using lasers to target officers’ eyes, shooting ball bearings with slingshots, using pellet guns and air rifles, launching fireworks at the officers, and barricading police inside a federal courthouse,” said the Trump campaign.
“One officer had his hand impaled on a board with nails driven through it.”
We see with our own eyes the escalating violence and disorder in Democratic-run cities, yet their leaders deny there is a problem.
Instead, Biden blames Trump for “trying to stoke the fires of division” by sending federal officers to lawfully protect federal property.

There's nothing wrong with peacefully kneeling for the national anthem: Sherman

House Speaker Nancy Pelosi maligns these brave public servants as storm troopers “kidnapping” peaceful protesters.
The Democrats own the violence in their cities. They won’t allow police to enforce the law and restore order.
The only law enforcement they are interested in is court action to prevent federal officers from protecting a federal courthouse.
They pretend the protesters in Portland are just peace-loving “Moms,” but among those arrested are hardcore Antifa members and activist lawyers, and anyone engaged in those protests knows full well that they are giving cover to violent criminals.
It took the deaths of two young black men in Seattle’s lawless “CHOP” autonomous zone for Democratic Mayor Jenny Durkan to drop her “Summer of Love” ­delusion.
But she suffered no conse­quences.
Dems don’t care that their cities are blighted by crime, police are injured and citizens live in fear, because all that matters is to create the election-winning delusion that Trump is to blame for the mayhem they have created. It’s short-term pain for long-term gain. They are creating an image for Trump as Captain Chaos, not the law-and-order president he seeks to be.
That is their grandest delusion of all. The gaslighting and straight-out lies required to prop it up is unbelievable. We’ll see in November if they get away with it.

Get off your knees and play

In an ominous sign for the new season, Major League Baseball used its official Twitter account to laud San Francisco Giants players who knelt during the national anthem at an exhibition game.
This is gratuitous virtue-signaling that will turn off fans weary of politics encroaching on every aspect of their lives.
It’s probably more of an indication that the Giants’ rookie manager, Gabe Kapler, whose track record is not exactly stellar, is floundering and trying to make a name for himself.
But Americans are suffering enough from the pandemic and the uncertain economy. For everyone’s mental health, sports must be an oasis of unity and free of politics.
And don’t pretend kneeling during “The Star-Spangled Banner” is not politics.
It’s divisive and will do to MLB what Colin Kaepernick did to football, when the NFL lost at least 10 percent of its TV viewers, who objected to being moralized at by overpaid sportsmen.
Play ball and only ball.
Source>https://nypost.com/2020/07/22/democratic-politicians-are-full-of-delusion-devine/
Posted by theodore miraldi at 12:00 PM