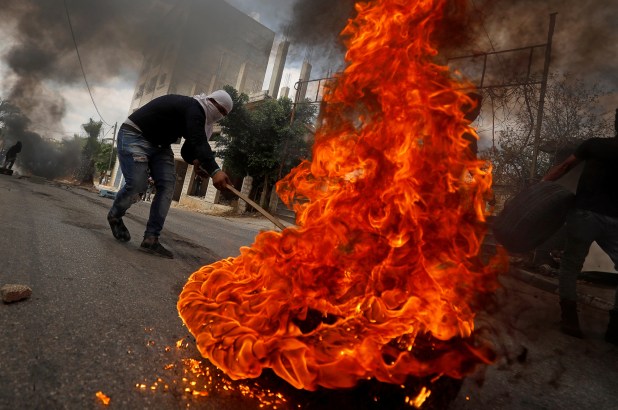 A demonstrator moves a burning tire during an anti-Israel protest following the funeral of a Palestinian man. REUTERS


Does one more diatribe against Israel published by The New York Times matter?
In recent years, the Times has had an open-door policy for those who oppose not just the policies of the Israeli government but also the whole idea of a Jewish state. So the publication last week of a piece by Atlantic columnist Peter Beinart explaining “Why I No Longer Believe in a Jewish State” — and opting for a single nation of both Arabs and Jews, instead of a two-state solution — didn’t really break new ground.
What’s important, though, about Beinart’s decision to switch from self-proclaimed liberal Zionist critic of Prime Minister Benjamin Netanyahu to advocate for, in effect, dismantling Israel is that support for his article isn’t confined to the usual far-left suspects who oppose the Jewish state’s existence.
Key Democratic foreign-policy operatives like Obama Deputy National Security Adviser Ben Rhodes and former Clinton and Obama State Department official Robert Malley tweeted their support for Beinart’s bravery and thoughtfulness as well as the importance of the discussion he’s trying to initiate.
Rhodes and Malley are typical of the sort of people who may well be in control of US foreign policy come January if former Vice President Joe Biden wins the presidency. If they think the unimaginable prospect of a 72-year-old vibrant and successful nation surrendering and allowing itself to be transformed into a “binational” entity rather than the sole Jewish state on the planet is worth discussing, then something ominous is percolating inside the liberal foreign-policy establishment that will be handed the reins of government if President Trump loses in November.
In recent months, Biden and his top foreign-policy adviser, Antony Blinken, have reassured Jewish supporters that the anti-Israel radicals of the “Squad” like Ilhan Omar and Rashida Tlaib will be shut out in the next Democratic administration. But the cheers for Beinart’s screed came not just from the likes of anti-Semites like Omar, Tlaib and Linda Sarsour but also from liberal policy wonks. That illustrates the way the idea that Israel can or should be dismembered may have more support than Jewish Democrats think.
Beinart’s 2012 book “The Crisis of Zionism” was widely dismissed for its one-sided look at the conflict with the Palestinians. In it, Beinart — like other Israel-bashers — rationalizes and pooh-poohs a century of Arab rejection of all compromises, including several offers of an independent Palestinian state alongside Israel.
While most Israelis support the idea of a two-state solution in principle, they understand it’s off the table for the foreseeable future because Palestinians still foolishly cling to their dream of turning back the clock to 1948 and erasing Israel’s existence.
The status quo, in which the Palestinian Authority rules most of the West Bank autonomously while Israel retains security control, isn’t ideal. But the overwhelming majority of Israelis understand that it’s preferable to the alternative of having Israel surrender control and allowing the disputed territory to become a larger version of Gaza, where a 2005 withdrawal led to the creation of a Hamas terrorist state.
Disillusioned because his advice was not heeded, Beinart now says Israel must decide between being a binational state or a pariah apartheid state. That’s a false choice, and his proposed alternative is a dangerous fantasy.
Reasonable people know that if a Jewish state were replaced with Beinart’s one-state proposal, the result would be chaos and slaughter, since there’d be no army dedicated to protecting Jews (and others), who might eventually be outnumbered by Palestinian Arabs even if the new state were run democratically (a big “if”).
The sacrifice, blood, guts and brains of millions of courageous Jews created and sustained Israel. The idea that their state should be trashed now because Palestinians don’t accept it or because it doesn’t measure up to the hopes of one presumptuous intellectual is so silly only an editor at the Times would fall for it.
Israelis and American supporters of the Jewish state are understandably dismissing Beinart as an ignorant poseur. But they should be concerned about the way his idea is considered worth debating not just by radicals but also by some establishment types who may soon be running things in Washington.
Biden’s promises notwithstanding, Beinart’s hit-job is one more indication that the shift away from a position of strong support for Israel among Democrats that became apparent during the Obama administration may be accelerating.
Source>https://nypost.com/2020/07/13/democrats-turn-toward-a-solution-that-means-the-end-of-israel/
Posted by theodore miraldi at 2:14 PM