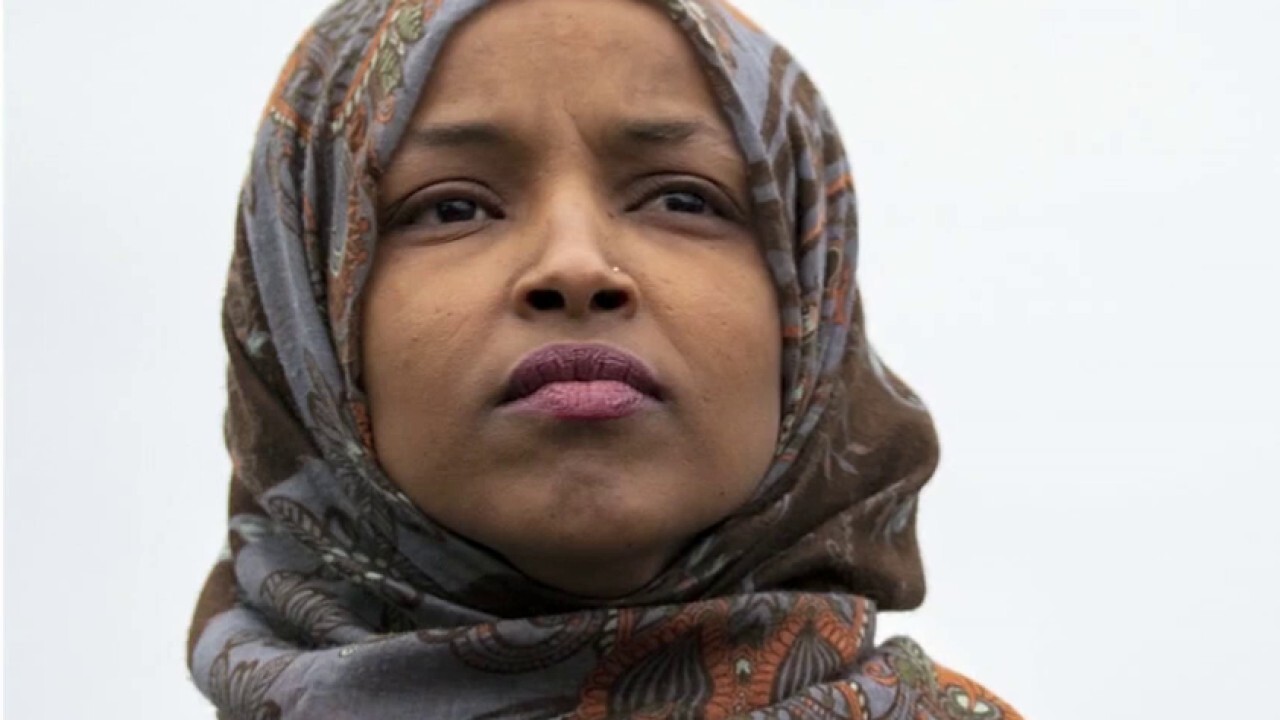 **Omar was born in Mogadishu, Somalia on October 4, 1982, and spent her early years in Baidoa, Somalia. ... She and her family fled Somalia to escape the war and spent four years in a Dadaab refugee camp in Garissa County, Kenya, near the Somali border.
Ilhan Omar - Wikipedia


EXCLUSIVE: A resolution introduced Thursday by House Republicans condemns allegedly “anti-American” statements by Rep. Ilhan Omar, D-Minn., after remarks in which she called for supporters to begin “dismantling the whole system of oppression.”
The resolution, introduced by Rep. Andy Biggs, R-Ariz. – and co-sponsored by Reps. Scott Perry, R-Pa., Scott DesJarlais, R-Tenn., Andy Harris, R-Md., Chip Roy, R-Texas, Ted Budd, R-N.C., Ralph Norman, R-S.C., Jeff Duncan, R-S.C., and Debbie Lesko, R-Ariz. – accuses Omar of having “a documented history of expressing anti-American sentiments.”
ILHAN OMAR CALLS FOR DISMANTLING AMERICA'S 'SYSTEM OF OPPRESSION'
Resolution condemning state... by Fox News on Scribd
It also accuses her of advocating “for a Marxist form of government that is incompatible with the principles laid out in the founding documents of the United States.”
The resolution is in response to remarks made by Omar earlier this month in which she said: “We are not merely fighting to tear down the systems of oppression in the criminal justice system. We are fighting to tear down systems of oppression that exist in housing, in education, in health care, in employment, in the air we breathe.”
“As long as our economy and political systems prioritize profit without considering who is profiting, who is being shut out, we will perpetuate this inequality,” she said. “We cannot stop at the criminal justice system, we must begin the work of dismantling the whole system of oppression wherever we find it.”
Asked about the resolution, Omar's office called the claims a "false smear" and forwarded a Washington Post op-ed in which Omar described receiving death threats because of the Republican response to her comments.
In it, she says the Republican National Committee and conservative media amplified the remarks and falsely accused her of wanting the abolish the entire U.S. economy and government.
"My congressional office and social media feeds were instantly flooded with hate speech, calls for deportation and, as is so often the case, death threats," she wrote.
Omar, who is part of the “Squad” of left-wing freshman congresswomen, has a history of controversial remarks.
Opposing "oppression" is not controversial, but GOP critics argued she was suggesting a broad-scale overhaul of the country as a whole.

Video
The resolution, noting that Marxist governments that have centrally planned economies “experience unparalleled oppression and brutality,” accuses Omar and others of “calling for the dismantling of this system of government and supplanting it with a Marxist form of government” and violating their oath to support and defend the Constitution.
The comments by Omar were also criticized in the Senate, where Sen. Marsha Blackburn, R-Tenn., said Omar  "took an oath to defend and protect the Constitution, not shred it,"
OMAR DEFENDS CALL TO DISMANTLE MINNEAPOLIS POLICE DEPARTMENT, CALLING IT 'ROTTEN TO THE ROOT'
"Omar and her Marxist comrades are a threat to our democracy. Omar should resign," Blackburn said.
Meanwhile, President Trump’s son Donald Trump Jr. asked if presumptive Democratic nominee Joe Biden agreed with Omar’s proposition.
“Does @joebiden agree with his supporter @ilhanmn that we need to dismantle the United States economy and political system?” Trump Jr. tweeted.
“Does our education system know it has failed you?” Omar shot back. “Your level of comprehension is such an embarrassment to our country, maybe someone can offer you free English classes.”
Fox News’ Morgan Phillips contributed to this report.
Source>https://www.foxnews.com/politics/house-gop-resolution-accuses-ilhan-omar-of-anti-american-remarks-marxist-policies
Posted by theodore miraldi at 3:41 PM