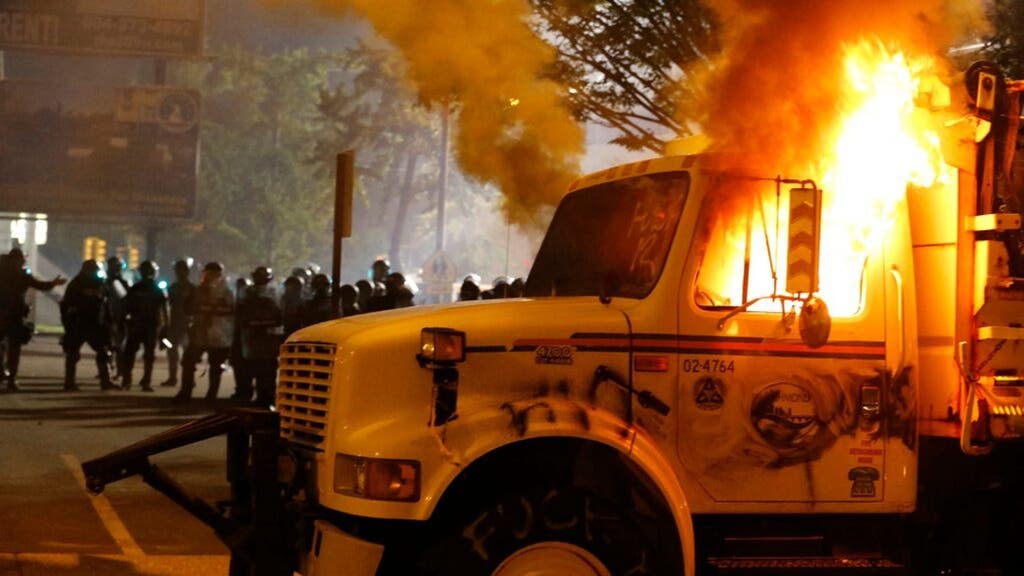 A Virginia newspaper called out local leaders on Monday after a weekend of rioting and lawlessness in Richmond, asking: "When will they say “enough?”
The Richmond Times-Dispatch criticized local officials in an editorial published on Monday titled, “Where is the Leadership?”
The editorial asked when will the violence stop.
“What is the end game to these protests? The violence seems to escalate daily, not just in Virginia’s capital city but across the country,” it said, adding that “the absence of leadership at all levels of government has compounded these circumstances.”
“We’ve normalized too many behaviors that make Richmond — and the United States — a less safe and prosperous place to live,” the editorial continued.
Police stand in front of a utility vehicle that was set on fire by protesters during a demonstration outside the Richmond Police Department headquarters on Grace Street in Richmond, Va., Saturday, July 25, 2020. Police deployed flash-bangs and pepper spray to disperse the crowd after the city utility vehicle was set on fire.  (Joe Mahoney/Richmond Times-Dispatch via AP)
The editorial was published after another weekend of violence exploded in more than half a dozen U.S. cities Saturday night -- with the mayhem including damage to federal buildings, local police precincts, and a fatal shooting in Austin, Texas.
In Richmond, Va., fires were set, windows were smashed and more than a dozen people were arrested over the weekend, police Chief Gerald Smith said during a news conference on Monday. The damage included smashed windows at the police department for Virginia Commonwealth University (VCU), Smith added.
“Individuals are desecrating property and being absolved of any wrongdoing,” The Richmond Times-Dispatch editorial said. “Banks and businesses are boarded up and, locally, a critical public economic engine — VCU — incurred $100,000 in damage to its Monroe Park campus in a matter of hours.”
Police and protesters square off outside the Richmond Police Department headquarters on Grace Street in Richmond, Va., Saturday, July 25, 2020. (Joe Mahoney/Richmond Times-Dispatch via AP)
The editorial outlined a timeline of the violence that took place on Saturday night, pointing out that the Richmond police headquarters was targeted.
“During the attack on the police station, multiple fires were set in dumpsters and a city dump truck was set ablaze,” the editorial said. “Both police officers and firemen were assaulted with batteries, fireworks, hunks of asphalt, water bottles and other objects.”
Smith said that his department saw a flyer calling for demonstrations Sunday that carried the same tone of “intimidation” that flyers for Saturday night’s protests had contained.
SEATTLE POLICE DECLARE RIOT AFTER PROTESTERS SET FIRE TO CONSTRUCTION SITE
According to Smith, Richmond police is working on identifying any groups that were affiliated with the violent demonstrations, adding that some individuals from Saturday night have been identified as being from both left-wing and right-wing movements.
Protests and violent demonstrations have been seen across the country following the death of George Floyd, a Black man in Minnesota who died while in police custody. A video of the May 25, 2020, encounter with police officers showed a White officer putting his knee on Floyd's neck for more than 8 minutes.
The demonstrations in Richmond, which were called “Richmond Stands with Portland,” was planned for days in an apparent reaction to ongoing tensions between protesters and federal agents at the U.S. courthouse in Portland, according to news outlets.
The editorial noted that “Saturday night’s violence was a planned riot.”
“There already have been deaths nationally; we fear there could be more,” the editorial said.
The editorial referenced elected officials including Richmond Mayor Levar Stoney, Virginia Gov. Ralph Northam, Richmond City Council members, the Virginia General Assembly and the White House, saying the “public still is looking to” them “for a way forward,” adding that “the solution won’t be found in a press conference, a tweet or staying silent.”
The piece went on to ask, “When will Stoney and City Council members acknowledge that putting down riots to protect lives and property is a very real function of their elected positions?”
“Keeping mum and refusing to take action in fear of making tough decisions is not governing. It is cowardice,” it continued. “Enough is enough. Show some leadership.”
Fox News’ Dom Calicchio and The Associated Press contributed to this report.
Source>https://www.foxnews.com/media/virginia-newspaper-calls-out-local-leaders-riots
Posted by theodore miraldi at 11:31 AM