Why are LIBERALS Siding with Portland’s Violent ANARCHISTS Against Law-Abiding FEDS? 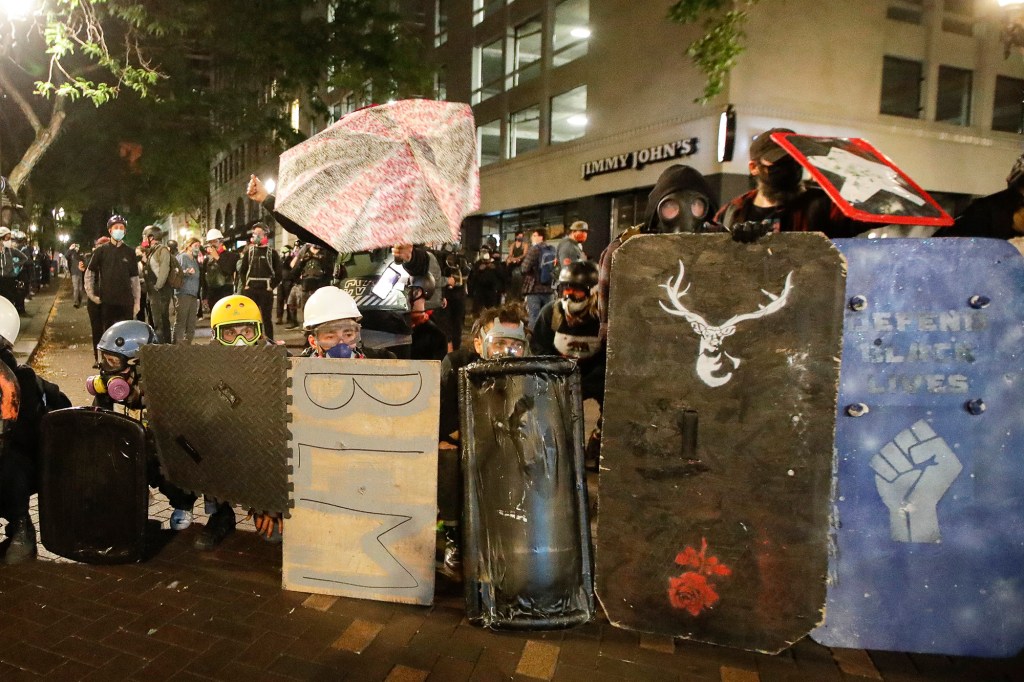 
Despite the occasional looting, chaos, property damage, trespassing, rioting, graffiti, assaults, arson and general mayhem, the media consistently assure us that antifa “protesters” are “largely peaceful.” And since the majority of buildings in Portland, Seattle and Denver haven’t been looted yet, who am I to argue?
Of course, it takes only a sliver of the population to transform downtowns into a mess and create quality-of-life issues for thousands of law-abiding citizens. And the mayors who surrender parts of their cities to left-wing “protesters” are tacitly endorsing lawlessness themselves.
There’s little doubt that if alt-right activists had occupied a few city blocks in Seattle or tried to firebomb a federal courthouse in Portland, we’d be in for feverish wall-to-wall media coverage, engulfed in a national conversation about the perils of right-wing radicalism. Every elected Republican would be asked to personally denounce the extremists to make sure they take implicit ownership of the problem.
When a few hundred angry tiki-torch-carrying Nazis marched in Charlottesville, you’d have thought the RNC deployed the Wehrmacht. Those who led the riot were even asked to opine on CNN.
On the other hand, left-wing rioters — the people Chris Cuomo and other journalists compared to GIs landing on Normandy — are immediately transformed into apolitical actors, rogue “anarchists,” as soon as any violence starts.
Perhaps the majority of citizens and businesses in Portland, Seattle and Denver want their elected officials to let antifa act with impunity. Or maybe some will begin fleeing those cities. Whatever the case, it’s a local concern.
To a point. If mayors do nothing to stop anarchists from tearing down federal monuments or from defacing, vandalizing and attempting to burn down federal buildings, the feds have every right to dispatch agents to restore order.
None of which is to deny that there are legitimate concerns about how law enforcement is conducting itself. I’m sympathetic to criticisms of the federal officers who operate in camouflage and in unmarked vans. Cops should display badge numbers and identification — if they truly aren’t doing so right now — otherwise civilians have no real way to hold those in authority accountable.
But the claim that Pinochet-like secret police have begun snatching Portland protesters off the street and making them disappear amounts to the arrest of one man, who refused to speak without his lawyer and was released a little more than an hour later without any charges.
If it were up to me, I’d leave Portland to the anarchists and their political accomplices. But federal law enforcement — agencies such as the DEA, FBI, ICE, ATF, Department of Homeland Security and US Marshals Service — regularly operate across the country. Sometimes they make arrests, and sometimes they do so after going undercover.

Portland protests have no goal except violence and anarchy

This happens under every administration, every day, and it often happens for far less compelling reasons. As far as we know, cops haven’t broken any laws in the streets of Portland. The protesters who cover their faces have broken tons.
With this in mind, it’s been instructive watching many of the same characters who cheer on governors who take undemocratic emergency powers and shut down houses of worship without the consent of the people — and who sometimes arrest Americans for playing Wiffle ball, attending church or cutting hair — act as if policing portends the end of democracy. The same people who incessantly clamor to empower the federal government when it suits their purposes now act as if protecting a federal courthouse is the Reichstag Fire.
MSNBC’s John Heilemann says that Trump’s sending federal police into Portland is a “trial run” for using “force” to “steal this election.” In a piece titled “Trump’s Occupation of American Cities Has Begun,” Michelle Goldberg, somehow still allowed to freely opine at The New York Times, says that “fascism” is already here. House Speaker Nancy Pelosi calls the police “stormtroopers” who are “kidnapping protesters.”
All of these contentions are ugly conspiracy theories, hyperbolic allegations meant to fuel partisan paranoia before an election. Even if we accept the criticisms of law enforcement, the driving problem is that mayors are allowing “protesters” to trample on public and private property. They allow it because they share the same left-wing sensibilities. But protesting should never be a license for anarchy.
Source>https://nypost.com/2020/07/24/why-are-liberals-siding-with-portlands-violent-anarchists-against-law-abiding-feds/
Posted by theodore miraldi at 10:10 AM