Biden Clears a LOW BAR, But Now He Can’t Go Back Into HIDING 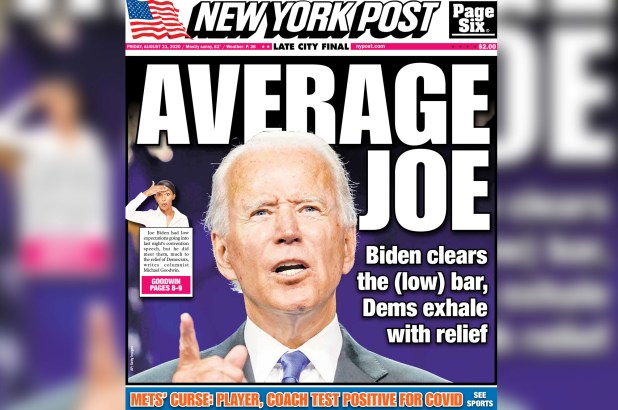 
He did it. Joe Biden got through the biggest speech of his life cleanly and coherently, without stumbling or mumbling or getting that far-away dazed look in his eyes.
That sounds like an incredibly low bar because it is, but it reflects the honest and serious debate about Biden’s fitness. His age, 77, past health problems and the obvious signs that his faculties have been diminished raised the unprecedented possibility that he would not be able to carry out one of the routine performances of a major party nominee — give an acceptance speech.
Coming into his party’s virtual coronation, the test was not whether he would give a good speech or a bad speech. It was whether he could give a speech at all.
So congratulations to Biden for clearing a fundamental hurdle. Now the bar is raised and he should be treated as any other candidate. He can start by releasing his health and medical reports, which he has so far refused to do.
Most importantly, there is no excuse for him to hide any longer in his basement. Hidin’ Biden must be a thing of history.
He must come out into the sunshine and, while protecting himself from COVID-19, get on the campaign trail and take his claim to the presidency to the people of America.
If he can’t or won’t, how can he possibly be president? Would he isolate himself in the Oval Office?
The enormous promises he made about defeating the killer virus, creating jobs, combating climate change, “removing the stain of racism” and uniting the nation will mean nothing if he continues to shrink from public view.

So too his accusation that President Trump’s performance on COVID-19 has been “unforgivable” and that giving the incumbent four more years would let him continue to “fan the flames of hate and division.”
Those claims must be challenged if voters are to be informed. Yet Biden has so far refused to sit for interviews, making a major break with every other presidential campaign in modern times.
The talk that the Democrat would even skip the three fall debates, promoted by some of his supporters, is similarly unacceptable.
Joe Biden has broken the protective shell and he can’t now wrap himself in it again. Ever.
As for the actual content of the speech, it was more pedestrian than soaring, and the ideas were presented in simple, stark contrasts. Light vs. dark, hope vs. fear, almost always in short sentences.
Two notable points: He did not explicitly promise the huge, socialist-leaning items the left is demanding, though that hardly means the issues are settled. The aim from the Bernie Sanders wing is clearly to help Biden get elected, then move him to the far left.
Also missing was any mention of the violence convulsing the nation’s cities. These are no longer protests over George Floyd.
These are anarchists in Seattle and Portland and elsewhere attacking the police and the courts in direct assaults on society.
In addition, common criminals have stepped into the void left by police forces that have been handcuffed and abandoned by Democratic mayors and governors. This is a major urban crisis that neither Biden nor anyone else over four nights said a single word about.
That is shameful and a major opening for the Trump campaign.
Otherwise, the fourth night was like every other night. With a sneering Hollywood leftist presiding, Julia Louis-Dreyfus this time, the Dems effortlessly cemented their reputation for being a bunch of coastal elitists talking down to voters.

Louis-Dreyfus kept intentionally mispronouncing Vice President Mike Pence’s name as “punce,” as if this would be clever to Middle America.
As in the first three nights, the aim was to paint Trump as the devil and Biden as a saint. We heard so many stories about Biden’s family tragedies and his empathy for others in grief that it often seemed as if he is running to be the consoler-in-chief.
No doubt the pandemic has something to do with that decision, but the relentless repetition made it feel as if the audience was being force-fed a created image as part of a political narrative rather than a true biographical sketch.
Part of that image involved injecting faith into the proceedings, with Sen. Chris Coons giving a semi-sermon on Biden as a devout Catholic. He promised the nominee would be a “servant leader” and, quoting the Book of Micah, insisted that the nominee “knows we are called to do justice, love mercy and walk humbly with our God.”
When Republicans have invoked faith as a presidential trait, the secular left always goes crazy, claiming it’s a threat to the separation of church and state. It’s either progress or hypocrisy that there will be no such accusation against the Dems.
I vote for hypocrisy.
Source>https://nypost.com/2020/08/21/biden-clears-a-low-bar-but-now-he-cant-go-back-into-hiding-goodwin/
Posted by theodore miraldi at 10:20 AM