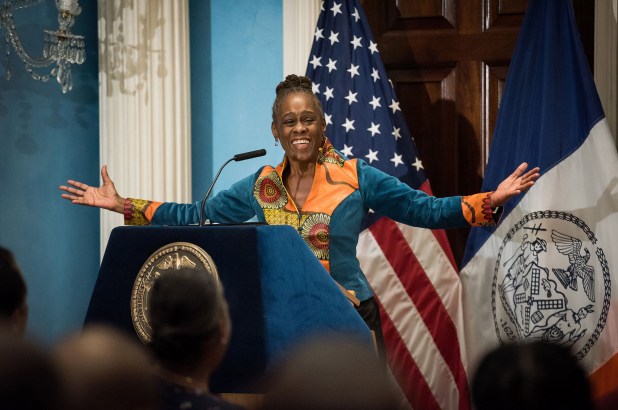 Nearly a third of New Yorkers may be out of work thanks to the pandemic and lockdowns, but first lady Chirlane McCray’s staff is … thriving. And Mayor Bill de Blasio’s excuse for it is beyond laughable.
Fourteen city workers assisting McCray cost taxpayers $2 million a year — most of it buried in the payrolls of various city agencies until former Post reporter Yoav Gonen pulled together the details for online “paper” The City.
Oh, and her staff is twice the size it was in 2018, further evidence that the mayor is using city resources to set his wife up to win next year’s race for Brooklyn borough president.

“This work is about the needs of the people of this city especially in this crisis,” de Blasio said this week, pointing to her running of his “racial equity” task force as well as (he’s so shameless) the universally criticized ThriveNYC mental health debacle.
Yet many staffers plainly aren’t doing crisis work. One is a $70,000-a-year videographer (paid via the Health Department!) who recorded the first lady baking cookies during the pandemic.
Another is a $143,000-a-year PR director — whose job, by definition, is to boost her image, not to serve the public. Same for her $65,000 “associate director of advance.”
VIDEO
Taxpayers may get some value from others on her staff, like the special assistant from the mayor’s office who makes $115,000, and the $130,000 “executive program specialist” from the Department of Social Services — after all, someone has to actually supervise the programs that McCray is nominally in charge of.
Another sign of corruption: The mayor imposed a hiring freeze early this year — but McCray still got to bring on a new $150,000-a-year senior adviser in April, who somehow got classified as an essential worker.
Essential to the first family’s hopes of continued taxpayer support after term limits forces the mayor out of office, maybe. This naked abuse of his public trust puts the lie to all de Blasio’s endless moral sanctimony.
Source>https://nypost.com/2020/08/20/bill-de-blasios-pathetic-excuses-for-his-wifes-2-million-a-year-staff/
Posted by theodore miraldi at 10:53 AM