“He was a f–king Nazi. Our community held its own and took out the trash.” 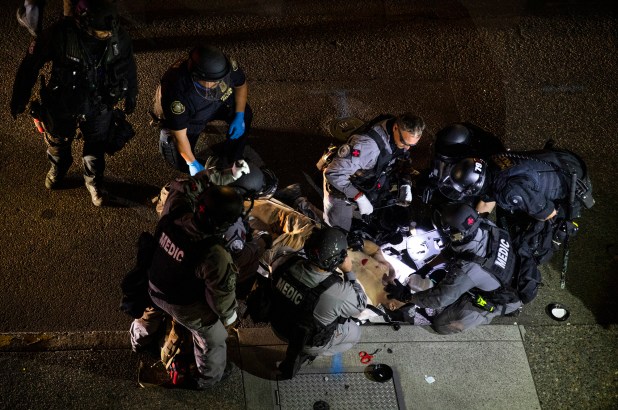 
It’s spine-chilling to hear activists in Portland cheering about the cold-blooded murder of a Trump supporter Saturday night.
“I am not sad that a f–king fascist died tonight,” a woman shouts into a megaphone at a BLM-Antifa gathering after a man was shot dead nearby.
“He was a f–king Nazi. Our community held its own and took out the trash.”
Videos posted by independent journalists Andy Ngo and Ian Miles Cheong show an American flag being burned in celebration as the crowd revels in the news.
Online video appears to show the murder. You can hear a man’s voice: “We got a couple right here.” And then two shots ring out.
The victim, identified as Aaron Danielson, reportedly was wearing the cap of conservative-libertarian group Patriot Prayer, whose caravan of pickup trucks festooned with flags drove through the city that day.
But because he was a supporter of President Trump, the victim did not deserve to live, according to BLM-Antifa.


Such callous disregard for certain human lives is a hallmark of the violent protests that have been sanctioned in Democrat-run cities by weak mayors such as Portland’s Ted Wheeler.
Wheeler doesn’t seem to understand that the more he appeases the mob, the more they demand. These are not peaceful protests. They are organized anti-police riots, marked by arson and property destruction. Yet Wheeler never says a word of criticism for the thugs. He only tries to find ways of satisfying their absurd demands.
After presiding over three months of riots, Wheeler called a press conference Sunday, at which he touted his 19-point program to emasculate the police.
Instead of expressing condolences to the family of the dead man, vowing that the perpetrators would be brought to justice or saying he would finally accept a standing offer of help from President Trump, Wheeler chose to make a political campaign speech attacking Trump: “Now you want me to stop the violence that you helped create. What America needs is for you to be stopped.”
Wheeler must have received the panicked memo from Biden campaign HQ after polls in swing states started moving toward the president over law-and-order fears in Middle America.
The Republican convention last week successfully pinned the riots in Democrat-run cities on Joe Biden and his supporters.
When Vice President Mike Pence spoke out in defense of police and warned “you won’t be safe in Joe Biden’s America,” Fox News pollster Lee Carter said independents loved the message, and he scored it a B.
How the Democrats didn’t see the backlash coming illustrates just what a bubble they are in.
Now, after mentioning not one word about violence in their cities at the Democratic convention, they acknowledge it by trying to blame Trump.
Biden issued a statement Sunday, saying “we must not become a country that accepts the killing of fellow Americans who do not agree with you.”
He should direct that comment at the BLM-Antifa ghouls celebrating the Portland murder victim’s death.
“What does President Trump think will happen when he continues to insist on fanning the flames of hate and division in our society and using the politics of fear to whip up his supporters,” said Biden.
But it is not Trump who has been inciting violent riots and disempowering police, it is Democrats.
As polls in June showed Biden was picking up the support of young people amid anti-police protests, Sen. Kamala Harris, whom he later selected as his running mate, was gleeful when she told “Late Show” host Stephen Colbert that protesters “are not going to stop before Election Day … and they should not.”
Now that the tide has turned, Biden has been vigorously slamming the rioting.
“I condemn this violence unequivocally,” he said Sunday.
But he is too frightened to condemn the people committing it — the BLM-Antifa thugs who are the militant wing of the Bernie Bros he inherited and whose votes he needs to win in November.
Instead of going along with their nihilistic attitude to law and order, why doesn’t he tell his party to stop rushing to judgment against the police every time a black man is shot?
For instance, Jacob Blake was shot seven times in the back by Kenosha police last weekend and may be paralyzed. After a week of rioting that culminated in the deaths of two protesters at the hands of a 17-year-old vigilante they were trying to attack, more facts have emerged.
Blake was armed with a knife, according to the Kenosha Professional Police Association, resisted arrest, and had placed one officer in a headlock. The police had been called by a woman who said he had violated a restraining order related to an earlier sexual assault at the home of his alleged victim.
Your moral compass is awry if this person is a hero.
The courts will determine if the police used excessive force, but we have seen police shot before when an offender is allowed to reach inside his car for a weapon. Once you resist arrest and start fighting police, you are entering uncharted territory.
The unspoken demand of anti-police protests this summer is that cops not arrest anyone who resists. That will be the end of policing.
Democrats must be honest about what their pandering to BLM and Antifa means. The ultimate endpoint of demonizing cops and valorizing violent offenders who resist arrest is there is no law and order.
Source>https://nypost.com/2020/08/30/blm-activists-celebrated-as-trump-supporter-killed-devine/
Posted by theodore miraldi at 5:32 PM