Police and private security forces raided the headquarters on June 29 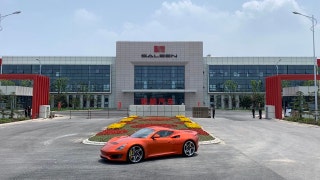 China enticed an American entrepreneur with the opportunity of helping build a cutting-edge automobile company in the world’s largest car market, then used the uncertainty cast by COVID-19 to steal his intellectual property, the businessman says.
Steve Saleen, founder of specialty high-performance sports car manufacturer Saleen Automotive, and his partner Charles Wang, a Chinese immigrant and former attorney at a New York law firm, were approached in late 2015 about forming a joint venture with the city of Rugao to manufacture automobiles.
The deal “offered, I thought, from my standpoint, a great opportunity to help build a global company,” Saleen told FOX Business.
The agreement that was reached called for Saleen to contribute his brand and trademarks, designs for three engineered vehicles and experience, know-how and technology in manufacturing automobiles, he said. Those contributions were valued at $800 million.
Wang, who helped structure the deal, would serve as the company’s chief executive officer.
$1.6T IN CENTURY-OLD CHINESE BONDS OFFER TRUMP UNIQUE LEVERAGE AGAINST BEIJING
For their efforts, Saleen, Wang and their partners would receive two-thirds ownership of the newly formed company called Jiangsu Saleen Automotive Technologies.
The city of Rugao’s government, which owned the remaining third, was responsible for providing $500 million of capital and $600 million in subsidized loans over three years to fund the operations and build a manufacturing facility. Rugao, located on China’s Eastern seaboard in Jiangsu province, is about 125 miles north of Shanghai.
“It sounded like a great deal to us, so we went along with them,” Wang said, adding that his experience enabled him to set up the company’s corporate governance and articles of incorporation in accordance with Chinese law.
By early 2020, everything was going according to plan. The initial product, an SUV, was in certification and the employee headcount had swelled from three to nearly 1,000. The factory, armed with 470 state-of-the-art robots, was ready for production.
Then the COVID-19 pandemic struck.
With both Saleen and Wang stuck in the U.S. as flights to China were grounded, the Rugao government seized on an opportunity to “nationalize the company,” according to Saleen.
US WILL PAY FOR COMPANIES TO BRING SUPPLY CHAINS HOME FROM CHINA: KUDLOW
On June 29, the city sent six police cars with sirens blaring and vans full of private security forces to raid Jiangsu Saleen’s manufacturing facility and offices.
The forces ordered employees to leave and shut off the water and electricity when some refused to do so. Executives, who were Chinese nationals were forced to resign or face consequences from Rugao's government, Saleen told FOX Business. The remaining employees were terminated.
Saleen Automotive Inc.
Two employees, Frank Sterzer, a German national who was vice president of manufacturing, and Grace Yin Xu, a Chinese national in charge of corporate affairs, were detained.
While Sterzer was released after six hours when he contacted the German Embassy with a cellphone that wasn’t confiscated, Yin Xu was held for a month after she refused to corroborate the local government’s claims that Wang tried to embezzle money.
Rugao authorities also claimed Saleen’s technology was worthless and false information was given to secure a higher valuation, he told FOX Business.
Without Saleen’s knowledge, officials had previously filed 510 patents for the intellectual properties he developed – 120 of which were already awarded, including his signature supercharger. Many of the filings didn’t even list Saleen as the inventor.
The shareholder who represented the city’s one-third stake held an illegal board meeting and removed Saleen and Wang as directors of the firm, leaving the foreign shareholders without representation, he said. Under Chinese corporate law, a board meeting cannot be held without a quorum of 51 percent of shareholders.
Saleen Automotive Inc.
The Rugao government didn’t comment when reached by FOX Business. Efforts to obtain comment from China’s Ministry of Foreign Affairs, located in Beijing, were unsuccessful, and a spokesperson from the U.S. Commerce Department didn't respond to a request from FOX Business.
While chances are slim for a resolution on the mainland, Saleen and Wang have an avenue for arbitration in Hong Kong. Their attorney in the special administrative region said there is a good chance they will win the case, but whether it will be enforceable is “a huge question mark,” according to Wang.
CHINA'S PURCHASES IN TRUMP TRADE DEAL MISSING TARGET
The irony is that as Saleen's company was being taken over, the U.S. and China were putting the finishing touches on a phase one trade deal for which President Trump had been pushing since taking office.
The initial agreement included promises from Beijing to halt intellectual property theft, and a second phase -- now in limbo as tensions between the two countries mount -- was supposed to hone in on those commitments.
Should it come about despite Trump's criticism of China's handling of COVID-19, a highly contagious disease first observed in the country late last year, and its crackdown on civil liberties in Hong Kong, Saleen has some ideas of what it should include.
He says Chinese firms that infringe on intellectual property should be blocked from U.S. capital markets, asset valuations by Chinese companies that operate in the U.S. should be prohibited and that entities and individuals should be held accountable for any intellectual property infringement with both civil and criminal liability.
He also believes Chinese cars should be blocked from the U.S. market unless they are part of a joint venture with an American company.
CLICK HERE TO READ MORE ON FOX BUSINESS
Saleen, who worries it is “too late” for him and his partners, thinks his experience serves as a warning for anyone who is thinking about doing business in China.
“If it can happen to me, it can literally happen to anyone,” Saleen said. "If this wasn't happening in real-time, you would think that it was actually a Hollywood movie."
Source>https://www.foxbusiness.com/markets/china-coronavirus-nationalize-america-owned-car-company
Posted by theodore miraldi at 11:19 AM