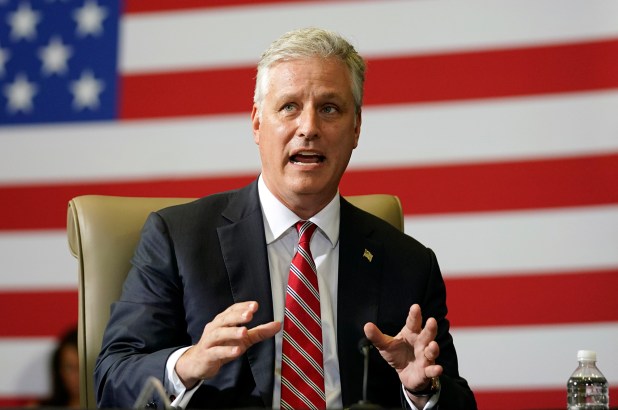 
Chinese hackers have targeted US election infrastructure, the White House’s national security adviser warned Sunday.
“They’d like to see the President lose,” Robert O’Brien told CBS News’ “Face The Nation.” “China — like Russia, like Iran — they’ve engaged in cyberattacks and phishing and that sort of thing with respect to our election infrastructure, with respect to websites and that sort of thing.”
“It’s a real concern,” O’Brien said, saying hackers have been trying to access government websites as well as “influence operations, whether it’s on TikTok or Twitter and other spaces.”
He said President Trump has made enemies by being “tougher on China than any president in history.”
“Whether it’s China, Russia or Iran, we’re not going to put up with it,” O’Brien vowed in his first TV interview since recovering from the coronavirus.
“And there will be severe consequences with any country that attempts to interfere with our free and fair election,” he said.
“Whether their leaders prefer Joe Biden or prefer Donald Trump, it doesn’t matter. We’re Americans.
“We’re not going to have foreign countries deciding who our next president is going to be. That’s outrageous.”
In an apparent direct message to the accused nations, he again said, “Don’t get involved in our elections … Don’t do it because there will be severe consequences.”
O’Brien said the Trump administration had “made it very clear” to Russia to stay out of the election, despite a report from the Office of the Director of National Intelligence on Friday saying the Kremlin was trying to “denigrate” Joe Biden’s bid while giving a “boost” to Trump’s campaign.
“There’s almost nothing we can sanction left of the Russians,” O’Brien said, insisting that “no administration has been tougher” on the nation since its apparent meddling in the 2016 election.
“We’ve sanctioned the heck out of the Russians — individuals, companies, the government,” he said.
“We’ve kicked out literally scores of Russian spies. We’ve closed down all their consulates on the West Coast. We closed down diplomatic facilities. There’s not a lot left we can do with the Russians,” he said.
Source>https://nypost.com/2020/08/09/chinese-hackers-threaten-us-election-infrastructure-wh-adviser/
Posted by theodore miraldi at 12:07 PM