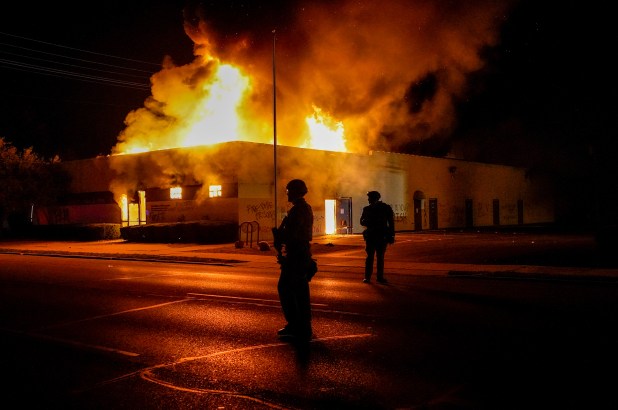 Police stand near a Department of Corrections building set ablaze amid protests in Kenosha, Wis., after the police shooting of Jacob Blake. AP Photo/Morry Gash

An army of lawyers descended on the Wisconsin city of Kenosha on Tuesday to prey on the family of Jacob Blake and fan the flames of mob violence.
Sure enough, a few hours later, two people were shot dead in another night of rioting, arson and destruction, spurred on by politicians, lawyers and other faithless opportunists.
Another Democrat-run American city suffering at the hands of the violent BLM-Antifa wing of the Democratic Party, which has been deputized to influence the outcome of the November election.
After two nights of mayhem, the predatory attorneys, led by George Floyd lawyer Ben Crump, staged a press conference designed to maximize anger about Sunday’s police shooting of Blake, who reportedly was wanted on warrants for domestic violence and sexual assault, and appeared on video to be resisting arrest.
“Shot at least seven times. In the back,” thundered Crump. “How many more examples of police brutality do we need to eventuate change?
“Let’s see if our marching … is making a change.”

Sorry, that’s not the way things work. Guilt and innocence are decided in a courtroom, not by armchair amateurs on the basis of phone footage.
A Chicago lawyer to itemize in gory detail all Blake’s injuries, as Blake’s family howled in distress behind him.
Crump then declared he had consulted Biden running mate Kamala Harris and the congressional Black caucus and would be joining the Rev. Al Sharpton next week on a Black Lives Matter march on Washington.
“We can’t lose this moment to this other pandemic of racism and discrimination.”
It was all rage with no solutions.
But, of all the lawyers and family members who said their piece on Tuesday, one person called for calm and condemned the violence.
The Christian charity of Julia Jackson, Blake’s mother, was a rebuke to all the irresponsible politicians and lawyers who have done nothing but incite violence this summer. Jackson had come from praying with her hospitalized son and the police officer guarding him, and said she was “quite frankly disgusted,” at the destruction in the city.
“That doesn’t reflect my son or my family … As his mother, please don’t burn up property and cause havoc and tear your own homes down in my son’s name.”
She didn’t rush to judgment on the police, but called for prayer and ‘healing.”
What a fool she made of Wisconsin Gov. Tony Evers, who rushed out a statement Sunday condemning the police without evidence. Blake “is not the first Black man or person to have been … mercilessly killed at the hands of … law enforcement.”
On Tuesday, Ivers excused two nights of violence and destruction as the “pain, anguish, and exhaustion of being Black.”
What an insult, to claim lawless violence is a symptom of “being Black.”

Biden was no better, leaping to judgment Monday in a grievance-mongering statement: “We are at an inflection point. We must dismantle systemic racism.”
It wasn’t until Wednesday, after the violence turned deadly, that Biden gingerly followed Jackson’s example: “Violence that endangers lives, violence that guts businesses … is wrong.”
It wasn’t much, but it was the most forceful statement he has made in four months of civil unrest.
Scott Walker, the former Republican governor of Wisconsin, who was narrowly beaten by Evers last year, says the rhetoric of Democratic leaders this summer, “actually helped spur those involved with the riots.”
But it will backfire on them at the presidential election which could be won or lost in what he calls the “bellwether” Wisconsin towns of Kenosha, Racine, Sheboygan and Oshkosh.
“These are not typical Republicans voters … They’re blue collar, working class, socially somewhat conservative [with] a lot of Catholic and Lutheran households. [They] are worked up about the violence and upset about the perception that the Governor and Biden didn’t do enough to push back on it.
“The irony is there are people here who absolutely hate the president … but the overreach [from protesters] may very well help him win Wisconsin.”
Walker says the swing state, which Trump narrowly won in 2016, will likely determine 2020 as well.
Having cynically leveraged the George Floyd protests to their electoral advantage in May, the Democratic narrative that President Trump is a racist looked to be paying off, as Biden’s poll numbers rose.
Their leaders, from Barack Obama to Seattle Mayor Jenny “Summer of Love” Durkan gave the green light to anarchy.
In a summer of madness, cities have been trashed and people killed, and crime rates have spiraled out of control as police were demonized, defunded, and demoralized.

No Democratic leader called for calm. Instead they blamed Trump.
Obama, the one man who could have made a difference, last week used his convention speech actually to praise “the young people who led us this summer … You can give our democracy new meaning … take it to a better place.”
For Democrats, violence is a means to an end. Only it’s not working anymore. The polls are turning, and even Don Lemon on CNN finally said this week that the “rioting has got to stop.”
Not because it inflicts pain on blameless small business owners, not because it hurts black communities more than anyone. No, it’s because, said Lemon, “I know it’s showing up in the polling.”
Yet it is, but it’s too late for the Democrats to put their genie back in the bottle. They own it.

New York’s clown mayor could have allowed gyms to open this week, after the governor issued the green light.
But Mayor de Blasio wanted us to suffer a little longer. It is not just laziness and incompetence that has him dragging the chain on reopening the city.
He’s drunk on the power he has over our lives.
We found out Tuesday that he is in no hurry to allow restaurants to stay afloat by reinstating indoor dining because, somehow, it’s a class issue.
Indoor dining, he said at his press briefing, “is obviously a very optional activity, which some people do a lot who have the resources and others can’t do at all because they don’t have the resources.”
Going out to eat and drink is an integral part of life for New Yorkers, rich or poor, and their meals would be cheaper if de Blasio didn’t gouge them with such high taxes.
It’s not an optional activity for restaurant owners, who are on their knees, and their staffers, who are unemployed. It’s everything to the city.
Source>https://nypost.com/2020/08/26/craven-democrats-invite-violence-devine/
Posted by theodore miraldi at 11:09 AM