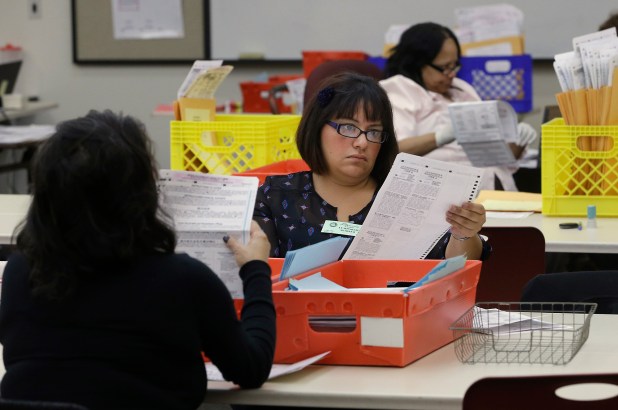 President Trump rightly points out that mail-in-ballot canvassers will be overwhelmed in November. AP


A fundamental and tragic fact of life in America today is that whatever President Trump is for, most media and half the country instantly reject. Even when he’s clearly right, the zombie-like resistance leaps into frenetic opposition.
Take the case of universal mail-in voting.
Trump insists that the plans of some states, such as California and Colorado, to counter the pandemic by mailing a ballot to every registered voter is a formula for disaster. It will, the president says, guarantee mayhem and cast doubts on the November results.
Nonsense, shout the usual suspects. That’s unfounded, he’s making it up, there’s no evidence, blah blah blah.
Ah, but there is evidence. Lots of it, and right in front of us, thanks to the continuing saga of two New York congressional races. Five weeks after the Democratic primaries, no winners have been declared. Results for two others were delayed for three weeks.
The major problem was the volume of mailed-in ballots — more than 400,000 across the city, against the 23,000 received and validated four years ago, The Washington Post reports. The Board of Elections, creaky, sloppy and unreliable on the best of days, is swamped.
In the race involving Democratic incumbent Carolyn Maloney and challenger Suraj Patel, in-person voting gave Maloney an edge of under 700 votes. But some 65,000 voters returned the absentee ballots they requested, and mailed ballots trigger additional safeguards and requirements.

Among those are proof the ballots were mailed by Election Day and received within seven days of the election. In the Maloney-Patel race, at least 12,000 mailed ballots have been invalidated, many because they were received too late and others because they had no postmark to prove when they were mailed.
State officials, who included pre-stamped return envelopes when they sent the ballots, apparently didn’t know that such envelopes often don’t get postmarked. Thus, there is no way to know if those ballots were marked and mailed by Election Day.
In some cases, ballots were returned late because election officials did not send them to voters until the day before the primary. Some lacked signatures and ran afoul of other technicalities.
One clear result: lawsuits. So judges will have the final say about which votes are counted. Already an estimated 28 percent of the votes from the Brooklyn portion of the district have been tossed out.
That’s smoking-gun evidence of chaos and grounds to doubt the accuracy of the final outcome. Now imagine the enormous opportunity for mischief and mistakes if every state opts for universal mail-in and 160 million ballots are mailed to registered voters and back to election offices in the fall.
Nothing like it has ever been attempted, so to assume it would go smoothly is beyond foolish. Indeed, it would be a miracle if it weren’t a disaster.
And not just for the presidential election. Congressional, state and local races all could be upended by ballot issues and disputes. By comparison, fights over hanging chads in one state would seem like a walk in the park.
So Trump wins the argument, right? On the merits, he does, but he doesn’t make it easy for himself or his supporters.

Can Trump delay the 2020 presidential election?

Sometimes a tweet is just a tweet, and sometimes it’s an exploding ­cigar. He specializes in the latter.
The president, who has cited the New York cases as examples, drew heated attention by tweeting a suggestion that the November election be delayed because a national mail-in plan would cause the most “fraudulent election in history.”
“It will be a great embarrassment to the USA,” Trump wrote. “Delay the Election until people can properly, securely and safely vote???”
In a nanosecond, the chattering class declared the end of the world was near. Even some allies were alarmed, with Steven Calabresi, co-founder of the Federalist Society, calling for a new impeachment of the president.
Eight hours later, Trump said never mind, suggesting the initial tweet was intentional misdirection. “Glad I was able to get the very dishonest LameStream Media to finally start talking about the RISKS to our Democracy from dangerous Universal Mail-In-Voting…” he tweeted.
In a later press conference, he went further, saying “Do I want to see a date change? No,” Trump said, “but I don’t want to see a crooked election.”
Whew, emergency over. But not the damage to Trump.
The incident was a good example of how his instinctive habit of poking the hornet’s nest can result in his getting stung and valid policies getting overshadowed. His suggestion that he might try to delay the election allowed many on the left to claim they are right to worry that Trump won’t leave office voluntarily if he loses. His clarification notwithstanding, you can bet they won’t let go of the incident.
Of course, the backlash also proved that the media don’t want to confront the obvious problems of mail-in ballots — for the obvious reason. Many are openly hostile to Trump and don’t seem to mind whether the results are trustworthy nearly as much as they want the ­result to be that Joe Biden wins.
So while the president got them talking about the issue, what they were saying, and still are, is that Trump is a threat to democracy.
He’s not. That dishonor belongs to those who can’t see straight ­because of their hatred for him.
The left’s endorsement of riots, its support for China and its disdain for the police, American history and culture are tearing this country apart. And now the same people are willing to let the election be thrown into chaos because Trump dared to point out problems.
No tweet, no matter how off-key, can match the danger of their madness.

Wokestan has come up with a new demand: “sensitivity reads.” That’s what a union representing 1,200 New York Times employees wants from the paper.
The NewsGuild said the extra layer of vetting before stories are published would make the Gray Lady’s content “more diverse and equitable.”
The idea itself is bizarre, but doubly so because it reveals that Times employees turned to the union to interfere in editorial decisions and shape how stories are written.
What will they think of next?
Wait, don’t tell me. I don’t want to know.

No excuse for crime

Reader Lydia DiBello says Mayor de Blasio is way off base in making excuses for the violent crime wave gripping New York. She writes: “My great-grandparents, grandparents and parents survived hot weather with no air conditioning, stock-market collapses, financial distress, pandemics, world wars and rationing of food and materials. None of them turned to murder and shootings to ease their frustrations.”

Block those metaphors!
Headline from The Boston Globe:
As temperatures rise, a ‘nightmare’ of toxic algae plagues the hidden gems of Cape Cod.
Source>https://nypost.com/2020/08/01/a-national-mail-in-ballot-election-would-be-a-disaster-goodwin/
Posted by theodore miraldi at 2:34 PM