Pennsylvania Gov. Tom Wolf has called for his resignation 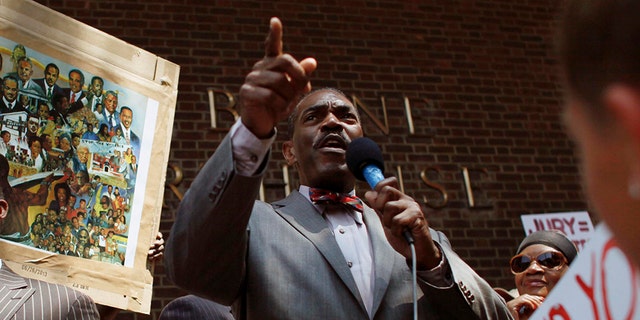 The NAACP is not parting ways with Philadelphia chapter President Rodney Muhammad after he shared an anti-Semitic social media post, even after many including Pennsylvania Gov. Tom Wolf called for his resignation.
"While Mr. Muhammad now recognizes the offensive nature of the imagery and post, we are saddened and deeply disappointed by the harm caused by Mr. Muhammad's actions," the NAACP said in a statement on Thursday, the Philadelphia Tribune reported.
UK'S LABOUR TO PAY WHISTLEBLOWERS OVER ANTI-SEMITISM CLAIMS PLAGUING PARTY
"The NAACP, Pennsylvania State Conference, and Philadelphia Branch unequivocally denounce and condemn all anti-Semitic language and images and stand against all forms of hate speech," the statement continued.
In this July 20, 2013 file photo, Minister Rodney Muhammad speaks to the crowd during the "Justice for Trayvon" rally, outside the federal courthouse in Philadelphia. (AP Photo/ Joseph Kaczmarek, File)
NAACP President Derrick Johnson and Muhammad will meet with community and faith leaders to "continue the educational conversations needed to strengthen our communities," the NAACP said according to the Philadelphia Tribune.
In July, Muhammad posted a meme that showed several Black celebrities who have recently faced backlash for anti-Semitic comments along with a caricature of a Jewish man. The meme included the quote "To learn who rules over you, simply find out who you are not allowed to criticize," and attributed it to the French writer Voltaire. The quote is actually attributed to neo-Nazi Kevin Strom.
BIDEN REMARK ON AFRICAN AMERICAN VS. LATINO 'ATTITUDES' SPARKS CONCERNS
Muhammad could be voted out in November or removed when the state conference executive committee meets on Aug. 15, according to the Philadelphia Tribune.
The Jewish Federation of Greater Philadelphia will not work with the NAACP's Philadelphia chapter as long as Muhammad remains in place, the Pittsburgh Jewish Chronicle reported.
Muhammad is the minister of the Delaware Valley area for Mosque no. 12 as well as a consultant for Philadelphia Mayor Jim Kenney, the Philadelphia Tribune reported.
CLICK HERE TO GET THE FOX NEWS APP
Gov. Wolf, a Democrat, called for Muhammad to resign on July 28.
"The anti-Semitic meme shared by Philadelphia NAACP president Minister Rodney Muhammad is vile," Wolf wrote on Twitter. "Sharing this type of racist content is unacceptable — especially from a civic leader. I’m joining the call for Minister Muhammad to resign. Hate has no place in Pennsylvania."
Fox News' inquiry to the NAACP was not immediately returned.
Source>https://www.foxnews.com/politics/naacp-rodney-muhammad-meme-anti-semitism
Posted by theodore miraldi at 3:45 PM