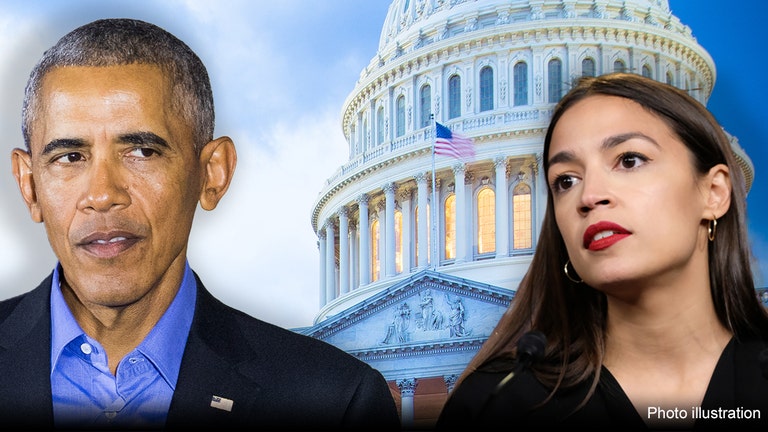 Former President Barack Obama endorsed more than 100 Democratic candidates running for office this November, but didn't offer his support to progressive Rep. Alexandria Ocasio-Cortez.
In a statement on Monday, Obama announced his first wave of support for 118 Democrats running for federal, statewide and state legislative offices from 17 states, including New York, New Jersey, California, Texas, Illinois, Arkansas, Colorado, Indiana, Iowa, Maine, Nebraska and Nevada.
PROGRESSIVE CANDIDATE JAMAAL BOWMAN DEFEATS ELIOT ENGEL IN NEW YORK PRIMARY
"I'm proud to endorse this diverse and hopeful collection of thoughtful, empathetic and highly qualified Democrats," Obama said. "Together, these candidates will help us redeem our country's promise by sticking up for working people, restoring fairness and opportunity to our system, and fighting for the good of all Americans — not just those at the top."
The former president added that the group of candidates makes him "optimistic not just about our party's chances in November but about our country's future so long after that."
"So if you're in one of their districts or states, make sure you vote for them this fall," Obama said. "And if you can, vote early — by mail or in person."
FLASHBACK TO 2018: OBAMA ENDORSES DOZENS OF DEMOCRATIC CANDIDATES, SNUBS AOC
Obama's office said the former president selected candidates because he believed their election to public office would "advance key goals," including winning control of the U.S. Senate, holding the majority in the House, electing Democrats who will "support fair redistricting in 2021," and promoting "diverse, emerging leaders for this time."
Some of the candidates are also alumni of his presidential campaigns and administration.
Obama's office said that the former president plans to issue a second wave of endorsements this fall after the remaining states' primaries have wrapped up.
"Our country's future hangs on this election, and it won't be easy," he said. "But pandemics have a way of cutting through a lot of noise and spin to remind us of what is real, and what is important."
OCASIO-CORTEZ DELIVERS EMOTIONAL FLOOR SPEECH SLAMMING REP. YOHO'S 'ABUSIVE LANGUAGE'
He added: "Elections matter. And we need Americans of all political stripes to get involved in our politics and our public life like never before."
Obama endorsed progressive candidate Jamaal Bowman, a former middle school principal and first-time candidate who toppled longtime Rep. Eliot Engle in New York’s Democratic primary in June.
Despite Bowman being backed by Ocasio-Cortez, D-N.Y., Obama did not offer her his endorsement.
In 2018, ahead of the midterms, Obama initially fell short of offering Ocasio-Cortez his support after she ousted longtime former Democratic Caucus Chairman Joe Crowley.
Obama ultimately offered his support for Ocasio-Cortez in 2018 just ahead of the midterm elections.
Also included in Obama’s endorsements are former Democratic presidential candidate and Colorado Gov. John Hickenlooper for U.S. Senate; former Obama aide and incumbent Rep. Andy Kim from New Jersey; and incumbent members of Congress, Katie Porter of California; Max Rose of New York; Antonio Delgado of New York; and Joe Cunningham of South Carolina.
Meanwhile, Obama formally endorsed Joe Biden – his vice president and running mate through two terms and presidential campaigns – stepping off the sidelines in April after withholding support for any candidate for months.
"Choosing Joe to be my vice president was one of the best decisions I ever made, and he became a close friend. And I believe Joe has all the qualities we need in a president right now," Obama said in April.
Source>https://www.foxnews.com/politics/obama-candidate-endorsements-aoc
Posted by theodore miraldi at 12:27 PM