Pelosi BLASTS Trump for Saying He May Deliver Convention Speech From White House: 'He CAN'T Do That' 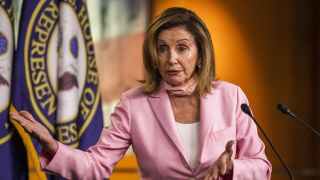 House Speaker Nancy Pelosi slammed President Trump for suggesting that he would deliver his convention acceptance speech from the White House South Lawn, calling the proposed move "very wrong."
"For the President of the United States to degrade once again the White House, as he has done over and over again, by saying he's going to completely politicize it, is something that should be rejected right out of hand," Pelosi, D-Calif., said during an interview on MSNBC.
"It's not serious thinking," she said. "It won't happen, whether it's legally wrong or ethically out of the question, it shouldn't have been something that was expressed."
TRUMP CAMPAIGN CONSIDERING POSSIBLE CONVENTION ACCEPTANCE SPEECH FROM WHITE HOUSE LAWN
Earlier in the day, during an interview on "Fox & Friends," Trump confirmed that his re-election campaign was exploring several options for the site of his Republican National Convention nomination acceptance speech later this month, including the South Lawn.
"We're thinking about it," Trump said. "It would be the easiest from the standpoint of security. You know these, they move with a lot of people, it's a very expensive operation militarily. And law enforcement-wise. The Secret Service is fantastic. But it's a big deal."
The possibility that Trump may deliver one of his most high-profile speeches at the White House has raised questions over whether it's a violation of the Hatch Act, which prohibits federal government employees from participating in partisan political activity -- although the president and vice president are exempt.
TRUMP, IN 'FOX & FRIENDS' INTERVIEW, WARNS IT COULD TAKE YEARS TO GET ELECTION RESULTS WITH MASS-MAILED BALLOTS
“I think anything you do on federal property would seem to be problematic,” Sen. John Thune, R, S-D., told reporters this week.
At the end of July, Trump abruptly canceled RNC events that were scheduled to take place in Jacksonville, Fla. amid a resurgence of coronavirus cases in the state. His decision to do so came just weeks after he moved the event from North Carolina after a health safety-related dispute with the state's Democratic governor.
Several hundred Republican delegates will still meet in Charlotte to nominate Trump, whose address is scheduled to take place the final night of the three-day event, which runs from Aug. 24-27.
BIDEN CAMPAIGN SHELLING OUT $280M FOR 15-STATE AD BUY
The Democratic National Convention Committee on Wednesday announced the party's event will be completely virtual, with presumptive nominee Joe Biden no longer traveling to Milwaukee to deliver the acceptance speech. Biden will now deliver his keynote speech in his home state of Delaware, according to a news release.
Source>https://www.foxnews.com/politics/pelosi-blasts-trump-convention-speech-white-house-cant-do
Posted by theodore miraldi at 4:56 PM